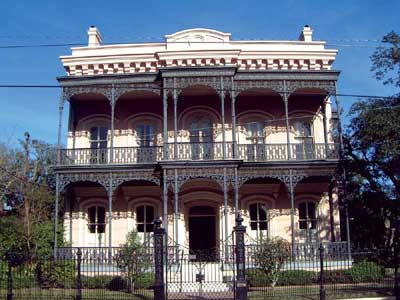 Like everyone I have been very saddened by the devastation of New Orleans by Hurricane Katrina in recent weeks. I was there in January 2003 when I attended the conference of the Archaeological Institute of America. It was held, as are all American conferences, in one of the big hotels devoted to conferences and conventions in the modern part of the city.

It was a very satisfactory meeting from my own point of view in that I met the people from Archaeology, the hugely successful magazine of the AIA with 230,000 subscribers, including the editor, Peter Young, whom I already knew, Mark Rose the Assistant Editor, and also the publisher Phyllis Katz. During an evening on a river boat, I also met up with Hershell Shanks, the charismatic editor and owner of their great rival, the Biblical Archaeological Review and Odyssey. The former, with a circulation of 150,000, brings all the latest news of Biblical archaeology – and is proving particularly popular in the Bible belt of America.

However, there was also time to slip away from the conference to explore New Orleans. I had a couple of good walks around the French Quarter where I learnt to study the fantastic iron work of their balconies and to distinguish between the wrought iron work – early and plain – and the cast iron work – late and elaborate.

I also took a tourist coach around the city. It took us out to one of the amazing cemeteries – St Louis No. 3 as I recall – lying on the edge of New Orleans. There we found some interesting burial practices.

Because New Orleans, as we all now know, is situated below the sea level, burials all had to be made in elaborate tombs above ground. The tombs are all communal – that is, they are either family tombs or they are owned by groups. They each have two tiers. The dead are first placed in the upper tier, where they remain for a year and a day. The tomb is then opened up, the remains are then put in a bag, breaking the bones if necessary, and shot into the lower part. If a family member dies while the upper tomb is occupied, they are placed in a special wall box elsewhere in the cemetery until the upper part of their own tomb becomes vacant.

The tombs support no elaborate inscriptions, though the name with the date of birth and death is added to a plaque on the front. When the plaque is full of names, it is moved to the side of the tomb and a fresh plaque is added to the front. (As a good archaeologist, I listened to all this avidly; I hope I have stated it correctly – but if any of our learned readers know otherwise, perhaps they could let us know.)

My other lasting recollection is of the friendliness of the inhabitants. On my last afternoon, deciding to explore the Garden District, which is the wealthy 19th century suburb of New Orleans and has many fine houses, I took the tram out, or as they call it, the streetcar. However, having misread the map and alighted from the streetcar rather more hurriedly than expected, I suddenly realised my bag had been left behind. After a quick panic, I had an inspiration and hailed a taxi, and with the immortal words ‘follow that streetcar’, we set off in pursuit. Eventually, we caught up with the streetcar, and the taxi driver deliberately parked himself across the tramlines causing it to stop. I boarded it and explained to the driver, and inevitably to most of the passengers, my mishap. And there on the seat was my bag just where it had been left. I grabbed it and triumphantly held it aloft. Everyone burst out cheering and clapping at the antics of this mad Englishman. They were a very friendly lot and I do hope that they soon succeed in bringing their beautiful city back to life.