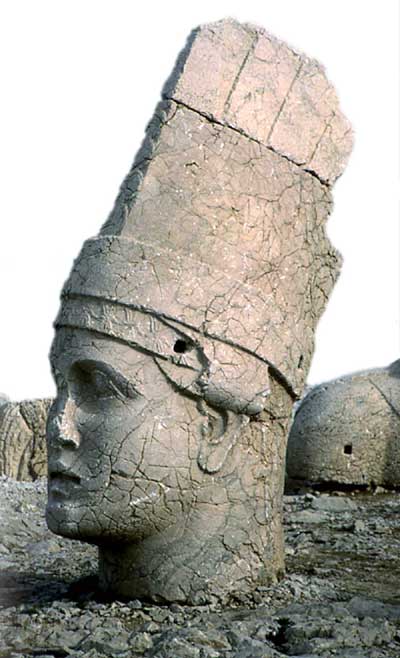 St John Simpson is a curator at the British Museum and has travelled and excavated extensively across the Middle East and Central Asia. He was at Nemrut Dag just as the snows were melting in early spring last year.

What is so special about Nemrut Dag?

Nemrut Dag is quite simply one of the most spectacular sites in the world. It is a World Heritage Site and has iconic status in Turkey today. It was built in the 1st century BC by a local dynast called Antiochus I who ruled a small but wealthy kingdom in south-east Turkey called Commagene.

Antiochus played superpower politics with Parthia and Rome, claimed family descent from Alexander on his mother’s side and Darius I on his father’s side, and deified himself. The site is a tomb-sanctuary (hierothesion in Greek) and monument to himself and his extended family.

The mountain top on which it sits was not considered high enough so he topped it with a pyramid-sized mound lined around the outside with sculptures and massive statues showing himself and some of his immediate and divine family members. These combine Classical and eastern religion and dress, and underline how Antiochus viewed himself on the world stage. Commagene is therefore fascinating in appreciating the importance of south-east Turkey and charting its shifting relations with its eastern and western neighbours.

What archaeological work has been done at the site?

The site was rediscovered by a German road engineer in the 1881 and explored on and off by German, Turkish and American archaeologists ever since. The question of where the presumed tomb in the centre lies has fascinated researchers but no traces have yet been found. Future use of ground-penetrating radar might give us an answer.

The sheer size of the mound and sculptures, the spectacular views in every direction, and the visual effect of clouds scudding across the bodies of the statues and massive crows wheeling overhead combine to make you feel like a very small person indeed. That was clearly the intention of its builder.

What advice do you have for people wishing to visit the site?

The site attracts lots of visitors in the summer who come mainly to see the sunrise or sunset. The trick is to get there just as the early crowd are leaving bleary-eyed and freezing cold and then you have the most of the place to yourself. Spring is a good time to visit and the best thing is to spend a day before-hand visiting the Commagenian citadel of Arsameia and royal monument at Karakus and overnight as close as you can to Nemrut Dag. Too many people try and see it at the end of a very long tiring journey from other parts of Turkey and therefore lose some of the magic of the moment.

Which museum can readers visit to see more?

The site is effectively an open-air museum but there are other sculptures from Commagene in many different museums in Turkey: the nearest is at Gaziantep where many of the spectacular Roman mosaics from the nearby site of Zeugma are beautifully displayed. Zeugma is now partly drowned beneath the Ataturk dam which also flooded the heartland of Antiochus’ kingdom and his capital at Samsat.

What plans are afoot for Nemrut Dag?

The sculptures are totally exposed to the elements. Many of the sculptures are carved in low relief and the surfaces are prone to laminating. Although visitors are controlled, the effects of snow, frost, wind and rain can be pretty devastating. However, plans are now underway to restore some of the more damaged pieces. This impressive site should thus be protected for future generations. It’s what Antiochus would have wanted.