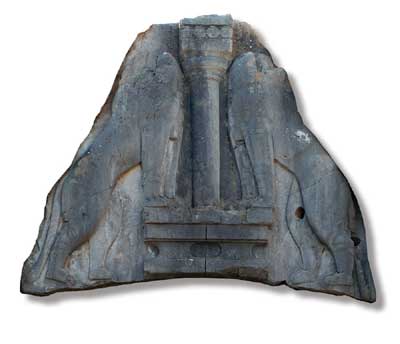 Mycenae is one of the most evocative archaeological sites in the world. In Homer’s Iliad it is the seat of Agamemnon, the leader of the Greek forces in the war against Troy and thus, by implication, the leading town in Homeric Greece. However, it was Heinrich Schliemann who, in the 19th century, really put Mycenae on the map. Believing in the Homeric legends, he went to Mycenae and excavated inside the citadel walls. There he not only discovered a set of spectacularly rich graves, but also brought to light a long forgotten civilisation of the Aegean Bronze Age, a civilisation we now call Mycenaean. But what is there at Mycenae for the modern visitor to see? Andrew Selkirk takes us on a tour of the site.

Through the Lion Gate: entering Mycenae

Mycenae lies somewhat off the modern transport system, about ten miles from the motorway that runs from Athens to Tripoli. The road leads to the modern village of Mycenae, which lies a mile or so from the Late Bronze Age site. The road runs through the village, with its small hotels, friendly tavernas and tourist shops, and then gradually up the east slope of the Panagia ridge. Halfway along this ridge lies the largest and most famous of the tholos tombs at Mycenae: the Treasury of Atreus or Tomb of Agamemnon, as it is called locally. The road goes right past the tomb, ensuring that every tourist to Mycenae visits this masterpiece of Bronze Age architecture.
Its setting is superb too, and it is worth taking a few moments to admire the excellent view of the citadel from the tomb. At the north end of the Panagia ridge is the main car park. The path from the ticket office curves up to the Lion Gate, the main entrance to the citadel. The citadel is magnificent to behold. It occupies a low hill nestling between the two towering peaks of Mts. Profitis Ilias and Zara. The Lion Gate is named after the splendid triangular carved limestone slab over the gate showing two lions facing a single column that represents the Royal House of Mycenae. The Lions were still visible when the travel writer Pausanias visited Mycenae in the 2nd century AD. Pausanias also wrote that the colossal walls surrounding the acropolis hill were built by the Cyclopes, that mythical race of one-eyed giants; hence they are called Cyclopean walls. Near the Lion Gate, the Cyclopean wall is about six metres thick and preserved to over eight metres high. Do not think, though, that the fortifications at Mycenae were all built in one go; they were actually raised in three separate stages.
Before entering the citadel, it is worth diverting to the left, off the main pathway, to visit the excellent new museum and the Lion Tomb. The museum houses an impressive collection of objects from the site, thoughtfully and elegantly displayed. Hidden away to the left is the Lion Tomb, one of the largest tholos tombs at Mycenae, so-called because it is so close to the Lion Gate. Unlike the two tholos tombs on the other side of the road, which face south towards the Argive plain, the Lion Tomb faces north.

Just inside the Lion Gate is Grave Circle A, with its six Shaft Graves. It was here that Schliemann made his remarkable discoveries including the famous ‘Mask of Agamemnon’. He excavated five of the graves; the sixth was found by the Greek archaeologist Stamatakis. The incredible objects retrieved from these large rectangular graves include beautifully inlaid daggers and jewellery, masks and vessels of gold. They are on display in the National Archaeological Museum in Athens. Grave Circle A, clearly the burial place of a ruling elite, was used in the 16th century BC. Its subsequent treatment by the ruling dynasty at Mycenae is intriguing. When the first Cyclopean wall was built at Mycenae in the 14th century BC, the Grave Circle was left outside the walls. However, when the Lion Gate was constructed and the Cyclopean circuit extended in the 13th century BC, the Grave Circle was brought inside the citadel. At that time, it was also remodelled: it was raised to the level of the new acropolis entrance and the circular enclosure wall, visible today, was erected.

The Palace on the hilltop

Moving on, next to Grave Circle A is the Great Ramp. From the top of this ramp a new path winds its way up the west slope of the acropolis hill. Daily, trails of tourists climb up this path to pay homage to the remains of the Palace on the hilltop. There, they are rewarded by some wonderful views and the setting is spectacular. Within the Palace is the Megaron, a large rectangular building facing west onto the Great Court. The Megaron consists of a porch, a vestibule and a large hall, with its central hearth surrounded by four column bases. It perches dramatically above the Chavos, the gorge separating the acropolis hill from Mt. Zara. These remains belong to the 13th century BC. Restoration work was in progress on the Megaron when we visited in 2007 but it should be completed soon and the whole palace once more open to visitors.

From the summit downwards

From the summit, the new path snakes its way down the east side of hill – through the palace’s East Wing. In the north-east corner of the citadel is the underground cistern, a truly amazing feat of Mycenaean engineering that provided the inhabitants of the citadel with a permanent supply of water. A stepped passageway, running down through the Cyclopean wall, entices the visitor into the cistern – but beware: it is dark and slippery inside. If you wish to explore the cistern bring a torch, wear sensible shoes, and venture beyond the first landing at your peril.

Recently, an American expedition has been excavating a structure within the citadel known as Building K. Here a storeroom has been excavated that had been built somewhat carelessly, and seemingly using old materials. Its life was punctuated by earthquakes and was itself built to replace rooms damaged by an earthquake around 1240 BC. However, it was destroyed by another major earthquake around 1200 BC. This earthquake marked the beginning of the end for Mycenae and the Mycenaean civilisation. The following century was a time when civilisations all over the Near East collapsed: perhaps due to warfare; perhaps due to earthquakes; or perhaps due to a myriad of reasons.

Returning to our tour of Mycenae, having seen the structures within the citadel, there are tombs and other buildings outside the fortifications to be visited. Firstly, there are two more tholos tombs to see: the Tombs of Aegisthus and Clytemnestra. They lie to the right hand side (south) of the pathway that approaches the Lion Gate. Of the two, the Tomb of Aegisthus is the earlier. In fact, it is one of the oldest tholos tombs at Mycenae. It has lost the upper part of its stonebuilt burial chamber, though the entrance passage and what remains of the chamber are both extremely impressive. Adjacent lies the so-called Tomb of Clytemnestra, named after the doomed wife of Agamemnon. This was the last tholos tomb erected at Mycenae. It was hidden beneath the theatre built at Mycenae in the Hellenistic period (part of the front row of stone seats of this theatre is preserved), and consequently the tomb remained undetected until the early 19th century. Alerted to the discovery, the Turkish governor, Veli Pasha of Nauplion, broke through its roof in order to plunder the burial chamber. In 1951, restoration work to reconstruct the damaged upper part of this tomb led to the discovery of a second Grave Circle at Mycenae. Containing over 20 graves, Grave Circle B, as it is called, yielded some wonderful objects, such as a rock crystal bowl in the shape of a duck. It is older than Grave Circle A, although for a period of time both circles were used concurrently.

Why were there two Grave Circles at Mycenae? Did a smaller elite group break away from those buried in Grave Circle B to become the ruling clan of Mycenae, burying their own dead in a new Grave Circle constructed closer to the acropolis?

From tomb to town

Moving just south of the Tomb of Clytemnestra are the remains of four Mycenaean buildings known collectively as the Ivory Houses because of the large number of worked ivory objects found within them. The houses also produced Linear B tablets, indicating that they were linked to the bureaucracy of the palace. Ongoing work suggests that there was once a large town in the area below the acropolis and that the excavated houses are only a small part of it.

Christofilis Maggidis of Dickinson College (USA), and Antonia Stamos of the Institute for Aegean Prehistory are heading up a major project to investigate the Mycenaean town. From 2002 to 2006, they carried out a programme of survey by GPR (Ground Penetrating Radar) over a 6 acre area on the valley floor. This revealed two distinct levels. At the top was a Hellenistic town of the 3rd to 2nd centuries BC. There were also indications of structures on a different alignment, running parallel with the Mycenaean road, and presumably marking the layout of an extensive Mycenaean town. As a result, it is suggested that there was a very extensive Mycenaean town, covering up to 30 hectares or 72 acres in extent. Excavations on the site began in 2007, and it is hoped that they will reveal the remains of both these towns. For the hungry traveller, there is much else to see at Mycenae, including further tholos tombs on the other side of the Panagia ridge. While beyond Mycenae, in the Argive plain, there are other impressive Late Bronze Age sites to explore, such as the citadels of Tiryns and Midea, the cemetery at Dendra and the coastal site of Asine. This truly is a magical area!