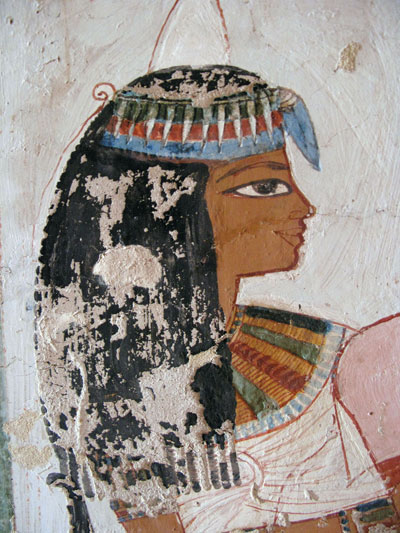 People are always eager to hear about the mysteries of the Valley of the Kings. News from the Valley, where Egypt’s New Kingdom pharaohs were buried, is reported enthusiastically by the media and devoured avidly by the public. The spectacular discovery of the tomb of Tutankhamun in 1922 is largely responsible for the fascination that this ancient necropolis holds for the general public. However, many people do not know that the foothills of the Theban massif, just east of the royal tombs, are filled with unique and beautifully decorated tombs belonging to the people who served the pharaohs. Buried here are viziers, officials, courtiers, and even the workmen and artisans who carved and decorated the sepulchres of the kings. This area is known as the Valley of the Nobles.

The Valley of the Nobles comprises six cemeteries and covers an area of c.9km². Approximately 900 elite tombs from many periods of Egyptian history have been unearthed in these rocky hills, and many more surely remain hidden. Of these, over 400 date from Egypt’s Golden Age (the New Kingdom 1550-1100 BC, i.e. dynasties 18 to 20) and contain some of Egypt’s greatest ancient art-work. While some of these Theban private tombs are well known, and contain familiar scenes, others have been lost almost completely to the eyes of the world, or are closed to the public and are visited only sporadically by scholars.

In addition, some have been hidden under villages built above them over the past few hundred years. Of these modern villages, the most famous is el-Qurna, just west of the Ramesseum. It was here that local people began to construct houses soon after foreign adventurers came to the Luxor area in their quest to rediscover the royal and private tombs. A number of the more notorious inhabitants of el-Qurna were well-known antiquities dealers and tomb robbers, since one of the reasons that houses were built on top of the tombs was so that they could be raided in secret.

The location of villages directly above the tombs has created many problems. For example, a two-storey house was built over the beautifully decorated tomb of Amenhotep Huy, Viceroy of Kush under Tutankhamun; water from this house has done a great deal of damage to the decoration of the tomb chapel. Another person had dug a tunnel from his house to a nearby private tomb so that he could use it to store stolen antiquities. Others used the tombs beneath their houses as animal pens.

I used to visit the Valley of the Nobles, and look at the houses in the villages that lie above the tombs. I knew that the people dug tunnels from these houses to reach the burials below them, and used the tomb chambers to store the artefacts they had stolen. I still find it astonishing to consider how much of modern Egypt is built literally on top of its ancient past, threatening its survival for the future.

After many years of struggling to work with the villagers of el-Qurna, we devised a new plan. The Supreme Council of Antiquities, of which I am Secretary General, set aside over 180 million Egyptian pounds, which we used to build a new village about 2km to the north, at el-Tarif. Thanks to this, we have both saved the tombs and taken care of the villagers. In the process, we have revealed some of the most spectacular art known from Ancient Egypt. Now, let us take a tour of some of the New Kingdom tombs found in the Valley of the Nobles.