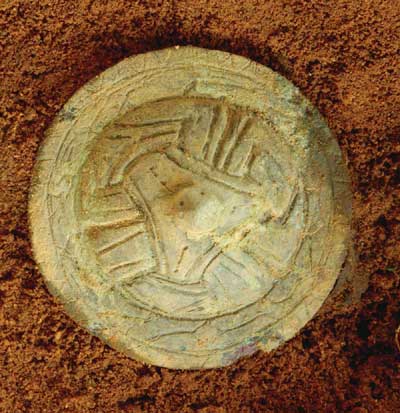 The little town of Húsavík in northern Iceland is known as a centre for tourist whale-watching boat trips. A thousand years ago a rather different journey by boat was being taken, as Howell Roberts reveals.

Some 10km to the south of the modern town of Húsavík lies the abandoned farmstead of Litlu-Núpar, nestling between a bowl of hills and the Laxa (literally, the Salmon River). The hay fields are long since overgrown, and blueberry bushes now cover the slopes, but the ruins of buildings and boundary walls are still plain to the eye. Recent research has provided evidence of human activity all the way back to the settlement of Iceland late in the 9th century AD. The most spectacular evidence came last August when our team unearthed the remains of a Viking period boat burial.

An extraordinary burial emerges
In 2004, our team of international archaeologists located at least two pagan burials in the area of Litlu- Núpar. However, we recognised that several others probably also existed on the high ground overlooking the farm ruins. In 2006, we evaluated a number of the farmstead’s turf ruins; then in 2007 and 2008, we targeted several of the potential burials. Like many of the pagan burials in Iceland, these graves were pinpointed by shallow, linear hollows – clear evidence of robbing in antiquity.

Despite this, the first of our trenches revealed more than we could have hoped for. Cut through the orange subsoil and white volcanic tephra layers was a curved tapering form some 7.1m long and 1.7m wide, aligned roughly north to south. As we began excavating, the occasional rusted nail came to light, along with a few pieces of disturbed human bone. But as progress was made, the occasional nail became a continuous stream of clench bolts, nails, roves and other corroded iron objects. Very soon we realised that we had discovered something out of the ordinary – the first boat burial discovered in Iceland for over 40 years, and only the fifth secure example ever found here.

At the end of the excavation, we had located and removed 223 boat nails and other iron objects delineating the elegantly curved form of a small boat at least 6.5m in length, 1.15m wide and 0.45m deep. A dark stain along the centre of the grave marked the line of the keel. At the centre of the boat, although heavily disturbed and very poorly preserved, we found the bones of at least three people. Two are probably males and one seems to be a female.
Among the jumbled bones we also found a large glossy round shale bead, and a small, delicate hexagonal conical bronze bell, decorated with tiny rings and dots. Four such bells have been found in Iceland and these artefacts speak of connections to places far from the cold arctic shores of Húsavík, perhaps to Britain where similar bells have been found, both in northern England and Scotland.