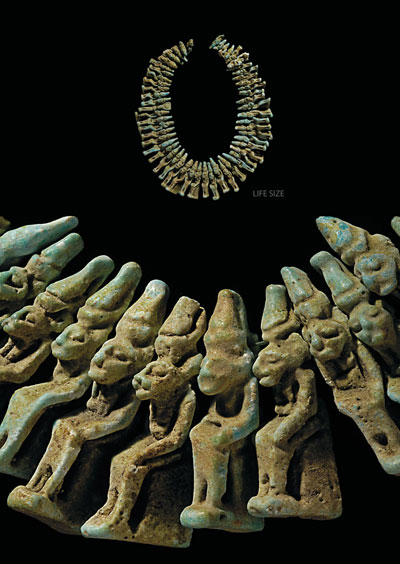 The Greek ‘Dark Ages’ – no, one must not call them ‘Dark Ages’ because at Lefkandi, Professor Irene Lemos has thrown a bright new light on the whole period.

Lefkandi is hidden away in Euboea, the Greek island that no tourist ever goes to; yet it was from here that many of the earliest Greek colonies went out and it was also from here that the first recorded war in Greek history was fought. Indeed, Lefkandi is the key to the whole story of the transition from Mycenean to Classical Greece.

To understand this transition, first a few words on the chronology: the end of the Mycenaean period is known to aficionados as the LH IIIC, that is the Late Helladic 3C. LH IIIB was the latest ‘proper’ Mycenaean period, but at the end of this period the palaces were collapsing and many sites abandoned. Following the LH IIIC, there was a D*** A** (c.1100-750BC), when sites were deserted and most of our evidence comes from rather poor cemeteries: the pottery, though wheel-made, was badly made, and is known as Sub Mycenaean or SM. Then around 1000 BC, things revived a little, and an era began when a new style of pottery appeared, the Protogeometric or PG, with its austere geometric decoration that is so attractive to the modern eye. It was only really in the Geometric period, from the 8th century BC onwards, that the revival began on a larger scale, and the cities of Archaic Greece were founded. This, presumably, was the time when Homer lived.

In this shady Post-Mycenaean period, Euboea played a leading role. Euboea is the largest of the Greek islands after Crete, long and thin and sprawling along the east coast of mainland Greece; indeed, at one point it comes so close that the gap can be bridged.

There are now two modern road bridges across the narrow stretch of water known as the Euripus (which has seven tides a day). Though Euboea is virtually unknown to the foreign tourist, it is a favourite weekend getaway for Athenians, being less than an hour down the modern fast motorway. There are two major indications that Euboea was important in the Dark Ages. Firstly, Thucydides, in his masterly brief sketch of early Greek history, says that all early wars were local wars except for that fought between Chalcis and Eretria, the two leading towns of Euboea, into which all Greek cities were drawn on one side or another. It was subsequently known as the Lelantine War as it was fought over the very fertile Lelantine plain which lies between Chalcis and Eretria. Secondly, there is the question of the Greek colonies. In the 8th and 7th century, the Greeks established colonies all round the eastern Mediterranean. These colonies all remembered their mother cities, and in a surprising number of cases the mother cities were Chalcis and Eretria. In Classical Greece they were both only medium size cities, but clearly in the colonising period, they had become the leading cities in Greece.

Euboea, therefore, is the obvious place to attempt to understand the Greek Dark Ages, so in the 1960s, Hugh Shackett and Mervyn Popham and the British School at Athens set out to do a survey and field walking on the whole of the island. Two sites in particular produced lots of Bronze Age and Dark Age pottery: Lefkandi and Amarynthos. The more promising appeared to be Amarynthos, which the Greek Archaeological Service therefore reserved for themselves but have not yet fully excavated. Lefkandi was left to the British; but it is Lefkandi that has produced the goods.

Today, Lefkandi is a burgeoning seaside resort. Half way along the road from Chalcis to Eretria, is the small town of Vasiliko, two miles inland from the coast: Lefkandi is its seaside extension. It had local ambitious mayors who permitted developments up to five storeys high – which not everyone approves of, but as a result it is developing fast. It has a fine beach and superb accommodation for the archaeologists, who can go out of the hotel/dig house, cross the road and be on the beach. The excavation is run as a training dig for a large number of students from UK universities, inspiring them to continue with archaeology.