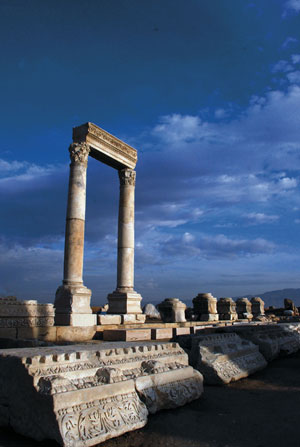 Yet more exciting excavations are taking place at the city of Laodicea, about 120km east of Ephesus, on the western border of the ancient Phrygian region of West Anatolia. Laodicea is well sited on a high plateau and surrounded by the rivers Lycos, Kapros and Asopos. Little wonder the city has an ancient history: our excavations in the area have revealed architecture, pottery, obsidian and flint stone finds dating back to the 4th millennium BC.

However, much of what one sees today comes from the Hellenistic, Roman and Byzantine periods – including the largest ancient stadium in Anatolia (measuring 280m by 70m), two theatres, four bathhouse complexes, four agoras, six fountains (nymphaea), two monumental portals, a council house (bouleuterion), temples, and monumental streets. It is also surrounded by cemeteries on four sides. The city itself covers an area of about 5km2 and was designed on the Hippodamic, or grid, plan where the streets cross at right angles or run parallel to each other. The main streets are flanked on both sides with porticoes and shops behind them, while sanitation was provided by the sewers that run under the roads.

Laodicea has an interesting history: the Hellenistic city was founded by the Seleucid King Antiochus II in the mid 3rd century BC, and named after his wife Laodike. With the Battle of Magnesia in 190 BC and the Treaty of Apamea (modern Dinar) signed in 188 BC, the region passed to the Pergamene Kingdom, and finally, in 133 BC the last Pergamene king ceded the region to Rome in his will. From the 4th-6th centuries AD, it became one of the metropolitan must-sees of the Byzantine world since it contained one of the Seven Churches mentioned in the Book of Revelation. The city also grew wealthy because it lay on the crossroads of trade routes, and did a roaring trade in textiles.

Alas, its favourable location was also its downfall: it lies in a first degree earthquake zone, and the city was damaged many times and rebuilt many times. Indeed, it was finally abandoned after a severe earthquake in the reign of Emperor Focas (r.AD 602-610 AD). Its waterways were damaged, and it was then subjected to raids, first by the Sassanids, and then by the Arabs. Following its abandonment, Laodicea served as a stone and lime quarry.

As for our latest work, since 2003, we have focused on three main areas. Firstly, we explored the East Byzantine Gate, which was constructed by the Emperors Theodosius (r.AD 378-395) and Arcadius (r.AD 395-408) to protect the city. It lies on Syria Street – a 900m main thoroughfare that stretches out from the city centre, and is flanked on both sides by urban blocks (insulae) 42m wide and 51m deep.

Our second project has been to unearth and restore a 400m section of Syria Street (a stretch running from the Caracalla Fountain to the East Byzantine Gate). We have been able to identify the various construction phases related to the earthquake of 494 AD and up to the abandonment of the city.

Finally, we have excavated the impressive Temple A, on the north side of Syria Street. It lies within a rectangular courtyard surrounded with porticoes (58m by 42.33m with 54 columns) The walls behind these porticoes contain niches, while the floor of the courtyard is entirely paved with marble slabs. The temple is prostyle with four spirally fluted columns in the front and measures 27.75m by 13.60m. It is a glorious structure, built with travertine blocks on a high podium and faced with marble.

Last season, our finds included a stunning prima porta style statue of Emperor Augustus and Aphrodite, latrine vestibule mosaics decorated with wild goats, heads of Zeus, Artemis and Attis, a relief of a rider god, plus a great deal of ceramics, glasses, metal objects and coins. During the forthcoming 2010 season, we will complete the restoration of Temple A and begin work on Nymphaeum A, and on the central church, just on the south side of Syrian Street.

In the meantime, this wonderful site is open to the public, and visitors can see buildings such as Temple A, the agora, the stadium, bouleuterion, baths, latrine and Ephesus Gate.