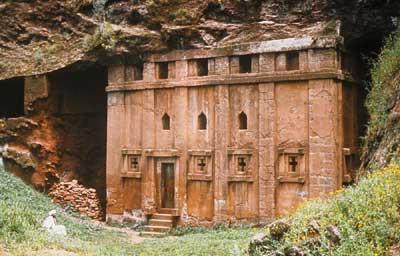 High in the mountains of northern Ethiopia, Lalibela is one of the most important pilgrimage places of the Ethiopian Orthodox Church. Lalibela is famed for its 11 Medieval churches, all of which are hewn into the rock. These exceptional buildings are said to have been built during the 25 year reign of King Lalibela – with more than a little help from the angels. But archaeologists question miracles; and here, David Phillipson, Professor of African Archaeology at Cambridge, introduces us to the wonders of Lalibela and offers a new interpretation of its chronology and creation.

The Lalibela churches are carved, inside and out, from soft volcanic rock. Their architecture is extremely diverse: some stand as isolated blocks in deep pits, while others have been cut into the face of a cliff. It is much more difficult to establish a sequence or chronology for a rock-hewn building than for a conventional one, especially when – as at Lalibela – it is still in regular religious use. Not only are the Lalibela churches more refined and accomplished works than other rock-hewn monuments in other parts of the north Ethiopian highlands, they also form interconnecting complexes which provide evidence for their development and chronological order. Church tradition recognises the huge task represented by the cutting of these churches and their associated trenches, passages and tunnels. It explains the completion of the excavation during the reign of a single king by attributing much of the work to angels who, after the workmen had downed tools for the day, came in on the night shift and worked twice as fast as the human workers had done. In this way, work proceeded so fast that all the churches are said to have been completed within the King Lalibela’s quarter-century rule.

New research offers a different explanation. David Phillipson, Professor of African Archaeology at Cambridge, argues that the oldest of the rock-hewn features at Lalibela may date to the 7th or 8th centuries – about 500 years earlier than the traditional dating. These first monuments were not originally churches, although they were subsequently extended in a different architectural style and converted to ecclesiastical use. Later – perhaps around the 12th or 11th century – the finest and most sophisticated churches were added, carved as three- or five-aisled basilicas and retaining many architectural features derived from those of ancient Aksum, which had flourished some 800 – 400 years previously. It is the last phase of Lalibela’s development which may, Phillipson believes, be dated to the reign of the king whose name the place now bears. The church complex was extended and elaborated. Several of the features attributed to this last phase bear names like the Tomb of Adam or the Church of Golgotha which mirror those of places visited by pilgrims to Jerusalem and its environs. This naming has extended to natural features: the seasonal river which flows though the site is known as Yordanos (Jordan) and a nearby hill is Debra Zeit (Mount of Olives). It seems that it was King Lalibela who gave the place its present complexity and form: a substitute for Jerusalem as a place of pilgrimage. It may be significant that, early in King Lalibela’s reign, the Muslim Salah-ad-Din (Saladin) had captured Jerusalem, and for this reason Ethiopians may have felt precluded from making their traditional pilgrimage to the Palestinian Holy Land. Today, a cloth-draped feature in the Church of Golgotha is pointed out as the Tomb of King Lalibela.

It is not known whether this attribution is original or whether pilgrimage to this tomb was a later development. Be that as it may, Lalibela remains to this day a major Ethiopian pilgrimage centre. The influx of numerous tourists in addition to the pilgrims presents major visitor-management problems which are compounded by the poor condition of some churches and the very soft rock from which they are carved. The one church at Lalibela which does not form part of an interconnecting complex is in many ways the most remarkable. This is known as Beta Giyorgis (The House of [Saint] George) and may belong to the most recent of the phases now recognised. It rises from the bottom of a roughly rectangular pit approximately 11m deep, and is approached by an entrance trench some 30m long. It is cruciform in plan and stands on a high stepped plinth. The lower windows, carved according to the Aksumite pattern, are all false and do not penetrate into the church’s interior. The higher windows, one central to each face, are in a distinctive style. However, when viewed from the inside, they do not appear central because no account was taken for the thickness of the wall thus demonstrating that the design was based primarily on external appearances. In a recent lecture to the Society of Antiquaries, Professor Phillipson noted that the chronology which he proposed effectively filled the mysterious 500-year gap which seemed to intervene between the decline of Aksum and the rise of Medieval Ethiopia. He suggested that the contrast between the two periods had been exaggerated by the fact that ancient Aksum had in the past been studied mainly by archaeologists, Medieval Ethiopia by art-historians and by students of traditional history which was increasingly committed to writing from the 13th century onwards.

The earlier archaeological record is based on the site of Aksum. This is one of the world’s great archaeological sites. At its zenith (3rd – 5th centuries AD), it was described by Mani, the famous Zoroastrian prophet of the 3rd century AD, as one of the four great civilisations of the world. Aksum is best known for its field of huge, beautifully carved stelae (obelisks) that mark the subterranean burial places of the kings. One of the pillars, 22m high, which had long ago fallen down and broken into several pieces, was taken away during the short-lived Italian occupation of Ethiopia and re-erected in Rome. It has recently been returned to Aksum and a decision about its final treatment is awaited. Aksum falls into two phases. A pre-Christian period lasted from the 1st to the early 4th centuries when the prevailing religion followed was similar to that practised in South Arabia at that time. It was during this time that the huge obelisks were erected and the accompanying underground tombs created. During a second phase Ethiopia formally adopted Christianity: indeed it was only the second country in the world (after Armenia) to do so. A great church was erected which, after numerous rebuildings and now mainly in 17th century form, is the principal centre of Ethiopian Christianity. Christian Aksum flourished for more than three hundred years, but in the 7th century it declined rapidly, being increasingly isolated from its fellow Christians by the rapid spread of Islam.

David Phillipson is Professor of African Archaeology at Cambridge University. He is a former Director of the British Institute of Archaeology in Eastern Africa, and first visited Ethiopia in 1969. Following on his excavations at Aksum, he has been concerned with working out the sequence at Lalibela. He recently spent a term as visiting professor at the University of Addis Ababa.