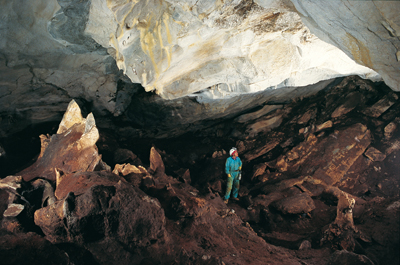 In 1997 four cavers set out to explore the deepest galleries of the Grotta della Monaca. It was not an easy task. Located in the Calabria region of southern Italy, the huge entrance to the cavity hangs over the Esaro River like a brooding black eye. Back then, the only way to reach this forbidding fissure was to scale the near-vertical cliffs rising up to the cave mouth, 600m above sea level. The exhausting climb led to a dark and sinuous cavern, penetrating 355m into the living rock.

Drawn by the cave’s legendary abundance of mineral deposits, the four explorers descended into the furthest reaches of the subterranean complex. Here, veins of iron ore intersect with gaudy splashes of green and blue, the unmistakable signature of copper carbonates deposited by the incessant drip drip of percolating water. Turning from this vivid natural art installation, one of the cavers noticed a curious stone object lying at the base of a rockfall. The distinctive coned head and groove to tether it to a long-decayed organic handle identified the find as a lithic hammer axe. A cursory search produced more axe heads, proof that the mineral deposits have been attracting visitors for thousands of years. But this handful of casual finds was just the beginning. Further study has established the cave as one of the most ancient mines in Europe, with preservation so fine that, in places, the prehistoric miners seem little more than a tea-break away.

The jagged gash in the rock face that forms the Grotta’s threshold still projects an air of mystery, and it certainly excited the curiosity of prehistoric human groups living in the region. As far back as the Palaeolithic this remote site acted as a magnet for human activity, and its twisting subterranean passages and chambers would often have echoed to the sound of prehistoric industry. In its entirety the cave system has preserved evidence for multiple phases of exploitation, spanning almost 20,000 years.

Today, the floor of the first gallery, known as the ‘Pregrotta’, is a confused jumble of tumbled boulders casting crazy shadows where light seeps through the entrance. As every subsequent visitor has passed through this natural hallway, the earliest layers have been severely damaged. Yet even here excavations yielded pockets of undisturbed strata, including a scatter of flint tools near a rich seam of goethite iron ore, and a human ulna (or forearm bone), preserved under a boulder. These vestiges can be securely assigned a Palaeolithic date of about 18,000 ago.

The Pregrotta connects to a low and uncomfortable passage that dives steeply into the bowels of the cave complex. These lowest reaches comprise two key sections: the Sala dei Pipistrelli and Cunicoli Terminali. It is here that traces of prehistoric extraction are most clear. The former chamber, literally ‘the room of the bats’, is named in honour of the huge colony of living stalactites clinging to its ceiling. Overflowing with guano, this jaw-dropping space is 60m long and 30m wide, making it the largest chamber in the subterranean system. The Cunicoli Terminali, or ‘terminal burrows’, are a group of low, narrow fissures that delve into the rock at the far end of the chamber. The longest branch extends for 60m, and it is around these haphazard offshoots that the vibrant deposits of copper carbonate are concentrated.