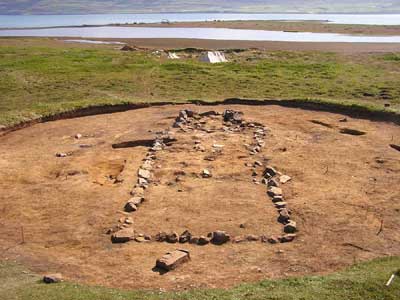 Life in Iceland has never been easy. Long but cool summer days when the sun only dips below the horizon for a couple of hours are followed by dark and freezing winter months. Though there is abundant cod, halibut and haddock in the surrounding seas, Iceland is so far north that it has always been difficult to grow any crops. Indeed, aside from a 200 year climatic upturn around AD 1000, farmers restricted their agricultural output to grass and hay for animals. The Icelanders were therefore dependent upon countries further south for most crops, as well as all metals (except for locally produced iron) and for finer cloth.

The trouble was that until the early 15th century Iceland lay beyond the networks of European and even most Scandinavian trade. Icelanders eagerly awaited the arrival of ships from Norway, though in some years not a single ship arrived, as the annals dolefully record. But in the early 15th century the situation was dramatically transformed by the appearance of fishing ships from England drawn to the Icelandic waters’ abundant shoals, particularly in search of cod, for which there was an almost insatiable market in Europe. Within a few years the number of vessels making the voyage had grown enormously and the English fleets were followed in due course by ships from Germany. In addition to fishing themselves, the foreign vessels also brought goods to exchange for fish caught by the Icelanders who worked the inshore waters from small boats. While the incoming boats brought salt to preserve the fish, Icelandic fishermen dried the fish to prevent it rotting. It was either slit open and laid flat on the ground to dry or suspended from racks, a method still used today. The only other significant product produced in Iceland was coarse cloth that had limited attraction forthose from the south. In return for the dried stockfish, the foreign ships found a ready market for everyday products, such as shoes and knives, and also basic foodstuffs, such as barley meal, malt and butter. These were exchanged at an agreed rate. Iceland used no coins and these imported goods were exchanged at a fixed rate for stockfish.

How not to trade

Since there were no towns in Iceland before the 19th century, trade was therefore largely conducted at seasonal settlements where foreign ships might find Icelanders with goods to trade. Before the 15th century most of the trading sites were in traditional places that had often been used as base-sites for centuries. One of the most important of these, recently excavated by the Fornleifastofnun Íslands (Institute of Archaeology, Reykjavik), was at Gásir on Eyjafjör∂ur in the north of Iceland. There the archaeologists have uncovered large numbers of small turf buildings once occupied by traders who awaited the arrival of ships. They have recorded 14th century buildings and a timber church of the same period, though documents show that the site had been used from at least the mid-12th century.

The arrival of ships from England and Germany led to a thorough change in the pattern of Icelandic trade. Many of these traditional trading sites seem to fall out of use around 1400. It seems that none of the pottery at the aforementioned Gásir is later than this date. Maríuhöfn, another trading site on the edge of Hvalfjör∂ur on the west coast of Iceland, with a similar pattern of turf huts is not know little about them. They were generally too small to be mentioned in written records and often the only way to identify them is from place-names. There are references to English and German, but also rather surprisingly to Dutch, French and even Spanish in the placenames. The identification of the nationality of foreign sailors may not have been very precise. The concentration of these names provides a clear indication of where foreign ships were landing – on Reykjanes, Snæfellsnes and in the West Fjords. As we might expect, there are almost no names along the south coast where there were very few suitable harbours.

All foreign ships needed to land occasionally, even those that brought nothing to trade and were in Icelandic waters only for the fishing. Poor weather drove ships into port, as well as the need for fresh supplies of water and fuel. Ports grew up near to the fishing grounds off south-west Iceland, particularly in the protected deep-water inlets at Hafnarfjör∂ur, Heimaey on the Westman Islands and Grindavík. During the 15th century these became major commercial and fishing bases, with houses occupied during the summer season not only by the English but, from the second half of the century, by German traders as well.

Relationships between the English and the Hanseatic traders from Hamburg and Bremen were not good. Merchants from the two countries competed to sell their goods to the Icelanders and buy locally caught stockfish. There were some violent confrontations. The weapons carried by some of the ships to fight off pirates in Scottish waters could be used equally well on troublesome Icelandic officials or other foreign sailors. In 1532 conflict between the English and Germans reached a new level. Two English ships lying at anchor at Básendar, a rocky inlet in south-west Iceland, were attacked by a ship from Hamburg. The English crews were captured and the ships destroyed. Two months later, a force of Germans sailors crept at night over the fortifications the English had built around the harbour at Grindavík. They surprised the English and seized a ship lying in the harbour. Some 40 English sailors were said to have been killed that summer in Iceland.

As my colleagues and I discovered during our work, little remains of the scenes of these violent events. The landscape around the small inlet at Básendar, a short distance beyond the runway of Keflavík international airport was dramatically altered by a tsunami in 1799. Building work around the modern port of Grindavík has removed all traces of the earlier trading sites there. The same has happened at the ports of Hafnarfjör∂ur and Heimaey. But these were not the only trading sites used by foreigners. They sought out local fishing bases in remote places on the west and north of Iceland where Icelanders had caught and dried fish. These places were visited by ships from Europe keen to obtain supplies by trade.

Our search for these trading sites has been only the first problem in the study made by my university, Queen’s University Belfast, and the Römisch-Germanische Kommission (des Deutschen Archäologischen Instituts). Getting to them, when they are remote from any road, and surveying them is another. We were able to use a Landrover from the Institute of Archaeology in Reykjavík, but there are some places which cannot be reached by any vehicle. The site at Bu∂arhamar is an hour on foot from the nearest track on a remote part of the coast. Differential GPS (Global Positioning System) surveying equipment uses signals from American satellites and allows the sites to be accurately located, even in those areas where there are few landmarks. I still find it hard to imagine that these remote sites, which now seem to be at the end of the earth, were once crucial parts of the network of international trade.