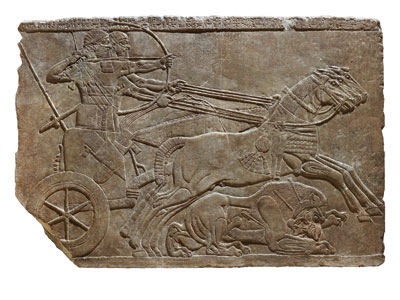 Horses in archaeology: riding through history

The Horse, at the British Museum, is one of this summer’s ‘must-see’ exhibitions, celebrating the 6,000-year-old relationship between humans and equids – and inspiring Chris Catling to examine the immense influence of horses on human history.

It all began not with the horse but with the donkey. One of the earliest depictions of equids that we have is the so-called ‘Standard of Ur’, a wooden box covered with bitumen into which shell and coloured stone has been pressed. The resulting mosaic depicts farming, banqueting, and battle scenes. Excavated from the Royal Cemetery in the Sumerian city of Ur, now in southern Iraq, it dates from around 2600 BC and might originally have been the sounding box of a harp or lyre. It shows in crisp detail among the ruler’s entourage a four-wheeled chariot pulled by four donkeys.

The chariot depicted on the Ur Standard was probably used as a platform from which Sumerian warriors threw spears, having gained the speed to overtake, outflank, and defeat their enemies in battle. Donkeys are good for pulling simple wheeled vehicles in a straight line, goaded with a spiked stick, and pulled up using a simple nose ring and reins. But they are never really going to set the world alight. They are not as biddable nor as fleet as their noble cousin the horse, and once the horse was tamed, the poor donkey was relegated to less prestigious duties.

Beast of burden
Nobody can yet put a definitive date on the domestication of the horse. By 2000 BC, horses are widely depicted in palace-wall reliefs. But the earliest archaeological evidence for the use of horses for both milk and riding has been found in the graves of the Botai culture of Kazakhstan, a country in which horse-rearing traditions run deep and where mare’s milk is still drunk, usually fermented into a mildly alcoholic drink called koumiss. Here, on the grassy plains of the Eurasian steppes, which stretch from Hungary some 6,400 miles to the Mongolian and Chinese borders, people began capturing wild horses and selectively breeding those with desirable characteristics.
The evidence for this comes from comparing the skeletons of horses found in graves with the region’s wild horses. Not only do the domesticated horses have more powerful musculature, they also have wear marks on the teeth showing that they had been bridled. The clincher came when the project team who, between 1994 and 2002, had been studying the archaeology of the horse in Kazakhstan looked for lipid residues in Botai pottery and found the distinctive traces of fats from mares’ milk in ceramics dating from between 3000 and 3500 BC.
These dates are about 1,000 years earlier than previously thought, and there is much work still to be done to understand exactly how, when, and where horses were domesticated, and bridles, saddles, and wheeled vehicles developed; but nobody doubts that the impact was immense. The resulting mobility enabled the horse-using people of Eurasia to cover large distances, and transformed how much they could carry. It has been plausibly argued, by David Anthony and Colin Renfrew among others, that the constant to-and-fro of mobile nomads across the central Asian deserts and steppes was the primary means by which trade goods, technologies, ideas, and even the Indo-European family of languages, now spoken by more than 60 per cent of the world’s population, were disseminated.

Power and prestige
What is fascinating in the story of the relationship between human and horse, from the first domesticated equids onwards, is how often innovation has come not from the ancient centres of agriculture and settlement-based civilisation, but from the people of the marginal lands of the Asian steppes or the deserts of the Nile and Arabia. It is also intriguing to see how these settled civilisations have responded to equestrian innovation by absorbing horsemanship into their own struggle for imperial supremacy, and turning the horse into a symbol of royalty and prestige.
Almost inevitably, the most immediate impact of the horse seems to have been to change the nature of warfare, ushering in what is known as ‘the chariot age’ from about 1600 BC. Archaeologists now attribute the development of military horsemanship and chariot warfare to the Hurrian people of the highland kingdom of Mitanni, a people who lived in the harsh environment of the mountains that today straddle the borders of Turkey, Armenia, Azerbaijan, Iran, and Iraq. Neighbouring aristocrats began to recruit Hurrians into their armies, creating a new high-status class of warriors, who rode in light, fast chariots, armed with bow and arrows, javelins, thrusting spears, and hand weapons.
Remarkably, a number of horse-training manuals have survived from this period, including the 15th-century BC Hittite text, preserved on four clay tablets and marked with 1,080 lines of cuneiform script. It is known as the Kikkuli text, so called because it begins with the name of Kikkuli, who is described as ‘master horse-trainer of the land Mitanni’. The text is remarkable too for being bilingual in parts: when Kikkuli uses technical terms specific to the language of the Hurrian people, he then seeks to find a similar word in the Hittite language. Kikkuli describes how to exercise and feed your war horses to prepare them for battle, and it was by exploiting this expertise from the land of the Mitanni that charioteers were able to forge a huge Hittite empire that included most of Asia Minor by the mid-14th century BC.
Successful technologies travel fast, however, and it was not long before all the ancient kingdoms of the region, and well beyond – into India and China to the east, and North Africa and Greece to the west – had warriors, armour, chariots, horses, and weaponry along the Mitanni model. The degree to which the mobility and muscle power of the horse underpinned the upper levels of society can be assessed from the Amarna letters of the later 2nd millennium BC, in which diplomatic and royal niceties between neighbouring Babylonian kings are recorded.
Written in cuneiform, these letters invariably begin with an expression of good wishes for the ruler’s ‘household, your wives, your sons, your country, your magnates, your horses, and your chariots’.