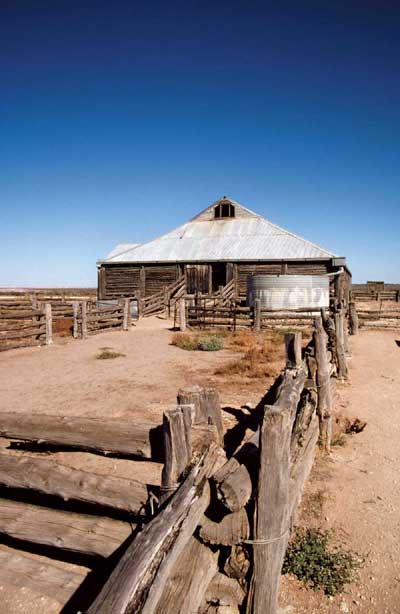 Archaeology is the study of material culture. However, some materials are perhaps more cultured than others. Thus, corrugated iron is nothing more than an ugly, tawdry substitute for proper building materials; think corrugated iron, think British air-raid shelters and old men’s post-war garden sheds, right? In fact, this much maligned material has a surprising and far reaching heritage.

David Miles, chief archaeological advisor to English Heritage, draws on a definitive new book by Adam Mornement and Simon Holloway to consider its unusual history. Miles’ journey begins in an elite palace in Ghana and finishes with a prize-winning architect. Who knew corrugated iron could get so cultured?

Mount Krobo is a 1,000 foot high granite block that rises, sheer, out of the Ghanaian bush (see CWA20). It is topped by the abandoned city of the Krobo people who were driven from their homes by the British army in 1894. Today the remains of traditional houses and workshops cling to the stone terraces which encircle the top of the rock. Dominating the site are the crumbling walls of the palace, still nine or ten feet high in places. Inside lie the fallen remains of the roof incongruously it was made of sheets of corrugated iron, probably imported from Britain. It comes as a surprise to find this cheap, industrial material on the highest status building of a once-wealthy West African people. But it should not.

To my generation, brought up in post-war Britain, corrugated iron was the material of airraid shelters and do-it-yourself sheds on allotments where dig-for-victory vegetable growers stored their tools. Corrugated iron was stuff you took for granted and hardly noticed. It was certainly not the material of monuments. The Emperor Augustus may have claimed that he left Rome a city of marble. You cannot imagine him boasting about corrugated iron. The only connection to the classical world is the name ‘corrugated’ comes from ‘ruga‘ the Latin word for wrinkled.

Yet, in many ways corrugated sheet metal is the archetypal modern material: humble, anonymous and unpretentious maybe, but cheap, strong, durable, easy to transport and erect, and recyclable. Statisticians calculate that it may have sheltered more people in the 20th century than any other building material. At last, it has the recognition it deserves in a beautifully produced and fascinating book entitled Corrugated Iron: Building on the Frontier by Adam Mornement and Simon Holloway 2007(Frances Lincoln Ltd £35).

The rise of corrugated iron

The story starts with Henry Palmer of the London Dock Company who, in 1829, took out a patent for ‘indented or corrugated metallic sheets’. In the late 18th century vast quantities of cargo were arriving up the Thames to London. The tug of the tides often left valuable goods spoilt by the inability to unload them quickly enough into the protection of warehouses. The solution was the London Dock, a new basin connected to the river by locks opened near the Tower of London in 1805. Within was space for 300 vessels; a torrent of wine, spices, coffee, cocoa, ivory, wool and turpentine poured into the world’s consumer capital. But in less than 20 years the London Dock was bursting with the strain and a new dock was needed. Henry Palmer, assistant to Thomas Telford, was given the job of overseeing construction. To solve the problem of roofing massive new warehouses, he came up with light-weight corrugated iron sheets – though he quickly sold on the patent to a carpenter, Richard Walker, who was a contractor in the New Docks. The Turpentine Shed, built about 1830, was the first building to be roofed with iron sheets pressed through fluted rollers. Contemporaries praised its elegance, simplicity and economy, with one commentator describing it as ‘the lightest and strongest roof (for its weight) since the days of Adam’. Other large-span structures followed in the 1840s such as the Eastern Counties Railway Station in East London’s Shoreditch and the Nine Elms gasworks in South London’s Battersea. The roof of Price’s Candle Works in Battersea covered three acres and was later reassembled on the Wirral near Liverpool. Corrugated iron sheets could be easily taken down, transported and used again. They also corroded quickly, but this problem was largely solved by hot-dip galvanizing with tin or zinc, which gave the glitzy sheen popular in America. Corrugated sheets (whether iron, aluminium or other metals) soon became synonymous with railway stations. Lime Street Station in Liverpool had the world’s biggest single arched roof in 1850, fast overtaken by Birmingham New Street, then known appropriately as Grand Central Station and a more majestic spectacle than the grim dungeon that has welcomed visitors to Birmingham since the 1960s.

Walker’s patent ran out in 1843 and competition flooded in to saturate the market with new products: corrugated iron was set to become a world-wide industrial vernacular. London’s Great Exhibition of 1851 provided a platform for the new manufacturers. Victorian energy and imagination were let loose. Royal patronage also helped. The Queen’s consort, Prince Albert, ordered a corrugated iron ballroom for the Balmoral Estate. It still stands, now a joiner’s workshop, and probably the oldest metal sheet building in existence.

The fall of corrugated iron from (aesthetic) grace

Yet this stuff was the product of engineers and of industry: architects saw it as a threat; aesthetes as a travesty. Predictably William Morris, in a pamphlet for the Society for the Protection of Ancient Buildings (1890), railed against the material ‘now spreading like a pestilence over the country’.

Aesthetics did not feature much on the frontiers. By the end of 1849, over 80,000 gold diggers and their hangers-on had arrived in California’s Sacremento Valley. San Francisco was ‘a bawdy, bustling, bedlam of mudholes and shanties’. Prefabricated wooden huts and tents sprouted but corrugated iron buildings were cheaper, fireproof and much more comfortable, according to Peter Naylor who shipped 500 of them from  New York. British manufacturers were not slow off the mark. Edward T Bellhouse of Manchester sent houses of up to 12 rooms, complete with wallpaper and carpets. As the Californian market declined, the Australian gold rush kicked in. Samuel Hemming of Bristol could supply anything from a two-bedroomed cottage to an impressive, £5,000 mansion. Boulton and Paul of Norwich pioneered rabbit-proof fences for  Australia and by the 1880s was supplying corrugated iron churches, gymnasia, hunting lodges, billiard rooms, laundries and farm buildings of every description. Other manufacturers like Francis Morton and Co of Liverpool concentrated on the South and Central American market, supplying workers’ barracks and hospitals to the mining communities of Uruguay, Mexico and Peru and hurricane- proof buildings (they claimed) to the Caribbean. In the 1870s, the South African gold rush opened up another market. At the ‘tin town’ of Pilgrims Rest, Transvaal (now the Province of Mpumalanga) the Royal Hotel’s bar started life as a Catholic Church in Laurenco Marques before being recycled for a more worldly purpose.

All over the British Empire, and in Britain itself, ‘tin tabernacles’ appeared, mission halls, and chapels, to supply the spiritual needs of non-conformist industrial communities. John Ruskin thought them ‘an architectural deceit’. The workers saw nowt wrong with their tin chapels, unburdened by tradition, and inside got on with developing Methodism and the Labour party.

In the 20th century, corrugated iron became synonymous with the military: in 1916 Peter  Nissen’s name entered the English language when he designed the semi-circular sectioned, corrugated iron barrack hut. By the end of World War I, over 100,000 Nissen huts had sheltered over 2,500,000 allied troops. The Americans developed their own version, the Quanset hut. And some of the biggest metal structures of all were built to house the new ill-fated airships, whose fate was sealed by the Hindenburg crash of 1937. The Germans even developed corrugated metal planes like the Junkers ‘J1’. The British responded in World War II by building 2,000,000 corrugated iron air raid shelters in their gardens.

In more recent times, corrugated metal sheeting has provided shelters for millions in the barrios, shanties and bidonvilles (bidon is the French word for a corrugated metal drum) which have sprouted around the mega-cities of South America, Africa and Asia. In disaster areas, metal sheeting is still the ideal material: easily transported, lightweight, it can be erected by the unskilled, bear the weight of snow, be insulated against cold and heat, resist fire, and sold when it has served its purpose.

Remarkably, corrugated metal sheeting has even become fashionable again. In the 1920s, architects like Walter Gropius and Buckminster Fuller experimented with the material. In the 1950s, shiny and streamlined, it suited the ‘desert modernists’ of Palm Springs and the avant-garde architects of California. Pierre Koenig’s Stahl House made this utilitarian material glamorous again. Out of this Californian pedigree emerged Frank Gehry, with his defining style of distorted sheet metal; and probably the most influential and iconic building of the late 20th century, the Guggenheim Museum in Bilbao.

Australia remains the spiritual home of corrugated iron. It has even won acceptance in Aborginal communities who see the sheets as ‘man-made bark’ which touches the earth lightly. No one has done more than Australian architect Glenn Murcutt, the winner of the Pritzker Prize in 2002, who has recruited corrugated iron to the service of world-class architecture.