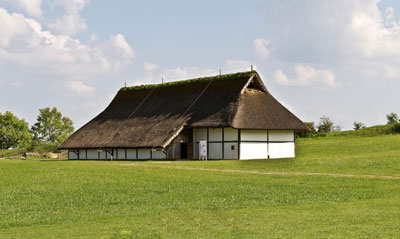 Traditionally, archaeologists considered the Late Iron Age oppida – large fortified sites of the 2nd and 1st centuries BC – to be the first cities north of the Alps. Today, large-scale research projects in Germany and France are challenging this long-established view. We now know that the first urban and proto-urban centres developed here between the end of the 7th century BC and the 5th century BC, in an area stretching from Zavist in Bohemia to Mont Lassois and Bourges in central France.

The best-known and most intensively investigated site is Heuneburg, near Herbertingen in southern Germany. At about the middle of the 5th century BC, the Greek historian Herodotus of Halicarnassus wrote in his famous work Histories (II, 33): ‘The Istros [Danube] river arises among the Celts and the polis of Pyrene, cutting Europe across the middle.’ It has been suggested that Pyrene, the polis mentioned here, is Heuneburg, and that this is the first time that a city in Central Europe is mentioned by name.

While this reference cannot be proved, we can show that the site, located 50 miles (80km) downstream from the source of the Danube, is exceptional. Excavations at Heuneburg are proving that this was the site of one of the most important centres of power in the early Iron Age, a substantial settlement that flourished politically and economically, and which had extensive connections with areas as far away as Etruria and the Greek colonies.

Research into the prehistoric landscape around Heuneburg began in the 19th century, when a number of burial mounds with rich grave goods were discovered at Giebubel-Talhau. They included gold neck and arm rings, the remains of wagons, and bronze vessels. In the first half of the 20th century, further archaeological work concentrated on the tumuli, and in 1937/1938 extensive excavations were conducted on the Hohmichele mound; at 43ft (13m) in height and with a diameter of 263ft (80m), it is one of the largest tumuli in Central Europe.

The first systematic excavations on the 3ha of the Heuneburg plateau, overlooking the Danube, began in 1950. It was soon clear that the results would surpass all expectations. The discovery of a mudbrick wall based on Mediterranean prototypes and probably erected in about 600 BC was spectacular, attracting international attention. The excavations were continued until 1979, above all by Wolfgang Kimmig and Egon Gersbach, and produced further, substantial results. The archaeological material is unusually rich, and allows the reconstruction of 14 building phases of the Late Hallstatt period, together with 10 phases for the fremarkable insight into the development of the settlement on the hilltop plateau, which, in the early Iron Age, was a genuine acropolis. The stratigraphy is extensive, and archaeologists often refer to the settlement as a tell.

For a long time it was thought that the settlement at Heuneburg was mainly confined to this central hilltop. Although as early as the 1950s it was clear that there was also an exterior settlement beneath the tumuli of the Giebubel-Talhau necropolis, this appeared to be no larger than a few hectares. However, new work in the last 20 years has radically changed this picture. The focus is no longer just on the central hilltop, but has been extended to the further surroundings in search of traces of settlement there. The combination of field walking, large-scale excavations, geomagnetic prospection, and high-resolution airborne LIDAR scans has extended our understanding enormously: old theories have been disproved, new ones proposed. The central hilltop was only the tip of the iceberg. The entire settlement at Heuneburg was, in fact, divided into three areas: the citadel (hilltop plateau), the lower town, and the exterior settlement.

The first discovery that changed the picture completely was the realisation that the defences of the lower town were not Medieval, as earlier scholars had for a long time thought. They were, in fact, constructed in the Late Hallstatt period. Evidence for this came partly from stratigraphical observations in the area of what is now a car park of the open-air museum; but above all from the discovery of large quantities of wood in one of the ditches that were dated – through dendrochronological analysis – to the first quarter of the 6th century BC. The timbers were part of a bridge that was built around 590 BC, and remained in use for at least ten years. Evidence suggests it was modified or repaired on several occasions.

A further sensation came with the excavation in 2005-2008 of a monumental stone gate of the Hallstatt period. It was built in the 6th century BC, and, just like the wall on the plateau, it comprised mudbricks on a stone foundation. The gatehouse was extremely impressive: it was more than 52ft 6ins (16m) deep and some 33ft (10m) wide, while internal transverse walls reduced the opening to about 8ft (2.5m). This was a deliberate demonstration of power by the local elite: the gatehouse, integrated as it was into the 16ft-high (5m) rampart, set behind a V-shaped ditch some 46ft (14m) wide by up to 20ft (6m) deep and crossed by a wooden bridge, was clearly designed to make as monumental an impression as was possible.

In addition to all this, work in the area of the lower town has revealed that it was densely settled. Indeed, even unsuitable, steeply sloping areas were carefully terraced so that they could be used to build houses, suggesting that the population here was heavily concentrated, and that there was a shortage of space in the area. As a result, a whole series of artificial terraces were constructed which provided level surfaces for the construction of houses and workshops.

The discoveries relating to the exterior settlement are also of fundamental importance for our understanding of Heuneburg. The results of the new excavations and surveys by Siegfried Kurz indicate that at least during the first half of the 6th century BC, a huge area of some 100ha to the west, north, and south-west of the hilltop plateau was taken up by closely spaced farmsteads, enclosed by rectangular palisades. This huge exterior settlement was divided into smaller quarters by an extensive system of banks and ditches. These, in turn, then enclosed various properties of between 1ha and 1.5ha that were surrounded by massively built timber fences.

Areas of the exterior settlement that were suitable for occupation would have provided sufficient space for about 50 such units, being inhabited by most of the various groups who gradually merged to form a single community. The division of this exterior settlement into separate quarters may also be evidence for the existence of different kinship groups, each inhabiting one of these quarters.

Heuneburg in a new light

Rather than a small hillfort of just a few hectares, as once believed, we can now see that in the first half of the 6th century BC Heuneburg was an enormous settlement of 100ha and at least 5,000 inhabitants.

Both Heuneburg and other contemporary sites like Bourges or Mont Lassois should no longer be described as ‘princely seats’. These are the first urban or proto-urban centres of temperate Europe, ruled by kings and aristocrats whose power and social position is reflected in rich burials such as those at Hohmichele, Bettelbuhl, Hochdorf, Sainte-Colombe, or Vix.

Thus we can conclude that Heuneburg constituted the central place of an important early Iron Age polity, comparable in power and influence to Etruscan city-states of the Archaic Period such as Tarquinia, Veii, or Orvieto. And, given its early date, Heuneburg can therefore be described as the ‘first city north of the Alps’.

Of course, a city is not only defined by the size of its population or the area it covers, but also by other factors, such as the exercise of functions typical of a central place for the surrounding area. However, the extent of the settlement, the presence of imposing monumental structures – the mudbrick wall, stone gate, large building with several rooms nearly 1,000ft² (300m²) in size beneath Giebubel-Talhau Mound 4, for example – as well as indications of significant differences in social status and specialised production, justifies categorising Heuneburg as a ‘town’, at least for the period of the mudbrick wall, c.600/590 to 540/530 BC.

It is important to realise that the extent and the significance of the Late Hallstatt Heuneburg continued to change throughout its less than 200-year occupation. Indeed, the various building phases, fires, and constant restructuring are testimony to an eventful existence with dynamic social changes.

Extensive surveys have revealed that for the 7th to 6th centuries BC there was a scattering of farms and hamlet-like agricultural settlements in the region around Heuneburg.

As the farming settlements prospered, so the population grew and local elites developed. The circle of the most important families and settlement groups was surely responsible for triggering the construction of Heuneburg in the second half of the 7th century BC. The heads of different households and lineage groups must have joined together in a process that led to the construction of the exterior settlement at Heuneburg.

After a first phase of settlement and fortification based on a traditional pattern, a mudbrick wall was built around the 3ha hilltop plateau sometime around or soon after 600 BC. This wall was clearly inspired by Mediterranean prototypes and was unique north of the Alps. It consisted of mudbricks set on a stone base, with rectangular towers incorporated into the defences along the north and west faces

In contrast to the exterior settlement, the actual citadel at Heuneburg was densely built up during the first half of the 6th century BC with relatively uniform, small buildings set in rows, some of which served as workshops. During the mudbrick-wall period, an enormous structure with several rooms was erected outside the citadel on the later site of Mound 4 of the Gieﬂ¸bel-Talhau necropolis. This building, covering 1,050ft² (320m²), shows structural similarities with the Etruscan palaces of Murlo and Acquarossa.