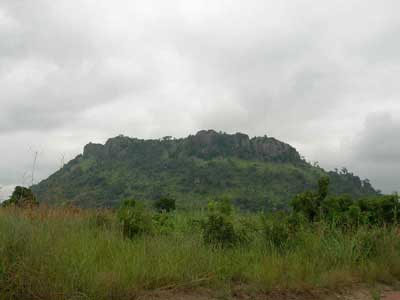 Archaeology in Ghana has been mainly cultivated within the groves of academe – the University of Ghana in Legon even looks like a planned European community with its bungalows and avenues of fine trees. The department is full of students (a whopping 700 first years – entry to university in Ghana is relatively easy but many of the students are allocated a subject and so are dumped onto the archaeology department). But despite the numbers, archaeology graduates have little chance to work in the subject since the job market is seriously limited. Even the National Museum in Accra does not employ any – a fact that is apparent in its disappointing and inadequate displays: a lost opportunity for a country with enormous tourist potential. Indeed, during the conference we hear from Professor James Kwesi Anquandah, one of the grand older men of African archaeology and a great populariser, but who regrets that his fellow countrymen do not appreciate the importance of their heritage. Indeed, Ghana lacks an archaeological voluntary sector or local pressure groups.

So what exactly is Ghana’s tourist potential and what is interesting about its heritage? Some highlights include very early evidence for bipedal hominids, the appearance of an Iron Age two thousand years ago, but then, by about a thousand years ago, Ghana’s rich gold reserves began to stimulate long distance trade that culminated in such sites as the wealthy Krobo city, a sort of “Pompeii of Ghana”, as I describe below.

The ‘slave castles’ of Ghana

At present, most visitors to Ghana are predominantly African American who come to experience the impressive coastal “slave castles”. Back in the 1950s, A. W. Lawrence – brother of Lawrence of Arabia – was the director of the National Museum and Monuments in the Gold Coast. He surveyed the castles and forts of the coast, which he published as The Trade Castles and Forts of West Africa (Jonathan Cape, 1963). Thanks to him many were restored and still stand today. However he was very much criticised at the time for putting his energies into “white” heritage. This is not the view today. Today the forts are seen not simply as points of departure (as popularised by the 1977 U.S. television series Roots based on Arthur Haley’s book of dubious historical accuracy), but also as points of contact between European societies – Portuguese, Dutch, Danes, Swiss, Prussians and British – and the tribal groups of West Africa.

Relations were complex with the Europeans who were dependant upon inland tribes like the Asante for supplies of gold – the English Royal African Company’s exports in 1672 led to the minting of the guinea – ivory, mahogany, pepper, hides, hippo tusks, and, most valuable of all, human beings transported as enslaved labour for the plantations of the Americas. But these exports depended upon the active cooperation and participation of the coastal tribes in return for textiles, beads, mirrors, brass vessels, bracelets, iron weapons, firearms, tobacco, pipes, schnapps, wine, gin and cowrie shells poured into West Africa.

Local kings and traders became seriously wealthy. For the Europeans in the forts, the average life expectancy was four to five years: malaria, yellow fever and dysentery scythed down most arrivals in their first year. The minority who became ‘seasoned’ could have lived long and profitably.

New sites are also appearing from the depths of the sea. Gregory Cook, from the University of West Florida, spoke of the fantastic potential of maritime archaeology. His magnetometer surveys, conducted from a 50ft long Fante canoe, have located over seventy possible hot spots off the Fort of Elmina. The first one he investigated proved to be a wreck from around 1800, probably a Dutch trade vessel which went down while approaching the coast. The cargo consisted of metal vessels, corked stoneware bottles or seltzers containing mineral water, vast numbers of trade beads and cowries from the Indian ocean. The currents off Elmina are vicious but there has been very little modern disturbance to the maritime archaeology; the wrecks are unexplored time-capsules.

Krobo city: The Pompeii of Ghana

To get there, we drove for two hours from Accra. We passed roadsides lined with street sellers trading everything from melons to toilet rolls all balanced on their heads and with the elegance of ballet dancers, and passed wooden shacks belonging to the better-off traders, with shop names such as “The Lord is my Shepherd Saw Sharpening Centre”, and “Noble Dreams Dentures”. Finally, a spectacular granite outcrop rose from the plains: Krobo Mountain, our destination.

The Krobo had vast oil palm plantations, but on their mountain fastness they preferred not to comply with British colonial rule. Therefore, in 1892 the British arrived in force and ejected them from this tribal capital, citing the Krobo’s supposedly murderous ways, though their failure to pay the poll-tax was probably a more pressing reason for the British invasion. Journalist Zagba Oyortey, a Krobo raised on the adjacent mountain slope, accompanied us. He grins wickedly “Oh we did enjoy head-hunting” he says, drawing a line across his throat.

The Krobo were banned from the site until 1992. Since then they have returned annually for pilgrimage to their ancestral home. The site is, however, suffering from grazing, erosion, the spread of elephant grass and casual vandalism. It urgently needs to be surveyed and properly researched and managed.