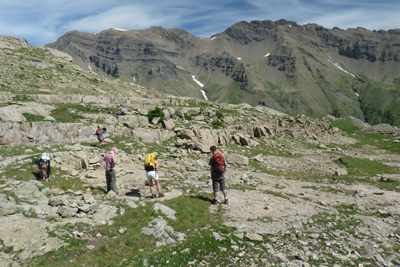 For most people ‘alpine archaeology’ means Ötzi, the ‘Ice Mummy’ found encased in an Italian glacier in 1991. The enduring fame of this sensational iceman is easy to understand, but it is also a shame. The story of Ötzi is one of death at high altitude, and it reinforces the stereotype that mountains are marginal, dangerous places, best avoided.

Yet, there is another, far more complex story to be told, one of how people lived in, and exploited, these mountains. For thousands of years they were as much a place of work as a place of death, and, since 1998, the Southern French Alps Landscapes Project has revolutionised our knowledge of early human activity above the 2,000m mark. Operating in the Ecrins National Park, where glacier-sharpened peaks reach altitudes of 4,100m, a team of archaeologists and palaeoenvironmental scientists from the UK and France have pieced together the evidence for the ten millennia long tale of humans in the mountains.

People have been moving up, and moving through, this area for a very long time. A fleeting glimpse of Upper Palaeolithic activity (c.11,000 BC) is provided by a single, backed-blade flint discarded near a pass leading into the open valley system of the Champsaur. This indicates that hunters seized the opportunity provided by the temporary warm spell towards the end of the last glaciation and ventured into the alpine zone. Such early forays were only the beginning.

Between around 6,000 and 4,000 BC the hunters were back, and in far greater numbers, with organised parties ranging far into the high altitude zone. Clusters of Mesolithic flint scatters at around the 2,200m mark signal the presence of hunting camps set up by small groups lured by the seasonal movements of wild animals. These temporary lodgings were often established on plateaus lying just above what would have been the limit of the forest. Here, above the tree line, hunters could prey on animals migrating upwards in spring and summer to graze on the grasslands. A particularly dramatic example of such a plateau lies at Faravel, where a convenient ledge of level ground nestles between valley and peaks. This natural shelf had a lasting utility, playing host to seasonal occupants from numerous periods.

There are very few sources of flint in the Southern French Alps, and all of the worked stone that we have found in Ecrins was brought in from elsewhere. This is the best evidence we have that Mesolithic hunters incorporated the high altitudes into their seasonal territories, perhaps acquiring the tools of their trade through exchange with neighbouring groups.

The dawn of the Neolithic, a period traditionally characterised by farming and pastoralism, did not bring any respite for animals seeking fodder in the alpine zone. The Faravel Plateau retained its role as a base camp, and an insight into the intensity of the hunting may be gleaned from the endlessly rewarding archaeology of the area. Every time we return to it, new isolated flints or flint scatters are discovered. Our most recent work on the plateau, in the summer of 2010, yielded three new sites, as well as a major discovery: the first Prehistoric rock art in this part of the Alps. A more modest find, though still a record-breaker, was a Neolithic flint arrowhead. Lying at 2,300m, this is the highest arrow in France! While the hunt continued up in the mountains, palynological (study of spores and pollen grains) research has revealed that Neolithic farming and pastoral activities were concentrated at a lower altitude, towards the valley bottoms.

The Chalcolithic (or Copper Age) and Bronze Age witness the most dramatic changes in the way the high altitude zone was exploited. From about 2400 BC onwards, a series of stone enclosures was constructed. Of the many such sites that have been located and recorded by our team, ten examples in the Ecrins have been excavated. Radiocarbon dates place them in the period covering the late 3rd and 2nd millennia BC. Most of these sites share similar characteristics: a stone built enclosure made from large rocks or boulders (normally 20cm-70cm in diameter) arranged into a roughly sub-circular or egg-shape. In some cases, these are sub-divided to create more complex internal spaces. The dry-stone walls normally survive with two or three ‘courses’ of superimposed rocks. The function of these sites that can be inferred from their appearance has been backed up by extensive palaeoecological research undertaken as part of this research project. Essentially, these are the first alpine animal enclosures, signalling the beginning of the transhumance agriculture for which the region is so renowned.