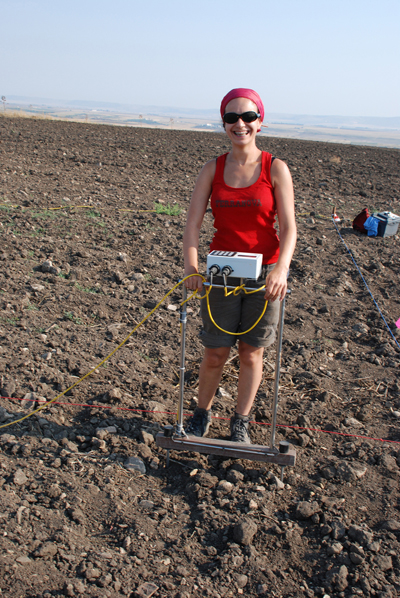 In 1996, Alastair Small and his wife Carola launched a major fieldwalking project to examine the countryside near Gravina. Focusing on the area along the Basentello
River, they undertook ten seasons of survey here, covering an impressive 100km². Small teams of students assisted by local volunteers would scour the fields, walking 15m apart, and subdividing most of the sites into 10m-squares for surface collection. It is field surveys like this that reveal the in-depth picture of what was really happening in the rural economy.

The Late Bronze Age settlements display aspects of what is generally called the proto-Villanovan culture. Named after a type site in northern Italy, the culture is characterised by a distinctive suite of artefacts and cemeteries in the form of extensive urn fields. Clearly, proto-Villanovan influence penetrated in some form down into the south too. But as in so much of Italy between the end of the Bronze Age and the beginning of the Iron Age, there is a break. A thin scatter of pottery indicates a tentative reoccupation of the countryside by the 10th century BC. This takes off in the 8th century, when a massive increase in the quantity of pottery suggests a considerable increase in human activity, before tailing off again in the 6th century. Perhaps part of the population was drawn off to settle in Botromagno, only six miles distant, which was already developing as a proto-city at this time.

The way to San Felice

In the 1980s, the extensive field walking of the upper Basentello valley revealed a major concentration of finds in the vicinity of the Roman site at Vagnari. This newly discovered prehistoric settlement lay on a hilltop plateau and is known as San Felice, after the nearby Medieval hamlet of that name. San Felice proved to be a hive of activity between the 10th to the 3rd centuries BC, with an interesting Medieval re-occupation following a millennium hence. More intensive field walking confirmed and amplified the overall picture, revealing the traces of a well-defined settlement that began to develop in the 10th century BC, before really hitting its stride in the 8th century. Numerous pockets of pottery presumably indicate the position of modest huts and the more substantial individual farms that superseded them. In Britain we might call such a settlement a hillfort, apart from the fact that it was not defended. Unfortunately, heavy ploughing has destroyed the buildings themselves, leaving the concentrated scatters of pottery as the only witness of their existence.

Interpretation of the pottery is also crucial for dating the abandonment of the settlement. Although the chronology is currently controversial, it is traditionally believed that a shift in pottery styles saw black-gloss wares giving way to grey-gloss wares after the end of the 3rd century BC. While black-gloss wares are found in abundance on the San Felice hilltop, the grey-gloss wares appear to be entirely absent.
On the basis of established chronologies, this would suggest that occupation had petered out by the late 3rd century. This approximately correlates with the decade when Hannibal was campaigning in southern Italy. Could the extinguishing of the site at San Felice reflect one of the many brutal acts by Roman and Carthaginian alike that accompanied his invasion?

It is interesting to compare San Felice with Botromagno. While the latter was a town to San Felice’s village, there are clear chronological parallels. At both sites the major settlement begins in the 8th century BC with an expansion that is wholly ‘native’ in character. Although San Felice lacks the rich burials that distinguish Botromagno, both sites display the telltale traces of increasing Greek influence – or, at least, the availability of Greek pottery styles – in the late 6th century BC. And both come more or less to an end in the 3rd century – even if Botromagno limps on for another couple of centuries.

How far is this Hannibal’s revenge? Or perhaps rather, the revenge taken by the Romans on those who had sided with Hannibal? Or could it be part of a longer decline, a loss of energy, as it were, that is at the root of such a marked contrast to the vigorous economic activity occurring in central and northern Italy? The evidence is gradually emerging.