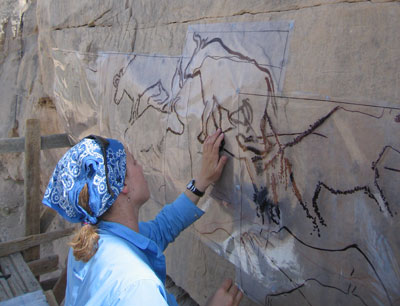 The rock art discovered close to the village of Qurta on the east bank of the Nile is uncannily closer in style to European cave art, as seen at Lascaux in France, than to Egypt’s more typically stylised representations exemplified by the region’s 4th millennium BC Pre-dynastic iconography.

Located in the higher parts of the Nubian sandstone scarp bordering the Nile floodplain, the petroglyphs are hammered and incised naturalistic-style images of wild animals. So far, 185 individual figures have been identified, more than three quarters of which are aurochs (Bos primigenius), followed by birds, hippopotamuses, gazelle, fish, and hartebeest, with some indeterminate creatures (‘monsters’ or hybrids), and several highly stylised representations of human figures. The subject matter, technique and style, their archaeological and geomorphological context, and their patination and degree of weathering all suggest the Qurta rock art dates to the Late Palaeolithic period (c.23,000-11,000 years ago). While this interpretation has met with little criticism from the archaeological community, direct science-based dating evidence was lacking. Until now.

Establishing a date
On our team’s return to the region, we came across partly buried rock art panels at one of the Qurta sites. The deposits covering the rock art, in part composed of wind-blown sediments, were dated using optically stimulated luminescence (OSL) techniques. This method determines the time elapsed since the buried sediment grains were last exposed to sunlight, thereby establishing at what date these areas of the rock art panels were covered over. The result gave us a minimum age of c.15,000 calendar years – providing solid evidence that this is, indeed, Pleistocene Age artwork, the oldest graphic activity ever recorded in the whole of North Africa. It also makes it more or less contemporaneous with European art from the last Ice Age, as at Lascaux and Altamira caves.

However, these OSL results give us a date for when the rock art was buried – its true age may be much greater. It is clear that some of the buried drawings were already considerably weathered before they became covered by sediment, and an age of about 17,000 to 19,000 years is now being proposed. That would make the Qurta rock art more or less contemporaneous with Early Magdalenian and Solutrean art as known from Upper Palaeolithic Western Europe. Further fieldwork in 2011 led to the discovery of several more buried petroglyphs, offering additional dating opportunities, using both OSL and other techniques. Whether or not it will be possible to push back the minimum age
of the rock art still further, remains to be seen – our research is ongoing.

The Qurta rock art is not an entirely isolated occurrence. Five other sites are now known in the same area, all with a limited but homogeneous assemblage of drawings, which display a very similar art, both thematically and stylistically. One site, Abu Tanqura Bahari 11 at el-Hosh, is situated about 10km north of Qurta and on the opposite bank of the Nile; the other four, Wadi Abu Subeira 6, 13, 14, and 20, lie about 45km to the south and on the same bank as Qurta. The el-Hosh site has about 35 drawings, mainly of naturalistically drawn aurochs, but it also seems to include some anthropomorphs similar to the stylised human figures at Qurta. The Wadi Abu Subeira rock art sites are composed of several dozen animal figures: mainly bovids, but also fish, hippopotamuses, and Nubian ibex, as well as, possibly, hartebeest, African wild dog (Lycaon pictus), and Nubian wild ass. None of these other sites, however, offer the dating opportunities that Qurta does.