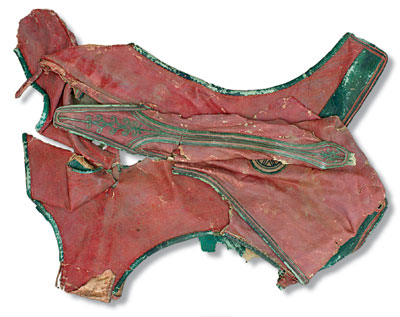 It was autumn 2008. We had just started work on the Ancient Egypt Leatherwork Project (AELP) when we came across the 1957 publication by R J Forbes entitled Studies in Ancient Technology. In it was a black-and-white photograph of ancient chariot trappings and horse harnesses, apparently in good condition and labelled as belonging to the Egyptian Museum in Cairo. We looked for it in the display cases, but it was not there; so we asked the curator responsible for such finds, Ibrahim el Gwaad. He located an entry in his registry books, and finally managed to track down the pieces in the depths of the museum.

Our first glance at the contents of the drawers left us speechless: layer after layer of vividly coloured red leather with bright green appliquÈ decoration, and thicker beige leather with green decoration, lay before us in apparently excellent condition.

We soon realised that we were looking at a unique find: the almost entire casing of an ancient Egyptian chariot – the harness and housing, and parts of the quiver and bow-case that were attached to either side. We knew, too, that this find was the worthy subject of a project in its own right; and so it was that the Egyptian Museum Chariot Project (EMCP) was created, under the umbrella of the AELP.

Enigmatic origins
Although horse-drawn chariots are depicted in Egyptian art, archaeological evidence beyond the wooden frame is rare: being organic, the leather rarely survives. However, there are some examples from the 18th Dynasty tombs of Thutmosis IV, Amenhotep II, and Amenhotep III, the chariot from the tomb of Yuya and Tjuiu (Tutankhamun’s great-grandparents), those from Tutankhamun, as well as the finds from Amarna. Comparison with these remains suggests the chariot may also date to this period, or perhaps into the early 19th Dynasty (1298-1187 BC).

The main problem with this amazing find is the fact that it is unprovenanced. According to the scant information in the Journal d’entrée (a catalogue of the museum’s holdings), it was bought from a well-known dealer in antiquities, Tano, probably in February 1932. Tano came from a long line of antiquities dealers of Cypriot-Greek origin whose shop was first located across from the old Shepheard’s Hotel in Cairo, and then moved to 53 Ibrahim Pasha Street. The shop was founded in 1870 by Marious Panayiotis Tano(s), who supplied the Louvre, the Nicosia Museum, as well as the museums of Marseilles, Rouen, and Lyon. His nephew, Nicolas Tanos continued the tradition, followed by his son Georges Tano, and ultimately his nephew, Phocion Jean Tano. As well as selling objects, the Tano family also donated artefacts to several museums. The leather, thus nicknamed the ‘Tano chariot’, was presumably acquired from Georges – who continued the family tradition and supplied both private collectors and museums, including the British Museum in London.

There is no further information about where or when this trove of leather was found: no records belonging to Tano, if they ever existed, survive. However, the fine condition of the Tano chariot clearly indicates that it must have come from a tomb: leather finds from urban contexts such as Amarna are usually very fragmented, brittle, and overall in far worse condition.