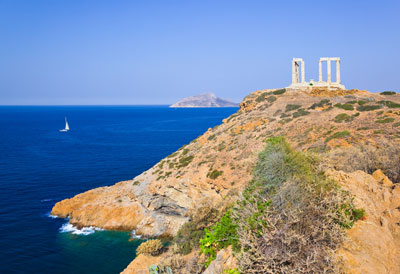 When and why early humans explored the world’s oceans

In the first of a two-part series, Brian Fagan reveals tantalising highlights of the rich and complex history of ancient seafaring. He has combined his love of the sea with a deep-rooted curiosity about our species’ earliest endeavours in his new book Beyond the Blue Horizon. This is no history of caravels, galleys, and galleons, but an investigation into the humble beginnings of ocean voyaging. Why did these intrepid explorers venture out on to the wild unknown seas?

My editor had the idea ten years ago, but it took years of congenial lunches for us to work out how to write a book about how and why ancient seafarers ventured out of sight of land. How does one write a history of ancient seafaring that goes beyond watercraft and navigation to look at motives? In the end, we had an inspiration. Use my own experience of sailing small craft as the catalyst. And it worked. Time and time again, I was struck by how similar my reactions at sea must have been to those of ancient seamen far from shore in outrigger canoes, kayaks, and leather boats.

I learned my seafaring from a Dorset fisherman in an open boat pushing seven decades ago. He measured the state of the tide by looking at exposed rocks, gauged the wind by feeling it on his weathered cheek, and knew almost as much about the local sea bed as he did about the Dorset coastline where he fished. He had learned from his father and grandfather, knowledge that extended back centuries.

In 1879, Danish artist Michael Ancher painted a cluster of Skagen fishermen at breaker’s edge during a storm. They watch an unseen vessel driving helplessly toward shore. Silently, they stare unflinchingly into the biting wind, their expressions as hard and unrelenting as the force of the storm. The very meaning of the ocean is etched into their faces. Eight hundred years earlier, their Norse forebears voyaged the hazardous waters of the North Atlantic without elaborate technology. They were careful, taciturn people, close to the ocean like the Skagen fisherfolk in ways we cannot imagine. No written sailing directions were at hand, just the carefully accumulated knowledge passed orally down countless generations. Such sailors were people apart, at home on the water as on land.

But why did they set forth over the horizon in the first place? An old Norse word aefintyr means ‘venture’, a strong element of risk, and the fear and excitement of facing the unknown and unpredictable. A restless curiosity consumed Norse seafarers, a curiosity that drove other people to sea 50 millennia ago.

Restless curiosity: this seems to have compelled seafaring as early as at least 55,000 years ago, when a raft, or possibly a canoe, crossed open water from mainland Southeast Asia to an island offshore. Soon such voyages were routine. Mariners had reached New Guinea by at least 45,000 years ago, the islands of the Bismarck Strait in the Southwestern Pacific some 15,000 years later. These are relatively calm waters with predictable winds – a voyaging corridor, as it were, that allowed people to sail to islands visible on the distant horizon.

The offshore waters became part of the islanders’ cultural landscapes, as familiar to them as a nearby grove of trees or a convenient fishing stream. This notion of all-encompassing marine and terrestrial landscapes is central to any decoding of ocean waters, whether they be off Southeast Asia, in the stormy North Pacific along the Aleutian Islands, or in the Mediterranean.

Experience – hard-won knowledge of winds and currents, and of long calmer periods when a laden canoe or raft could paddle or sail from one island to the next – was all-important. A watchful skipper would know the telltale signs of impending rainstorms and approaching squalls, of wind shifts and fast-flowing currents close inshore. He would have learned the landmarks visible far offshore, both ahead and astern, that guided the way to safe anchorage. Such lore passed from one generation to the next by oral tradition and ritual wherever early seafarers plied the ocean.

By 25,000 years ago, Late Ice Age seafarers had sailed as far east and south as the Solomon Islands. They were hunters and fisherfolk, clinging to the islands in small camps and rock shelters. Each island community seems to have kept to itself, as they adapted slowly to their new homelands. But this isolation may be an illusion, for about 20,000 years ago we have clear signs of contacts with others. Small obsidian flakes now appear in settlements in the Bismarck Archipelago, tool-making stone carried thither from Mopir and Talasea in New Britain. Since Talasea is a straight-line distance of at least 350km (220 miles) from the Bismarcks, it is clear that the islanders were venturing long distances to obtain useful commodities.

Island life changed dramatically about 1600 BC, with the arrival of strangers – the so-called Lapita folk – in larger, more powerful outrigger canoes, probably with high-peaked woven fibre sails. Their distinctive shell-stamped pottery is a wonderful marker that enables us to trace their voyages from the Bismarcks to the Solomons and far beyond to Fiji, Tonga, and Samoa in Polynesia. We still know little about the Lapita people and can only guess at the ritual exchanges, the volatile relationships, friendships, and enmities that defined their vast island world. They were farmers, so, as crews zigzagged from island to island, they carried seedlings, also chickens, dogs, and pigs, the first domesticated animals to arrive in the Southwestern Pacific. They literally carried their own landscape with them. Above all, canoe skippers could remain at sea for much longer, the pressing limitation now being their ability to carry drinking water. For the first time, Pacific seafarers sailed far out of sight of land, using the seasonal winds and following the east-to-west zenith path of stars that passed overhead – commonly known as latitude sailing.

What was it like to sail in a Lapita canoe? The large watercraft of ancient times have disappeared. Fortunately, the Polish anthropologist Bronislaw Malinowski, who lived among the Trobriand islanders nearly a century ago, experienced fast sailing at first hand: ‘It is a precarious but delightful sensation to sit on the slender body, while the canoe darts on with the float raised, the platform steeply slanting, and water constantly breaking over… and be carried over the waves in a manner almost uncanny.’ He observed canoe-builders at work, the intricate carving they lavished on the hulls, the complex rituals that both surrounded construction and protected the crew against the dangers of seafaring.

Then came the settlement of Central and Eastern Polynesia. Think of a random pattern of islands scattered over thousands of square miles of open water, most of them lying upwind against the prevailing trades, and you can visualise the challenge facing those who first deciphered the vast waters of Eastern Polynesia beyond Samoa. The seafarers paused in Samoa for many centuries. Then, suddenly, there was a burst of voyaging, chronicled by nearly 1,500 radiocarbon dates across Polynesia.

A wave of canoes arrived in the Society Islands between AD 1025 and 1121, in the Marquesas between 1200 and 1400. Other voyagers reached New Zealand between 1230 and 1280, Rapa Nui (Easter Island) between 1200 and 1263, and Hawai’i between 1219 and 1269. The rapid pace of colonisation may account for the remarkable similarities in artefacts such as adzes and fishhooks in places as widely separated as the Societies, Marquesas, and New Zealand. A mere three centuries of ocean voyaging colonised the remotest of islands. If recent research into chicken DNA is confirmed, then there is a possibility that a few Polynesian pilots may even have sailed their canoes to South America and back.

Cherished oral traditions speak of great pilots like Maui, the fisher of lands, and Rata, an expert canoe-builder. Maui snared the sun, fished up islands, and obtained fire, a symbol of the human struggle to harness the forces of nature. Rata, the canoe-builder, perhaps himself a voyager, figures in traditions that may be at least 3,000 years old.

The navigational lore of these and other pilots passed down the generations in the hands of navigators who learned their skills through years of apprenticeship. What prompted such deliberate voyages? Were they quests for religious enlightenment, for the realm of the ancestors, or simply a reflection of those most human of all qualities, curiosity and restlessness? We do not know. Whatever the motivation, to sail eastward towards sunrise into unknown waters was a hazardous enterprise, given the prevailing northeasterly trades.

Much of the Polynesian story is familiar, that of Aegean seafaring less well known. The Aegean is an island-crowded sea, compact and challenging to traverse because of the strong winds and short, steep waves that can assault you from several directions at once. Unpredictable Aegean waters with their prolonged calms were, above all, a paddler’s and oarsman’s world, and it was human power that propelled warships and large merchant vessels for much of the time in later millennia. We can be almost certain that the first crossings from mainland to island were in small dugouts, in vessels commonly used in sheltered water, paddled offshore on calm days and moonlit nights when safe passages for 24km to 32km (15 to 20 miles) were feasible – provided one could reach shelter before the wind came up.