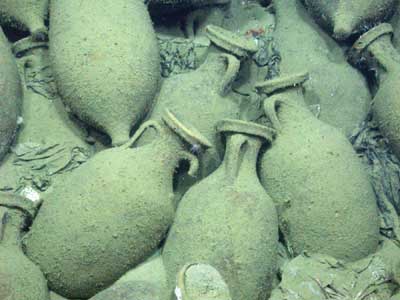 The Florida-based company, Odyssey Marine Exploration, has been at work on the wreckage of HMS Sussex lost in the Straits of Gibraltar in 1694. After three years of total media blackout, their findings are about to be made public. So what exactly have they been up to? Sean Kingsley breaks the silence.

When Odyssey Marine Exploration announced the discovery in 2001 of the possible wreckage of HMS Sussex, a third-rate, 80-cannon Royal Navy warship, the world’s archaeologists reached for their guns. Lost in 1694 in the stormy currents of the Straits of Gibraltar, Sussex was England’s last roll of the dice to prevent the Duke of Savoy, an infamous mercenary, from allying with France in the Nine Years War. Savoy’s army was available to the highest bidder and Britain took the bait. The lottery, however, backfired spectacularly. As a French consul in Livorno contently reported, ‘The Admiral Ship of England…was lost in the storm…There was on the ship a million Piastres of which 800,000 were for the Duke of Savoy…’

Various media reports have estimated that £2.6 billion of gold – some nine tons – were locked in Sussex‘s hold when she disappeared off the face of the earth. Her Majesty’s Government signed a complex agreement with Odyssey to recover this high-value cargo, but on the condition that the wreck was excavated scientifically. The world’s archaeologists presumed that this ‘science’ would be the usual kind of tokenism pursued by marine salvors. After all, not only has ICOMOS, UNESCO and the Institute of Field Archaeology not formulated any best-practice guides for deep-sea shipwrecks, but at 821 metres the site is impossibly inaccessible.

Odyssey was accused of contravening Article 2.7 of UNESCO’s Convention on the Protection of Underwater Cultural Heritage and its expanded Rule 2 to the Annex, whereby ‘The commercial exploitation of underwater cultural heritage for trade or speculation or its irretrievable dispersal is fundamentally incompatible with the protection and proper management of underwater cultural heritage. Underwater cultural heritage shall not be traded, sold, bought or bartered as commercial goods.’ Uncomfortable questions were fired across the House of Commons and the Australian Institute for Maritime Archaeology called the project a ‘horror story’. Carlos Leon, an exasperated Spanish marine archaeologist, summarised he scholarly cynicism by bluntly asserting, ‘Let’s not fool ourselves. This is not an archaeological expedition. You cannot use divers at 900 metres so you have to rely on robots and sonar. This is gold fever.’ Odyssey was tarred guilty until proven innocent.

After three years of media blackout, exactly what this Florida-based company got up to in the murky depths of the western Mediterranean Sea is about to be made public. It is now finally possible to call the company to account and peer behind the scenes of this horror story.

The Sussex Shipwreck Project on site E-82 took place between 8 December 2005 and 19 January 2006, when 286 hours of dives using a 7.26-ton remotely-operated vehicle (ROV) were conducted. Some 223 hours of live video coverage and 9,329 photographs were collated. ROV Zeus, the eyes and hands of Odyssey, was equipped with two manipulator arms and a suction limpet with changeable pressure, capable of safely lifting anything from a glass to a 45 kilogram artefact. Odyssey’s pioneering proprietary SeRF™ system (Sediment Removal and Filtration System) filters sediments through a sieve screen mounted on the back of the ROV to recover very small finds and ecofacts.

The non-disturbance phase of the project (Phase 1, Stage 1A), included two bathymetric surveys, the production of two photomosaics based on 3,544 photographs and a master site plan, and measurements of all visible structure and artefacts in situ. Each artefact was tied into an electronic grid superimposed over the site, ever-present on one of the archaeologist’s plasma video screens to ensure the control of contextual data. This was complemented by a comprehensive environmental and marine biological site assessment directed by Richard Bates and Fernando Tempera of Topaz Environment and Marine Ltd from the School of Geography and Geosciences at the University of St Andrews.

The post-excavation analyses brought together Jacqui Pearce of Museum of London Archaeology to interpret the pottery, Alyson Tobin and Jill McVee of the University of St Andrews to assess the wood samples, while Brian Lavery, Curator Emeritus at the National Maritime Museum, Greenwich, oversaw the naval history. The project was directed by Neil Cunningham Dobson and Hawk Tolson for Odyssey Marine Exploration, with Anthony Martin of Gifford Ltd as the Principal Investigator. Wessex Archaeology monitored operations on behalf of Her Majesty’s Government.

The wreck lies to the south-east of Gibraltar at a depth of 821m. The bathymetric survey revealed that the site occupies a relatively flat seabed gently sloping to the northwest by 3 degrees, with a maximum amplitude of 2.32m across a 60m by 30m area. Some 54 core samples demonstrated that the seabed is composed of a 2-10cm-thick layer of soft brown mud with persistent bioturbation and orange, concretion-stained lenses above 10-30cm-deep grey clay.

The wreck is home to 40 distinct epibethnic megafaunal life forms belonging to six different phyla, from anemones to shrimp, hermit crabs, diamond back squid, white starfish, electric rays and blackbelly rosefish. The sea urchin Cidaridae sp. was selected to investigate the ecological role of the site as a marine oasis. With densities of 2.018 individuals per square metre over the hard bottom and 0.013 individuals per square metre over the soft bottom, a 158-fold difference exists between the two habitats. Fernando Tempera considers the amount of biofouling trivial and the necessity for conservation non-problematic.