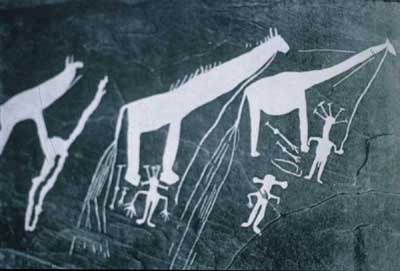 Work in the Dakhleh Oasis has been carried out since the 1970s by the Dakhleh Oasis Project (DOP). This was formed when Tony Mills, then a curator at the Royal Ontario Museum, became aware of how little was known about the environmental background to sites in Egypt. He realised that an oasis, such as Dakhleh, with relatively little contact with the wider world, formed a discrete area for such a study, and visited there in 1977. His aim was to try to determine, and so understand, the relationship between human activity and environmental change throughout time within the oasis.

The story began half a million years ago when Dakhleh was part of a huge lake, 10m deep, and a thick layer of fertile silt. The basis of today’s farming accumulated on the lake bed. The original allure of the oasis was the large fresh water lakes, which attracted animals such as elephant, antelope and buffalo. Stone tools, dating from 400,000 years ago have been discovered – the original remains of hunters whose presence is shown by flint-working sites on terraces above the lakes where they used to pass their time while waiting for the animals to appear. Since Dakhleh lies on one of the possible routes from central Africa to the Near East, it would be extremely interesting to know who made these tools so that we can piece together the jigsaw of early human dissemination.

The first permanent occupation came around 6800 BC: semi-permanent huts of this period have been discovered with grinding stones, scrapers and axe-heads. There were also cattlebones and enclosures for animals, suggesting that domestication and the pastoral way of life had taken place in Dakhleh 2000 years earlier than in the Nile Valley. Other hut circles discovered since, contained evidence of a more advanced culture with pottery, more advanced stone tools, and jewellery in the form of drilled pieces of ostrich eggshell, beads of carnelian and other stones.

So far, little is known of the Middle and New Kingdom periods of Pharaonic Egypt. Temples of this period were often pillaged for stone to use in later Greek and Roman temples. This makes interpretation extremely difficult. For example, at Timithis, an ancient settlement in the oasis that is currently under excavation, archaeologists have found a Roman temple erected by Titus and Domitian – with the local Egyptian god Thoth appearing everywhere, as usual in the form of a baboon. However they also found numerous stone stelae from pre- Roman times, notably of Takelot III from around 750 BC and of Pedubastis of 810 BC. At the temple were also some inscriptions of Psamtek I, better known in his Greek form as Psametticos (664-610). All these were reused in the Roman temple but enable us to infer that there had been an earlier temple on the site.

The most active historical period of the oases was in Hellenistic times when the population increased with the establishment of three sizeable towns. These continued to flourish through the almost imperceptible change from Hellenistic pagan to Byzantine Christian culture. The remains of several large farmhouses show that the oasis was important as a food producing area and the resulting wealth is clear from the lifestyle. In the ancient towns of Kellis (now known as Smint) and Trimithis (now Amheida) there are large houses, built round a central courtyard on the plan of Roman villas, decorated with heroes and scenes from Classical mythology. From them have been recovered many Greek texts both papyri and ostraca, including literary works, business and legal documents, private letters and the like. A wall in one house was covered with writing as if a teacher had been using it as a blackboard.

Two particularly interesting documents found at Kellis are codices, dated between 360-380 AD with “pages” of thin sheets of acacia wood cut from a single block, drilled, and bound together with string. Not only are they amongst the earliest known examples of this type of book but one is a farm manager’s record of transactions over a period of four years and therefore of great interest to the Project with its principal aim the study of environmental change. The entries on eight pages list wheat, barley, figs, olives, honey and wine and several other crops together with payments of wages, and for transport. Some of these payments were made in cash – others by exchange of goods. The second book contained speeches by the Greek orator Isocrates, an indication of the sophistication of this community.