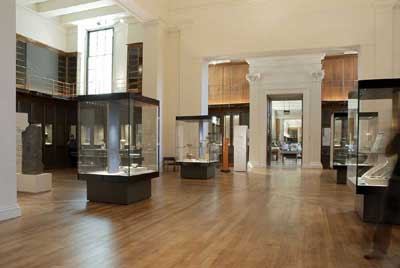 The British Museum’s latest gallery space, Room 2, is the one room you should see if time is pressing. It lies just off the Enlightenment Gallery: to find it, turn right as you enter, and go through the shop. It serves as a temporary display area for key items that would otherwise go into storage while their respective galleries are being refurbished. For the first time, visitors can get a snap-shot of a range of British Museum treasures from around the world.

Currently, the display includes material from Ancient Iran and Ancient Arabia, Prehistoric and Roman Britain, Iron Age Europe and Japan. This display will run until January 2007, until the reopening of the refurbished galleries, when it will be replaced by material from the next set of gallery improvements.

Iconic objects presently on display from Iran and Arabia include parts of the famous Oxus treasure, stunning votive material from Yemen and luxury Sasanian cut glass. The enigmatic Folkton drums and the unique Mold Gold Cape can be seen alongside two important finds by metal detectorists, the Ringlemere Gold Cup and the Milton Keynes Hoard. The Dunaverney fleshhook, the Battersea Shield, the Ribchester helmet and the Corbridge Lanx are some of the important treasures on display from the Museum’s Iron Age and Roman Britain.

Within each geographical section/time period, the objects are divided into simple themes including luxury silver and glass; writing and inscriptions; and emperors and deities. This creates links between the otherwise disparate sections and cleverly provides a common narrative. Handling sessions will also take place in the gallery, allowing visitors to touch the past. Eyeopener tours are also planned allowing broader themes to be brought out between the civilisations represented.

The fact that items from very different lands and periods come together in one place is a real boon and makes the room something of a perfect mini-museum.Thus, the same people who thrill over British archaeology find themselves in a room with Japanese items that they might otherwise ignore, and vice-versa. I was also impressed by the space itself – it is light, bright, uncluttered, and yes, a million miles from some of the older galleries.

Some of the items currently on display in Room 2:

This is an incense burner with an inscription in Sabaic, one of several related Semitic languages of South West Arabia (modern Yemen). It was written using an alphabet which changed little between its origins sometime in the 12th – 9th centuries BC and its disappearance in the 7th century AD.

Shabwa, from where the item comes, was the capital of Hadramawt in eastern Yemen. This was one of the rival kingdoms of South West Arabia, the others being Saba (the oldest and most powerful and said to be the dominion of the likely mythical Queen of Sheba), Himyar, Qataban and Ma’in. According to the written records, there was often warfare between the kingdoms. A source of conflict was the control of frankincense and myrrh: highly prized aromatics burnt on altars all over the ancient Near Eastern and Mediterranean world. These two resins only grow in eastern Yemen, southern Oman and Somaliland. Their production and trade were largely in the hands of the ancient South West Arabians, whose wealth was built in part on these commodities.

This burner shows a camel rider; by the end of the 1st millennium BC there appears to have been an increasing reliance on Bedouin camel riders. Later, horse riders also grew in importance. Both were key in the trade network and also for their strategic value in battle.

The incense burner also bears an inscription referring to ‘Adhlal, son of Wahab’il’, who had presumably dedicated the burner in a temple as an act of piety.

These objects were found by Canon William Greenwell in 1889 when he opened a round barrow on Folkton Wold.

They had been placed behind the head and hips of the body of a child in an oval grave close to the outer of two concentric ditches. Several other bodies shared the monument.

In England, the custom of burying individuals with ‘special’ grave goods had begun by about 3000 BC. This grave offering is exceptional – the drums are unique – and must indicate something about the status of the child.

The drums are made from local chalk and are elaborately carved, using a technique very like that of chip-carving used by woodworkers. No other objects like them survive, but perhaps equivalent items were made of wood and have not survived. We do not know how they were used. The decoration is organized in panels; stylized human faces look out from two of the drums.

The significance of the designs is unknown to us, though they are very similar to those found on pottery of the Later Neolithic Grooved Ware style. The geometric patterns recall Beaker pottery and Early Bronze Age sheet goldwork decorated in the same vein.

In 1833, workmen quarrying for stone in an ancient burial mound found this unique gold cape. The site lay in a mysteriously named field: Bryn yr Ellyllon (the Fairies’ or Goblins’ Hill). At the centre of the burial mound was a stonelined grave. It contained the crushed gold cape around the fragmentary remains of a skeleton. Strips of bronze and quantities of amber beads were also recovered, but only one of the beads ever reached the British Museum.

The Mold gold cape would have severely restricted upper arm movement and was clearly not intended for practical use, instead it would have served ceremonial roles, and may have denoted an important religious authority.

Indeed, it is one of the finest examples of prehistoric sheet-gold working and is quite unique in form and design. It was laboriously beaten out of a single ingot of gold, then embellished with intense decoration of ribs and bosses to mimic multiple strings of beads amid folds of cloth. Perforations along the upper and lower edges indicate that it was once attached to a lining, perhaps of leather, which has decayed. The bronze strips may have served to strengthen the adornment further.

The fragile cape broke up during recovery and the pieces were dispersed among various people. Although the British Museum acquired the greater proportion in 1836, small fragments have come to light intermittently.

Pictures: British Museum copyright With thanks to Hannah Boulton and St John Simpson.