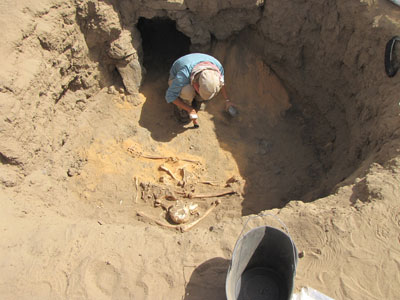 Michaela Binder discovers what the dead can tell us about living.

The cemeteries at Amara West provide an interesting insight into cultural developments in Egyptian-controlledNubiaduring theNew Kingdomperiod and its aftermath, and, to date, we have uncovered 64 tomb structures, ranging from small single burials to large chamber tombs used for the interment of several individuals.

The people were buried in two distinctive areas: to the north-west and to the north-east of the town. The administrative elite serving at Amara West during the colonial period chose to be buried entirely according to Egyptian rituals in rock-cut chamber tombs with small pyramid superstructures entirely of mudbrick. The bodies were placed in painted wooden coffins and may have been mummified – though because of soil conditions, such remains have not been preserved.

The dead were adorned with scarabs, jewellery, and small amulets of Egyptian gods, though, unfortunately, tomb robbers had disturbed most burials. This preference for Egyptian customs is also seen in more humble, non-elite graves.

Yet, other graves attest that parts of the population continued to follow indigenous Nubian burial traditions: small burial mounds and placement of bodies in a crouched or flexed position.

Clues to health
The human remains from Amara West, now totalling about 170 individuals, are being stored at theBritishMuseuminLondonwhere they are available for further study. The main focus of our current research is the living conditions of the ancient inhabitants at Amara West, backed up by ongoing archaeological and palaeoenvironmental research within the town.

We know that certain types of chronic diseases – such as respiratory infections, tuberculosis, leprosy or syphilis, severe malnutrition, dental disease or joint diseases – can leave distinctive imprints on the bones. Physical injury also leaves traces: a bone fracture, even if healed, may stay visible because the bone formed during healing usually has a different appearance compared with normal bone.

Body height is another important marker for living conditions: though determined genetically, nutrition and disease during growth can significantly influence whether an individual is able to fulfil their genetic potential. Studying all these markers together gives us a clearer picture of the general living conditions enjoyed by people in the past. Therefore, although analysis of evidence from Amara West is still at an early stage, already we are finding intriguing clues to what life was like here in this Nubian town.

The demographic profile shows that about half of all adults died at the relatively young age of 21 to 35 years, while others apparently lived into their 40s and 50s – not a bad age for ancient, pre-antibiotic populations, and one that would argue for reasonably good living conditions.

Sub-adult mortality is slightly lower than expected, though this may simply be a reflection of funerary traditions: we know from other Egyptian cemeteries that neonates and young infants were treated differently, often buried either within the settlement or in separate areas of the cemetery.

Evidence that life was not so easy, however, is revealed by the other physical trait mentioned above: height. The people of Amara West were on the small side. On average, men reached about 5ft 5in/167.1cm, and women about 5ft ½in/154.4cm. Such low values in both sexes suggest an unfavourable living environment, possibly due to disease and dietary deficiencies which inhibited growth during childhood.

Another interesting finding is the high frequency of healed fractures. Nearly half the adult population showed signs of at least one fractured bone, most commonly occurring in the ribcage. More unusual is the relatively frequent occurrence of spinal and pelvic fractures. Such injuries are mainly associated with falls or crashes, and may attest to the hardships of agricultural life.

Less common were signs of infectious diseases, even though there are several individuals displaying evidence of some form of respiratory complaint. However, a third of the population analysed so far showed pathological changes on the inner side of the skull, expressed through deposition of new bone formation. This maybe the result of an infectious disease, but it can also occur through dietary deficiencies such as scurvy, which is caused by lack of vitamin C.

Clues to eating
Human remains represent an important source of information about past diet. One method used is the study of carbon- and nitrogen-stable isotopes present in bone collagen. The ratio of specific isotopes of carbon gives an indication of different plant types consumed by an individual as well as the ratio of terrestrial and marine food resources eaten. Stable nitrogen isotopes, on the other hand, provide information about the proportion of meat in the diet. We, therefore, were keen to apply such methods at Amara West. However, bone collagen only survives if soil conditions are favourable and, unfortunately, at Amara West this was not the case:
the bone collagen had completely deteriorated.

Other skeletal sources of information about dietary habits in past human populations include teeth and jaws. Interestingly, people at Amara West seemed to have lost a high percentage of their teeth very early in life. Abscesses in the jaw were equally common. Those teeth that were present, were usually highly worn, often down to the tooth root. Reasons for this high degree of wear may be found in a diet in which the bread contains a lot of abrasive material, including sand and grit.

Cemeteries allow us to study living conditions of past human groups from a different angle, through people’s most direct remains: their skeletons. Bones work as a unique database storing all kinds of information about who we were, what we ate, how we worked, where we came from, and what diseases plagued us during lifetime. Recent technological advances have extended the range of tools available to bioarchaeologists, the scientists studying human remains from archaeological sites, by methods such as DNA, stable isotope analysis, or high-resolution imaging techniques. These all provide us increasingly refined insight into past human life.

Bioarchaeological research at Amara West is still in its early stages as both analysis and excavation are ongoing. Together with archaeological and environmental evidence from the town and surrounding habitats, it will be possible to shed light on how well humans adapted to an increasingly challenging natural environment, challenges that ultimately led to abandonment of the site.