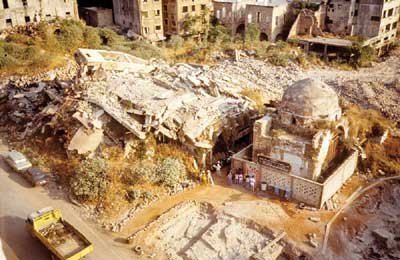 Some journeys can change your life forever. Twelve years ago I flew into Beirut to meet with archaeologists from UNESCO and the Lebanese Directorate General of Antiquities, writes Dr Dominic Perring, of the Institute of Archaeology, University College London. The purpose of the meetings was to see if I could help in the excavations then being planned. A massive reconstruction effort was about to commence, and the architects’ plans envisaged a network of underground services, car parks and subways throughout the historic core of the city. I had never been to Beirut before, and was not at all sure that I had anything useful to offer, but the challenge was irresistible.

In an early walk-over survey, as we decided where to place our archaeological trenches, we were surprised to find a layer of red sandy earth containing Bronze Age pottery. This made no sense. Bore-hole results told us that we were standing above 5m of urban stratigraphy, and we had not yet cleared away the foundations of the recently demolished modern buildings. The puzzle was soon resolved as the decayed fragments of sandbags came to light. The uppermost stratigraphic horizon was composed of material imported during the war: an extreme example of the re-working that makes urban archaeology so complex. Our later excavations were to establish that the site lay outside the area of the Bronze Age and early Iron Age settlement. Bronze Age Beirut was a small tell, little more than 250 m long and up to 100m wide, located on the east side of a bay where the harbour was found. The Souks site occupied a raised promontory to the west of the harbour which, as our later excavations were to establish, had been used as a cemetery prior to a programme of planned urban expansion in the 6th-5th century BC.

Our brief investigation of a small evaluation trench soon turned into a major rescue excavation covering an area of about 3.3ha. Work took place continuously over a period of two years, at the end of which 157 professional archaeologists had been employed on the project at one stage or another. Although it has now been ten years since we stopped digging, a small team is still working on the finds and records, and many lives have now been changed by the project. Kevin Butcher who arrived to help us identify the coins is still in Beirut: now a lecturer at the American University of Beirut. His monumental monograph on the 7000 coins found in the Souks’ excavations, the first volume of our final reports to be complete, is now published as a supplement to the Journal Berytus. Paul Reynolds is also in Beirut, finishing work on the illustrations to his magisterial survey of the Hellenistic and Roman pottery. Other specialists, too many to name and based in universities as far apart as Cork and Chicago, are also preparing reports on the other classes of finds. Even now new discoveries are being made as we work through the project archive.

Among the work now nearing completion, some of the most interesting results concern the architectural sequences. Here the work of Reuben Thorpe deserves particular attention. As already mentioned, the first planned development of the Souks area can be dated to the Persian-Achaeminid period. A regular grid of streets was laid out, with long and narrow blocks of houses. This period was accompanied by an increase in the range of imported fine-wares, with Attic black-glazed pottery occurring alongside locally produced coarse-wares. Further phases of urban expansion took place in the period after the Macedonian conquest, and again – and on a larger scale – in the period around 200 BC, perhaps following the Seleucid conquest of the city. Periods of recession can also be identified, such as the period between 150 and 50 BC when little building activity took place.

One of the busiest periods of construction dates to the early Roman period. This was in part due to the settlement at Beirut of a veteran colony in 15/14 BC. A new style of compact courtyard house was introduced at this time, probably to accommodate the colonists. The best evidence for this comes from the insula of the House of the Fountains, where small ashlarwalled houses were built on open land behind existing Hellenistic buildings. These houses were much altered in later phases of reconstruction, and their interpretation depends on some conjecture. It is possible, however, to identify three small houses, each consisting of two ranges of rooms flanking a paved or cement floored courtyard where a cistern was located. One of these houses did not have direct access to the street, but was approached by means of a narrow cul-de-sac. Similar alleyways were identified elsewhere on the Souks site, and made it possible to put houses in otherwise inaccessible back-plots. These arrangements reflect on the pressures of space that applied in Beirut at this time.

The houses built after the Roman settlement were soon altered. Colonnades, which had not been part of the original design, were inserted into the courtyards of two of the houses in the insula of the House of the Fountains, and principal reception rooms were enlarged. One of the houses was remodeled in this way in the early first century AD. In another a peristyle garden with a fountain had replaced the paved courtyard before the end of the century. These conversions were difficult to achieve within such small houses, and suggest that the peristyle had acquired a previously unanticipated importance. This might testify to the increased prosperity and social mobility of the heirs of the first colonists. Perhaps later generations were better able to understand and enjoy the social rituals served by the peristyle courtyard, a feature which encouraged educated discourse at supper parties.

Little building activity took place on the Souks site in the period c.AD 150-300, and some areas may have been left derelict. By the middle of the fourth century, however, the city was once again busy with construction work. Earlier structures were remodelled to form large lavishly decorated aristocratic houses, set out around courtyards and gardens. This architecture was characterised by a return to earlier styles of roofing and the widespread use of mosaic and opus sectile pavements. These changes took place at a time when other aspects of cultural display were also changing, as in the shift from Latin to Greek.

The House of the Fountains was the best preserved building of this period. It was formed c.AD 350 by combining several earlier units into a single house. The reception facilities were extensively altered c.AD 410, and completely redecorated in the mid fifth century, with further minor alterations before its destruction in the earthquake of AD 551. At the time of the earthquake the house contained a series of interconnected peristyle courtyards, each decorated with opus sectile pavements and fountains. In one of these rooms a marble screen had been decorated with the Christian Chi-Rho monogram. The building also contained two large reception rooms, probably dining rooms, that had originally been apse-ended and decorated with mosaic floors. A hanging bronze polycandelon, supporting suspended glass lamps, was found in the destruction debris of one of these rooms.

The portico along the southern side of the site was also restored and decorated c.350. A new mosaic pavement laid along the length of the covered portico included a series of Greek letters, starting at alpha. Each letter marked the entrance to a shop and gave it an address. Shop alpha, at the corner of the row, contained a series of cement-lined vats and had a paved yard to the rear. The design and layout of this building suggests that it had been a fullery, rather similar to the better preserved examples known from many Pompeiian houses. Alterations to other shops, during the mid 5th and early 6th centuries, typically involved the insertion of ovens, sunken storage vessels and mortar floors.

In architectural terms the transition from Roman to Byzantine in the early 4th century was every bit as marked as the earlier 1st century transition from Hellenistic to Roman. These late antique houses were characterised by an even more pronounced emphasis on reception space, and a more pronounced divide between the houses of the rich few, and the smaller shops and houses of the many. Lavish expenditure, as in the addition of marble pavements and wall decorations, was still evident into the early sixth century.

The mosaic floors within the portico had been sealed by layers of charcoal containing fire scorched ceramics and pots distorted by heat. Similar deposits were found in many other buildings. In some cases stone thresholds had also been cracked, and destruction debris and robbing marked the disuse of the 6th century buildings. These findings offer some archaeological confirmation of the historical sources, which tell how fires raged for weeks among the ruins of the city devastated by the earthquake and tidal wave of AD 551.

Most areas studied in the Souks’ excavations were left in ruin after the earthquake, but at least one of the smaller alleyways was cleared of rubble. Pottery post-dating the Arab conquest was found in a drain, and some structures here may have been restored. One of the Byzantine buildings alongside this alleyway survived sufficiently intact for a group of Abbasid amphorae to be placed in the corner of one room. This area was later re-developed, with remains of structures of Abbasid, Fatimid and later date recorded here. These structures were poorly preserved, but in some instances encroached onto and disrupted the course of alleyways first laid out in the late Iron Age and that had been restored to use after the earthquake. The public baths opposite the Souks, the main fabric of which dated back to the Augustan period, had also been restored and remained in use into the Islamic period. Remains of medieval date have been encountered on various other sites, although the archaeology of this period is more difficult to study owing to more recent disturbance of the higher stratigraphy. It is clear that the Islamic city was much smaller than its Byzantine predecessor, but evidence of glass working and pottery manufacture witnesses the continued economic vitality of the urban core. Remains of the Crusader period castle, and urban defences, have also been explored – whilst work in the area of the Ottoman port is still in progress.

Twelve years since first arriving in Beirut I am still caught up in the archaeology of this fascinating city. Too much was excavated, too fast, and with too few resources for proper study. But enough was achieved for us now to be able to write a proper archaeological biography of this great city, and to ensure that, as the modern city is rebuilt, so also we can rebuild something of its past.