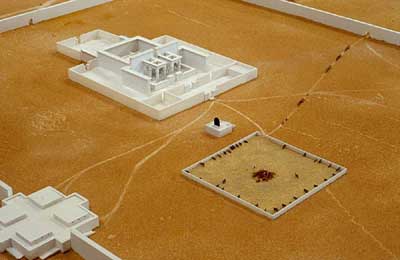 The best surviving example of an ancient Egyptian city is Amarna. This was a very short-lived city, laid out by the ‘heretic’ Pharaoh, Akhenaten, who did everything differently. He renounced the multiplicity of Egyptian gods in favour of a single god, Aten, whom he identified with the sun. But above all he abandoned the ancient city of Thebes (Luxor) and set up a new city at Amarna, 200 miles to the north, halfway between Thebes and the northern capital of Memphis, just outside modern Cairo. The city was laid out on a grand scale; but there was one big disadvantage: on his death, the former elite could not wait to bring the royal power back to the old centres of power, and after only 20 years of existence, Amarna was abandoned.

Archaeologically, this is a great advantage: it means that we are dealing with a one-period site. Furthermore, the site that he chose was an unpromising location and consequently no one has since wanted to build a city there, and thus today it is a virgin site, unencumbered by modern settlement.

Barry Kemp, Reader in Egyptology at Cambridge, has been digging at Amarna since 1977. His first project was to map the whole site and to put all the previous excavations on a single plan. It was an immense undertaking, particularly in the days of theodolites and surveyor’s chains, but it roused his interest in how the city ‘worked’ and how the various parts fitted together. On the ground, Amarna tends to be rather disappointing. ‘If you go there hoping to walk down an Egyptian street, you’ll be let down. The landscape is very much that of an excavator’s spoilheap. You can see walls appearing here and there – but the excavated areas have not fared all that well. They were cleared of their sand and rubble, in huge areas, and then just left: any streets and open spaces were often used for places to heap the spoil.

So when you go, it has an undulating landscape, mainly of spoil-heaps, and the houses are down in the depressions. But it still looks beautiful from the air. We have a low-level helium balloon with a camera attached to take lovely pictures of the buildings. But when you visit it’s quite hard to get the sense of a real city. You only get that sense by looking at plans or a model’. Thus when in 1999, a grand exhibition of the Art of Amarna was prepared at Boston University, Barry Kemp suggested they work with Michael Mallinson, an architect, who came up with the idea of making a model. They constructed the model in an architect’s model factory in Clapham. ‘During that summer I went down on a nearly daily basis to consult Michael and the model makers. We had to work within a tight budget which prevented changes of mind. There were areas that had been destroyed and we had to fill them in a plausible way. One major problem was that it is normal for architectural models to present the architect’s design in the best light and thus to show it clean and new. The mud brick, of which much of Amarna was built, wears and erodes easily. We therefore decided to distress the model a little, by dirtying the surfaces of the walls and the roofs of the houses, as well as the surrounding ground, but we did not have time to distress it as much as we would like. It still looks a little too neat and clean.’ The model was a great success. It went from Boston to Chicago and Los Angeles and finally to Leiden. It was then shipped to Egypt where it is currently disassembled in a storehouse across the river from Amarna, ready for when a new visitor centre is built on the site.

What does the city look like when reconstructed?
The model of the city can be divided into three main areas: there is the Central City to the left of the plan that contains the formal palaces and the two great temples, while behind it lay the jumbled mass of the civil service area, and beyond that (6) the police station with parking space for the chariots in which they zoomed round the city. Then, stretched along the Nile itself, were the great areas of warehouses where produce could be stored for redistribution by the Pharaoh. Behind that, green on the plan, is the southern suburb where the people and indeed the higher officials actually lived.

However, the model is not of the entire city; the palaces where the Pharaoh and his queen (probably) lived lay some distance to the north (the North palace and North Riverside Palace) and were linked to the Central Palace by the Royal Road. Carved scenes in the tombs show the Pharaoh making his royal progress in a procession along the Royal Road, with his officials running beside him. Between the two palaces was another suburb known as the North Suburb.

And then there were the tombs. A mile or so inland were some low cliffs into which officials were encouraged to cut their tombs. None of these were actually finished but as soon as the front sections were hewn out, the decorators moved in and the walls were thus covered with engravings. Indeed these engravings are among the most remarkable monuments of Egyptian art, for they are done in a far more lively style than that of the traditional paintings, giving many details of everyday life. Indeed it is these details that provide a lot of the evidence for the reconstruction that is shown in the model: much of this detailed evidence is given on the website. Then across the river lay the agricultural lands from which the city was fed. When the city was first laid out, Akhenaten set up four boundary stones to mark the limits of the city, and these reveal that nearly three-quarters of the total area of the city consisted of the agricultural land on the west bank. The city on the east bank was only a small part of the total area.

The city was not in use for long. Akhenaten came to power in 1358 and it was only in the fifth year of his reign that he decided to abandon Luxor and to found a new city at Amarna. He only lived on for a further 13 years, and his death in 1340 was followed by a somewhat chaotic period of a very minor Pharaoh called Tutankhamen. However, it appears that almost immediately, the court took up residence again in Memphis and Thebes. Amarna was not totally abandoned straightaway, indeed some parts continued to be occupied for a further ten or even twenty years, but the total time from foundation to abandonment was probably no longer than 30 years.
Akhenaten remains a controversial and exciting figure. On his death he suffered damnatio memoriae and his name was removed from the official records, so that the early scholars knew nothing of his existence. Gradually, the tombs were discovered with their remarkably fresh art, then the city itself began to be uncovered and the whole story of Akhenaten began to emerge. Inevitably everyone has their own views of Akhenaten and his experiment: many have been attracted to see him as a great religious reformer, introducing monotheism and becoming a forerunner of Christianity. Barry Kemp is a little more sceptical. Many of Akhenaten’s ideas, such as the predominance of the sky-god had already become commonplace in Egyptian religion. However, in the scenes carved on the tomb walls, the Pharaoh is omnipresent and it may be that the reason why Akhenaten and his religion were forgotten so quickly and so comprehensively is that the nobles and the people wanted to pay a little bit more attention to the old traditions and the priests and the bureaucrats – and a little less attention to what appeared to be the rule of just one man.