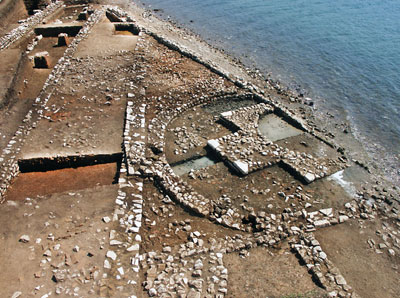 At the end of the year I always reflect upon its most memorable moments, the images returning in sequence along with some deep and defining pleasure. Many such images belong to the album of this past year, but from my archaeological expeditions, one stands out: Butrint.

Having spent the past 15 years working at Butrint we have long lived in the shadow of Titus Pomponius Atticus, the 1st century BC millionaire who had an estate close to the ancient town. The novelist Robert Harris, in Lustrum, his latest thriller set in Republican Rome, casts Atticus as a benign fellow, happier to read in the Epirote sun than play menacing politics in Cicero’s company in Rome. From Cicero’s voluminous letters to Atticus – once a house-guest at this great estate – we learn of his immense library as well as the glories of his grounds. Here are two examples that conjure up the place:

‘Let me tell you that Antium is the Buthrotum of Rome and just what your Buthrotum is to Corcyra: nothing could be quieter or fresher or prettier’ Letter from Cicero to Atticus (4.8), April/May 56 BC

‘You were wiser than I in getting a house in Buthrotum. Yet I can assure you that there is not much to choose between that town and this community of Antium’ Letter from Cicero to Atticus (2.6), April 59 BC

Late in life Atticus did stand up and fight the Roman courtiers, boldly challenging Julius Caesar about planting veterans at Butrint (and in effect destroying this Epirote idyll). More to the point, his family effectively ran Butrint in late Republican and early Imperial times. Indeed, his son-in-law, Agrippa, was the architect of Octavian’s apocalyptic victory over Mark Anthony and Cleopatra at Actium (now, Nikopolis), a hundred miles down the coast from Butrint. Such connections, we surmise, led to Virgil, the court poet, introducing Butrint into his epic about Aeneas: by so doing he connected Butrint to the founding of Rome and, naturally, to its renaissance under his patron, the first Emperor Augustus (previously Octavian).

Atticus for a time, one might say, was Butrint. It is hard to imagine now. Since Ottoman times the Albanian hinterland of Butrint has been a twilight zone, trapped on a forgotten frontier. In such circumstances, trying to imagine a villa of stylish proportions in among the rusting and shabby remains of communist collective farms stretches even an archaeologist’s fertile imagination. I should add, too, that the Greeks have long since located the villa south of the border, in the lush lands of the modern Thyamis river that lie north of the tawdry ferry port of Igoumenitsa. I am not persuaded by this Greek interpretation, though Atticus almost certainly owned other properties in the region.

At this point I must admit to a particular prejudice that consciously or unconsciously makes me want to believe in this Xanadu-like villa. Our project at Butrint was created by two lords, Rothschild and Sainsbury, whose fascination for the nearby archaeological site stemmed from vacationing at Lord Rothschild’s glorious villa on nearby Corfu. In some ways, you might say, Jacob Rothschild is my Atticus, and John Sainsbury is therefore Cicero.

I had never met a lord when I encountered these two gentlemen for the first time in 1993. I was star struck, almost as though I had touched history. But nothing prepared me for Kanonas, Lord Rothschild’s villa. Arriving from Italy, I was whisked by speed boat on a starry humid July night across Corfu bay and up the Straits of Corfu. We landed on a jetty and in the darkness followed a meandering path through olive groves to a low villa bedecked with flowers. Here, ranged around the grand living room – my eyes dwelling momentarily on the tapestry of paintings and water-colours – Lord Rothschild held court for his dinner guests. Here, in defiance of the clinging July heat and the menacing mosquitoes, Jacob, his guests and I, speculated upon what treasures and, indeed, what adventures might be in store when we crossed the two miles to Butrint. Jacob, with his library, his profound and romantic love of antiquity and history, and, of course, unimaginable wealth is naturally Atticus re-born. Dining in the midst of these glorious grounds, notwithstanding the vicious and complicated background of communist Albania, it is not difficult after a grand meal with lively dinner-guests to imagine a Roman peer thriving in this exalted corner of the Mediterranean.