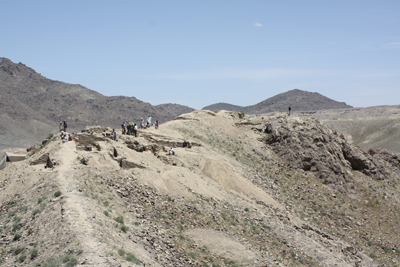 Afghanistan has one of the richest cultural heritages in the world, and at Mes Aynak archaeologists are working at the site of an ancient Buddhist monastery. Yet, sadly, there are only a few other excavations being carried out in a country where thousands of archaeological, cultural, and historical sites lie unguarded and under threat.

Archaeology in Afghanistan has had a long and complex history: nearly 90 years have passed since the Afghan government under King Amanullah Khan (1919-1928) signed a deal with France in 1922, granting the European country exclusive excavation rights for 30 years, with any finds to be divided between them. In 1952, fresh negotiations involved more international missions, and for the next three decades archaeology flourished across the land: teams from Britain, India, Italy, Japan, the United States, and the Soviet Union came to Afghanistan, nurturing positive international cooperation. From these projects, extraordinary collections were uncovered – notably from the Kushan site of Hadda, the Greek site of Ai Khanoum, the Bronze Age site of Mondigak, and the Buddhist site of Bamiyan. With this growing momentum, Afghanistan’s National Institute of Archaeology was founded in Kabul in 1966. Then, in 1978-1979, an Afghan–Soviet archaeology team uncovered the renowned Bactrian gold hoard of Tillya Tepe (‘golden hill’) in northern Afghanistan.

Conditions dramatically shifted with the Soviet invasion in 1979. During the Soviet occupation (1979-1989) and the Mujahideen civil war (1992-1994), archaeological excavations ceased. Though looting had always been a concern, sites around the country were nearly impossible to secure and were ransacked by impoverished villagers, whose clandestine operations were often overseen by warlords. Under the Taliban rule (1996-2001), looting was banned by official decree, but further excavations were not allowed to continue. After the Taliban was overthrown in 2001, archaeological work cautiously resumed and continued to expand over the next decade.

Now, after 30 years of warfare, archaeologists in Afghanistan face many new challenges. Chief among these is the uncertain security situation, with political turmoil continuing to plague the country. Security is essential to the excavation and preservation of archaeological sites across this difficult terrain. Indeed, this is the main reason female Afghan archaeologists do not work on sites; they can, however, be found safely employed at the National Museum. Within the archaeological community, Afghans and internationals alike are divided on whether now is the appropriate time to begin further projects, and countless archaeological sites remain unearthed. Yet there are several collaborative archaeological digs under way, including near the northern town of Balkh, in the central Bamiyan valley, and in the south-eastern village of Mes Aynak.