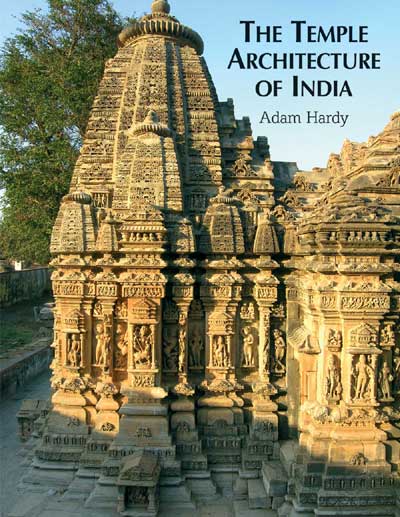 Unlike Mughal art and architecture, Hindu sculpture and architecture were poorly received by scholars in colonial times, with notable exceptions such as E. B. Havell. They still occupy something of an art-historical ghetto. Writers sympathetic to them have suffered from the life-denying metaphysical preoccupations of the pioneering art historian Ananda Coomaraswamy (1877-1947) and his followers, such as Stella Kramrisch (The Hindu Temple, 1946). For all Coomaraswamy’s formidable scholarship, in which his footnotes sometimes filled almost the entire page, he idealised Hindu art as exclusively spiritual—partly, no doubt, as a riposte to the western charge that Hinduism was a barbaric religion with an art tradition unworthy of comparison with European art.

It is, therefore, refreshing to find that Adam Hardy, in his new book The Temple Architecture of India, has broken free of Coomaraswamy’s influence (if not so much of Kramrisch’s). Hardy mentions Coomaraswamy only twice, in both cases critically, in order to disagree with his notion that the traditional Indian artist or architect was ‘a selfless channel through which transcendent truths could be given form’. Nor does Coomaraswamy appear in his bibliography.

Hardy is extremely well qualified to write this book. Not only has he been exploring Indian temples for 25 years, and publishing prolifically on the subject—latterly as the head of a research group at the Welsh School of Architecture in Cardiff—he has also designed several Hindu temples in England. Moreover, as editor of the journal South Asian Studies, he is fully aware of work by other scholars.

In his final paragraph, he writes that the book ‘will have fulfilled its aim if it has opened a little window into another architectural universe, and begun to sketch out its overall shapes and to fill in its details… This might not be the noblest end, but it will have made a good start.’ The book does indeed achieve this aim, through its articulate, well-grounded text but even more through its copious deployment in a large format of excellent colour photographs and detailed drawings, with numerous plans and elevations of the temples under discussion. It is probably worth buying for its illustrations alone. I was seriously disappointed, though, to find no photograph of the magnificent Surya (Sun) Temple at Konarak, in Orissa, which deserves extensive illustration.

Although the scope is pan-Indian, the time frame focuses on the core period of temple construction from the 6th to the 13th centuries AD. The book does cover the early Buddhist period, such as the great stupa at Sanchi built in the 1st century BC (superbly illustrated), and the cave temples at Ajanta; however, it does not continue beyond the Muslim invasions of north India as far as the southern Hindu Vijayanagar empire of the 15th century, except for a brief coda.

The bulk of the book is taken up with very thorough description and analysis of particular temple styles, such as Shekhari and Bhumija, and with aspects of temple building, such as the role of the canonical texts (the vastu shastras) and the architects and craftsmen, so far as these can be determined. But periodically the author breaks off to comment on subjects of more general interest.

He writes sensibly, for instance, about the widespread eroticism of Indian temple sculpture (famously at Khajuraho and also at Konarak), which is still a cause for debate and was a source of scandalised comment in Coomaraswamy’s time—both from westerners and from Hindu reformers like Swami Vivekananda. ‘This has a very long history in India. In earlier periods, the loving couples in the walls of sacred buildings are simply happy; from around the 9th century, they proliferate and, increasingly, copulate.’ Hardy believes that there are many reasonable explanations, not just one (such as Tantricism), and then suggests several: ‘Erotic images could be metaphors for the bliss of union with the divine; they could represent the world of the senses which flows out of us, and which spiritual aspiration must transcend. They could be comic. They could make puns: at Khajuraho the well-known images of conjuncture appear at the junction of mula-prasada [main shrine] and mandapa [porch]. They could picture the pleasures of heaven, or simply rejoice in life.’

He can also be pleasingly ironic. On the pitfalls of being a post-colonial academic, he comments: ‘The temptation is to give up talking about buildings and join the critics, but some of us need to provide them with something to ‘problematise’. And on designing Hindu temples for the newly prosperous Indian diaspora in the West, he remarks: ‘When the concept of the south Indian temple enclosure is roofed over for a cold climate, it is given a suspended ceiling throughout, with no view from inside the towers, which poke up like pimples on the roof of a supermarket.’

Overall, The Temple Architecture of India is a book for the specialist and for the reference section of libraries, not for the general reader interested in India. I shall shelve my copy with Penguin’s two fairly recent guides to Indian art and architecture, one by J. C. Harle, the other by George Michell, and with Christopher Tadgell’s The History of Architecture in India.

Review by Andrew Robinson, author of several books on Indian culture, and a visiting fellow of Wolfson College, Cambridge.