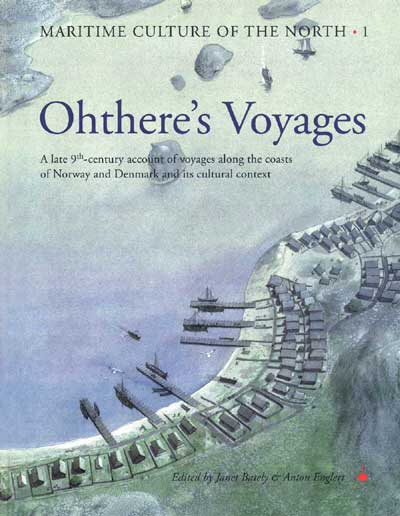 Ohthere was a Norwegian seafarer, who visited the court of Saxon King Alfred during the 850s AD. He was an honoured guest, who regaled the court with stories of his voyages along the coast of Norway, as far south as Hedeby at the base of the modern-day Danish peninsula, and deep into the Baltic as far as the mouth of the Vistula. Ohthere spoke of whale-rich waters, where he and five others had killed 60 of them in two days. He owned a herd of 600 reindeer and brought lavish gifts of walrus ivory for his host.

The wealthy, well-connected sea captain was not alone. His ship was one of many that coasted along well-trodden sea routes from Norway to the Baltic, but his voyages, and those of another sailor, Wulfstan, have come down to us as an interpolation to a translation of the Latin writings of Paulius Orosius, a 5th-century Iberian priest, whose Historiarum adversum Paganos Libri Septem was a major source of geographical information in the Middle Ages. Alfred himself may have ordered the translation of Orosius, as part of his efforts at educational reform. Ohthere’s Voyages is the culmination of research on these two voyagers that dates back to the 16th century, and brings together multidisciplinary research on the great seafarers presented at a seminar at the Roskilde Viking Ship Museum in 2003.

After a brief foreword, the book starts with a facsimile of the original text, followed by a masterly essay by Janet Bately on the Old English Orosius and an informed discussion of the challenges of her translation of the voyages narrative that follows. She points out that the reason the accounts have survived is not only because of their tales of exotic lands, but also because of the vital information they contain on ancient sea routes, distances, and navigational directions, most of which would normally be passed orally from one skipper to another and be inaccessible to others. Comprehensive notes accompany the translation, which must, at this point, be the authoritative rendering of the voyages.

From the narrative itself, we move on to the geography of the North, to toponymy and political organization in Ohthere’s home waters, where medieval geographical knowledge was defined by early classical sources. Inger Storli contributes a fascinating account of the long and narrow coastline of Ohthere’s world from archaeological and historical sources. She considers him a contemporary of Harold Finehair, the first man to unify much of Norway. Ohthere was not alone in his trading; he was one in a chain of traders who linked the north with southern markets, where luxuries like tableware for feasts were exchanged for walrus ivory, and perhaps stockfish. The excavations at Borg, a chieftain’s farm on Lofoten and the subject of a separate chapter, amplify this valuable account.

Arne Emil Christiansen carefully reconstructs Ohthere’s ship from a skein of indirect clues. He concludes that she was a seaworthy ship, perhaps capable of carrying about 5 to 6 tons, built along traditional northern lines. In a fascinating essay, Anton Eglert examines Ohthere’s voyages from a seaman’s angle, starting with a clever reconstruction of the kinds of conversation that would have elicited information on sailing conditions at the English court. There is information on sailing seasons and on the lengths of coastal passages, reconstructed from a variety of sources. We learn that the wind direction was the dominant factor in Ohthere’s voyaging, for head winds could delay him at anchor for weeks. With a favourable north wind, one could sail the length of the Norwegian coast in a month, stopping each short summer night. Alfred learned of three sailing routes extending from the Kola Peninsula around the North Cape along the Atlantic coast of Norway, then through the Danish archipelago to Hedeby, a major trading centre. Three chapters then describe the destinations themselves, culminating in a useful summary of the excavations and surveys, which reveal Hedeby in Ohthere’s time. There were rows of houses and piers, dated by tree-rings to the ninth century. So far the investigators have studied 2000 sq. metres of the harbour: there is much more to uncover. Hedeby itself was a major trading centre in a constantly shifting network of emporia well described by Stéphane Lebecq in an essay on trade and exchange in Ohthere’s time. As Carsten Müller-Boysen points out, Ohthere flourished in a highly flexible northern trading world that existed long before the Norse sailed to Iceland and beyond.

Ohthere’s Voyages is a superb example of well-integrated multidisciplinary scholarship, published to a standard worthy of a great northern seafarer. This is, quite simply, the definitive account of Ohthere and Wulfstan for at least a generation, written in an accessible style that will appeal to a wide audience, not merely specialists. Just the esoteric information in these pages is worth the price of admission. Did you know that the replica of the Gokstad ship averaged nearly 80 miles a day on her 28-day voyage from Bergen to Newfoundland in 1893? This is a book not only to read, but also to browse at leisure—a truly wonderful piece of multidisciplinary research written by thoroughly literate experts, a sorry rarity in this day and age, especially among archaeologists.

I know I will read this book again and again, just to accompany Ohthere vicariously on his voyages through a long vanished northern world.

Review by Brian Fagan, author of Fish on Friday and The Great Warming