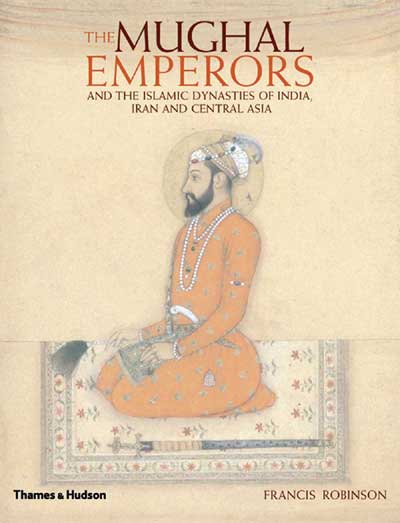 Ever since the 17th century, Mughal emperors have had a stronger hold on the world’s imagination than any other eastern rulers – hence our modern word for a powerful, wealthy and probably dynastic person, ‘mogul’. Anyone who has seen the Taj Mahal or the Red Fort – not to speak of the tomb of Itimad-ud-Daula in Agra or the Bara Imambara in Lucknow – will have felt the Mughal pull. But while there have been many books on this flamboyant empire that ruled India between the accession of Babur in 1526 and the abdication of Bahadur Shah in 1858, most of these books choose not to put the Mughals into their full historical context. Consequently few people have a clear picture of the Mughal relationship with the ancestral Mongol empire of Genghis Khan (who died in 1227) and its major successor dynasties of Iran and Central Asia: the Il Khans, the Timurids, the Safavids, the Qajars and the Delhi Sultans, dynasties which include rulers such as Timur (Tamberlane), Ulugh Beg, Shah Abbas I, Alauddin Khalji and Muhammed bin Tughluq, ruling from extraordinary cities like Samarqand, Isfahan and Delhi.

This contextualisation is what Francis Robinson, professor of the history of South Asia at the University of London, provides in his new book, through brief, chronologically arranged biographies of each ruler in these dynasties and a somewhat fuller treatment of the Great Mughals, attractively designed in the tradition of the established Thames & Hudson series of royal chronicles of ancient Egypt, Rome, China, Mexico and other dynastic societies.

The canvas is tumultuous and bloodstained, and as complex as a series of narrative Mughal miniature paintings like the Akbarnama, bursting with unfamiliar names, places and dates, made palatable by the use of copious illustrations and plentiful (not to mention essential) family trees, a fact box for each ruler and maps. Reading straight through from beginning to end is not recommended but, as an excellently illustrated reference source designed for dipping, the book performs a very useful function, although one wishes that more information had been given in the captions about the dates of the illustrations.

Robinson is aware of the increased importance of his subject since the advent of international Islamist terrorism and the wars in Iraq. His preface makes some valid points about this, stressing three themes in the lives of the dynasties he details, ‘which might overturn some common preconceptions about Islam, as actually lived’.

First, ‘Islam, and the range of ideas it offers, were consistently made subordinate to the requirements of power.’ Thus the infidel Il Khan rulers who were direct descendants of the unreligious Genghis Khan, at a certain point (at the end of the 13th century) decided to convert to Islam because it was politically convenient. Moreover, the Mughal empire was arguably stronger when it was inclusive of all faiths (under the Emperor Akbar) than when it cleaved to exclusive Islam (under the fanatical Aurangzeb).

Secondly, ‘almost all these Muslim rulers indulged seriously in mood-enhancing drugs. Opium was a favourite, but for most the drug of choice was alcohol, which was enjoyed often in large quantities by men and women. Several died from its effects.’ When Babur tried to give up alcohol by smashing all his gold and silver goblets and distributing the pieces to the poor, his resolve lasted only a year or two before he went back to his drinking parties.

Thirdly, ‘women often play a prominent part in affairs. They are patrons of architecture, investors in business, central figures in court politics, players in succession struggles, and at times they even came to rule, with the approval of at least some of their menfolk’. A well-known example is Nur Jahan, favourite wife of the Mughal emperor Jahangir, daughter of Itimad-ud-Daula and aunt of Mumtaz Mahal, the wife of the emperor Shah Jahan whose premature death inspired him to build the Taj Mahal.

Unsurprisingly, the Taj gets a double-page spread to itself, with photographs showing both the whole tomb and gardens and the exquisite details of marble inlay and calligraphy. What is surprising, though, is the flat statement that ‘The architect was Ustad Ahmad of Lahore’. In fact, no architect’s name is officially recorded – Shah Jahan seems to have wanted the credit all for himself – and there are at least two possibilities: Ustad Ahmad Lahauri, who laid the foundations of the Red Fort, and Mir Abdul Karim, the favourite architect of Jahangir. ‘The lack of information about the identity of the architect of the Taj Mahal has led to all kinds of fanciful speculation,’ Ebba Koch notes in her book, The Complete Taj Mahal, published by Thames & Hudson in autumn 2006. This definitive publication is not mentioned in the bibliography of The Mughal Emperors, despite there being an entry for William Dalrymple’s equally recent, if less scholarly book about Bahadur Shah, The Last Mughal.

Review by Andrew Robinson, the author of several books on Indian culture. He is a visiting fellow of Wolfson College, Cambridge.