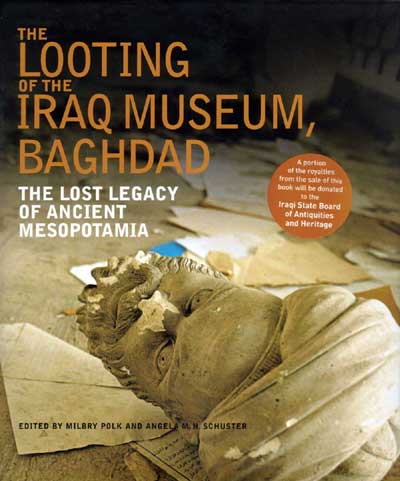 A s the recent elections have shown, there are few items more controversial than the war in Iraq. Do we see it as being an unnecessary and aggressive war? Or do we see it as a noble attempt to rid Iraq of a hated tyrant?

For archaeologists, the catalyst in this debate is the looting of the National Museum in Baghdad, the subject of a new book, The Looting of the Iraq Museum, Baghdad: The lost legacy of Ancient Mesopotamia, edited by Milbry Polk and Angela Schuster, and published very elegantly by Harry N Abrams, Inc for £20.00. The book is in fact something of a hybrid. The basic book, perhaps 90% of the whole, has little to do with the looting, but consist of a number of essays on the history of Mesopotamia/Iraq, from the dawn of civilisation, down to the coming of Islam. This is all non-controversial, and provides an excellent and elegant introduction to the ‘cradle of civilisation’.

Onto this has been bolted an emotive account of the looting of the museum and various other atrocities in Iraq. This, it must be said, makes little attempt at being balanced: there is for instance no mention of Colonel Bogdanos, the American reservist who was given the task of overseeing the museum and its problems, and one suspects that he would give a somewhat different story.

Nevertheless, this approach appears to have been very successful, and the book is clearly selling very well: a portion of the royalties will be donated to the Iraq State Board of Antiquities and Heritage, so please add this book to your collection.

But behind all this, is there perhaps a deeper philosophical point to be made? Around the world, there is an establishment consensus that every nation should have a national museum, where all the greatest national treasures should be gathered together. This is a doctrine of which those who work in national museums naturally heartily approve. The impression is given that national museums are safe, secure, and all the objects in them will be properly conserved. Any suspicion of the reverse is total anathema. Thus, when any national museum suffers a disaster like that of Baghdad, other national museums are outraged, and do their best to assure us that this is a one-off occurrence that will never occur again. But are national museums really such a good thing? Do we really want to concentrate all our best objects in one place under a single roof?

Nationalism is a two-edged sword. A national museum can help promote a sense of belonging by helping to legitimate the nation. Equally, it can form a focus for the opposition. And according to some accounts, at least some of the looting of Baghdad Museum was political. The National Museum was seen as one of Saddam Hussein’s palaces, and here was a chance to cause mayhem.

So is not the answer to disperse collections rather more? Partly this dissemination would take place within each country, with some objects in the national museum, but others in regional, and indeed, site museums. And should not other objects be scattered around the world? I sometimes think that the big need in archaeology is for some good world museums in China, so that the Chinese can realise that they are not the only great civilisation in the world. There was a great tradition in the 1930s of the division of spoils so that half of all finds remain in the host country and the other half are treasured abroad. The benefits can be seen in the recent publication of the Roman army finds from Dura Europos, where the finds were left behind in the host country, but have now all vanished, and the report is based on those finds that were sent abroad.

These questions are not easy to resolve, but perhaps when one regards the dreadful problems caused by the looting in Baghdad, these questions should be raised once again, and one should worry not just about the looting itself, but also at some of the underlying philosophies that may have exacerbated it.