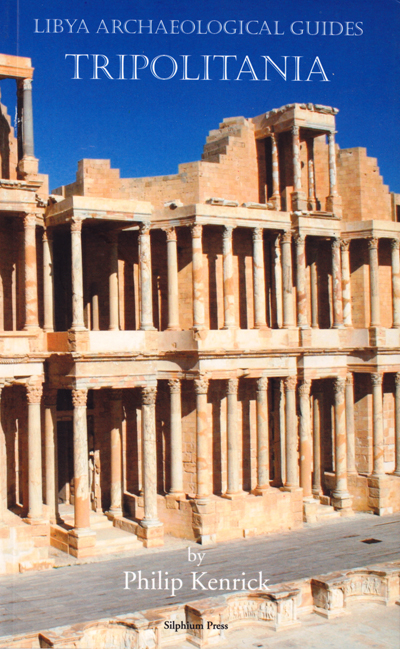 The modern country of Libya – the Socialist People’s Libyan Arab Jamahiriya – encompasses one of the richest parts of the Roman Empire, but for the past 30 years it has been off the tourist track due to political difficulties. Now it is opening up once again, but it lacks a good guide book, the previous best being Denys Haynes’ authoritative work published in 1946. The Society for Libyan Studies has stepped into the breach with Philip Kenrick’s Tripolitania, the first in what will hopefully be a series of archaeological guides providing comprehensive coverage of Libya’s antiquities.

Philip Kenrick is a key figure in Libyan studies. Our foremost authority on Late Roman pottery in the Mediterranean, he has rescued several important Libyan sites dug by the British after the War by publishing much-needed reports on their discoveries. The only other person who knows Libya as well, David Mattingley, has been through this book with a toothcomb and given the ringing endorsement that ‘this is THE guidebook to Libya’s archaeology’.

Tripolitania covers a small part of Libya, but the remains within it testify to the area’s former wealth. Archaeologically, the region is dominated by the two cities of Sabratha and Lepcis Magna. These magnificent ruins are essential destinations for those interested in the activities of the Roman Empire, and popular stops on the tourist trail. Lepcis Magna was the birth place of the Emperor Septimius Severus, who lavished an extraordinarily ornate suite of public buildings on the city, which survive as an astonishing testament to Imperial munificence. Well-meaning though they were, not all of these gifts proved desirous, as the state-of-the-art new harbour facility silted up almost immediately, dealing the city a massive economic blow.

The great strength of this volume is that it ranges far beyond these essential sites, and provides full details of the many opulent villas and other sites speckling the interior. This successfully opens up the rich archaeological heritage within the inhospitable and often featureless desert environment to those hardy enough to venture off in search of it. Philip has a unique appreciation of this road less travelled, as he himself took part in the exploration of this region directed by Olwen Brogan in the early 1970s. Philip has revisited all these sites, comparing the plan drawn then with what remains today. He also took his Satnav with him and all directions are recorded by latitude and longitude – he does not tell those searching for the imposing mausoleum at Qasr Doga, for instance, to turn left at the third turning; he tells them to turn left at N 32˚ 26.283′ E 13˚ 42.728′.