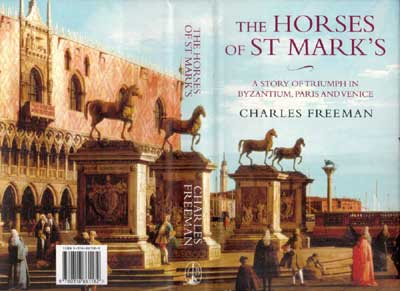 In 1204, the Venetians, leading the Fourth Crusade, decided to postpone their attack on the infidel, and turned aside to sack the greatest city of Christendom, Constantinople. This proved extremely profitable, and among the loot that the Venetians carried home with them were four magnificent bronze horses which had stood in the Hippodrome. These they took back to Venice and placed in front of St Mark’s where they are still one of the greatest attractions. They are now the subject of a new book, The Horses of St Mark’s by Charles Freeman (Little, Brown £16.99).

The greatest weakness of the book is also its greatest strength: it meanders. The author admits that he originally intended to write a history of Venice, but instead this new subject gives him a splendid opportunity to wander down many side paths. Originally the horses were probably harnessed to a four-horse chariot, a quadriga, and when they first appear on the historical stage, they stood in the Hippodrome where they were much admired. In the Fourth Crusade they were then taken back to Venice, where they remained until 1798 when Napoleon battered Venice into surrender and in his turn took the horses as plunder back to Paris. There they took pride of place in his triumphal procession, together with many of the finest examples of art from Italy. Twenty years later they were brought back to Venice through the intercession of the great sculptor, Canova, who was then at the height of his powers and persuaded the French to return much of the loot.

But where did the horses come from in the first place? Were they made in Constantinople or were they themselves loot from Rome, or possibly from Greece? Throughout the 19th century, debate raged as to whether they were Greek or Roman, and the book gives an excellent account of the importance of the Elgin Marbles, which amazed Canova among other people, with their realism and gave a new meaning to ‘Greek’ art. The debate remained inconclusive and it is only in the late 20th century that dating progress has been made, typically by the scientists. The horses were not made of bronze as had been expected, but of copper which implies a far more complex casting technique, and each horse may have been made from several different castings. The reason they were made of copper is that they were originally gilded, which requires a copper base, and Andrew Oddy who did the research argued that this technique was only invented in the 2nd century AD. It is therefore perfectly possible that the horses were originally made in Constantinople, perhaps even created to stand in the Hippodrome. There are many different stories told in this book, many of them about Venice and this is an interesting account, well told.