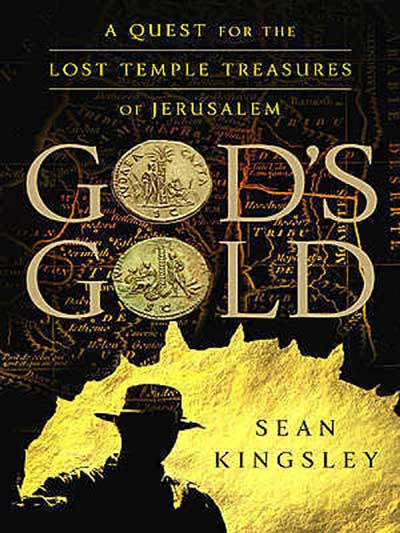 In AD 70, the Roman Emperor Titus finally conquered the Jews and carted off a huge treasure from the Temple at Jerusalem back to Rome. There he celebrated a magnificent triumph, melting down much of the treasure and using it as bullion. From the proceeds he was able not only to replenish the treasury that had been emptied by Nero, but also to build the Colosseum as well.
Three particular items were preserved from the Temple at Jerusalem, and became the centre pieces of his new Temple of Peace.

These items are illustrated on the Arch of Titus, which still survives in Rome. They constituted a table (the Table of the Divine Presence), some silver trumpets, and above all the Menorah – the candelabrum on which burn seven candles forming the light of the world. This has become the symbol of Judaism just as the cross is the symbol of Christianity. What has happened to all these temple treasures? Some of the more extreme orthodox Jews believe that they remain in Rome, and are concealed somewhere in the Vatican. Indeed in 1996, Israel even made a formal petition to the Vatican for a list of all the Temple treasures in their possession with a view to repatriation.

The Vatican did not reply. However, evidence for the survival of the treasure, based on the supposed sightings of a medieval traveller, is easily demolished. Thus in God’s Gold: The Quest for the Lost Temple Treasures of Jerusalem, Sean Kingsley, the managing editor of the ancient art and archaeology magazine Minerva, tells the story of these treasures and what became of them.

Kingsley explains how the treasures were placed by Titus in his new Temple of Peace, and that there they remained for 300 years – until AD 455 when the Vandals sacked Rome and, according to the 8th century historian Theophanes, carried the treasures of Titus off to Carthage.

However in 533 North Africa was reconquered by Belisarius for the Western Roman Empire, and according to Procopius, the last of the good Roman historians, the treasures of the Jews which Titus has taken to Rome were taken to Constantinople. What happened then? So far Sean Kingsley sets out a convincing account of the travels of the treasures – from Jerusalem to Rome, to Carthage and thence to Constantinople.

Thereafter, the story becomes murkier. In a gossipy aside Procopius said that the treasures were returned by Justinian to Jerusalem, to the sanctuaries of the Christians, presumably the Church of the Holy Sepulchre. Soon after, in 614, Jerusalem was sacked by the Persians who spent much time carrying off the remains of the True Cross. Yet there is no mention of any treasures of the Jews. However, there is an account of three caskets that were spirited away and were concealed in the Monastery of Saint Theodosius. The author wonders whether any of these three caskets contained the treasures, and if so, are they still buried somewhere in the vicinity of the Monastery? The line of argument is by this time somewhat thin: all one can say is that despite extensive treasure hunting, no treasures have yet been found.

Ultimately, Kingsley presents a fascinating account in God’s Gold. The main story line is somewhat controversial but he tells it with gusto, interspersing the historical accounts with accounts of his own adventures, both in the Minerva office, and of his travels across the eastern Mediterranean in his quest for evidence.

The book is bolstered by much background information – a fascinating account of Jewish history and a long excursus on the triumph of Titus. At times the prose is a little over the top for my taste but there is much fascinating detail. I particularly liked his account of the site of Qumran where the famous scrolls were found in the nearby caves. Qumran’s monastic excavator originally interpreted the site as an Essene monastery but recent work suggest it is more likely to have been a rich country villa.

This is an absorbing read. It may not be well-received by some orthodox Jews but I am sure everyone else will find it to be a cracking good story. A.S.