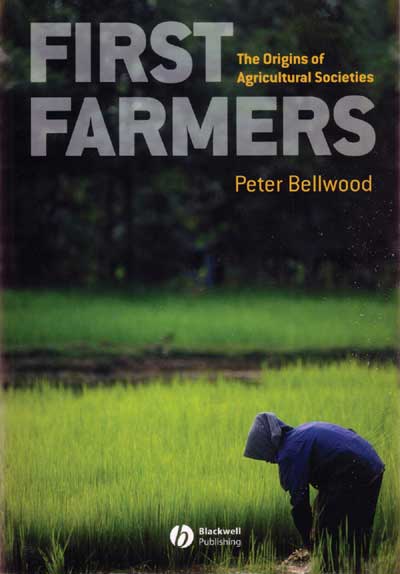 Why did Foragers become Farmers? Or in archaeological terms, why did the Mesolithic turn into the Neolithic? It was about a generation ago that anthropologists, observing the bushmen in Africa, noted that they seemed to have much more spare time and to work less hard than farmers. So why make the change from hunting and gathering to farming? I have two massive books in front of me that seek to explain this paradox. The first, The Agricultural Revolution in Prehistory by Graeme Barker, the newly appointed Disney Professor of Archaeology at Cambridge, is published by the Oxford University Press, for £80 in hard back and is 600 pages long. The other is First Farmers: The Origins of Agricultural Society is by Peter Bellwood, Professor of Archaeology at the Australian National University and is £17.99 in paperback.

Graeme Barker’s book is magisterial in scope and authority. I always believe that no one should be appointed a Professor until they have written a ‘big book’, an apologia pro vita sua as Cardinal Newman termed it, a justification for their academic existence, making sense of their subject in terms that are both acceptable to their peers as well as comprehensible to the layman. This is Graeme Barker’s ‘big book’. He begins with a historical survey looking at the classic clashes of the 1960s and 70s over the reasons for the Neolithic revolution. But how do we distinguish foragers and farmers? (Note incidentally, that ‘huntergatherers’ have now been replaced by ‘foragers’.) Here the latest scientific techniques are beginning to help by studying the chemical and DNA analysis of bones of both the people and the animals: foragers tend to eat more fish, farmers eat more meat. He then goes on to a world wide survey, starting in South West Asia where farming first began. He then moves to Central and South Asia and the wheat/rice frontier, then through to tubers (i.e. potatoes) and maize in the Americas before coming through to Africa and the Bantu farmlands, ending up in the well trodden paths of Europe, asking how far the Neolithic revolution in Europe was in fact derived from the Near East.

There are two main drivers, he suggests, to the emergence of agriculture, a combination of climate change and social evolution. In the previous 40,000 to 50,000 years, modern humans emerged, with ‘insatiable curiosity and new-found creativity’, which took human foragers throughout most of the world. When this new force was combined with the impact of rapid climate change at the end of the ice ages, agriculture and sedentism, in their various forms, were likely to emerge.

The book can in many ways be considered the next stage on from Steven Mithen’s book After the Ice. Graeme Barker has himself worked in many different parts of the world and here he triumphantly stakes his claim to the Cambridge chair. He is clearly a worthy successor to Grahame Clark, Glyn Daniel and Colin Renfrew.

Peter Bellwood tackles the same subject from a slightly different perspective. He too is the product of Cambridge, though of a slightly older generation, beginning his studies under the headship of Grahame Clark and forming part of the great Cambridge diaspora that Clark promoted. Thus in 1967, he was appointed to a lectureship in New Zealand and in 1973 he moved to the Australian National University, so here we see the first farmers from an Antipodean view point. He begins like Graeme Barker in South West Asia and then sees the spread to Africa, East Asia, South East Asia and Oceania and then the Americas.

However then he differs in linking the spread of Agriculture with the spread of the languages. Colin Renfrew has of course made linguistics once more a respectable topic of study for archaeologists, but in the Far East the distinctive spread of the various different linguistic families has long tempted archaeologists to link this with the spread of peoples and ideas, and Peter Bellwood concludes by looking at genetics, skeletal anthropology and what he calls the people factor. The transition to farming is certainly a topic of perpetual fascination, and between them these two books provide fascinating surveys of the latest thoughts and discoveries.