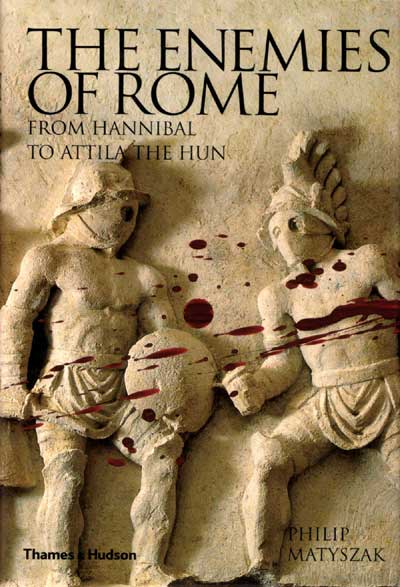 Many believe that Rome was glorious, and that Rome brought civilisation – law, architecture, literature, a better lifestyle – into the Barbarian darkness of the conquered people.
But was this really so? Philip Matyszak presents the alternative view.
His book tells the story of the growth and eventual demise of Rome from the perspective of those who fought against it. He argues that many of Rome’s enemies, such as the Celts and Dracians, were developing their own civilisations before being wiped out by the Romans. And had Rome not crushed its rival powers, contends Matyszak, the Dark Ages may never have happened. For at Rome’s collapse, no other powerful civilisation remained to absorb the impact.
However, this is not some abstract discourse; rather Matyszak cleverly uses the individuals who resisted Rome to develop his argument. Thus we read of the roles played by legendary enemies of Rome – including Hannibal, Boudicca, and Cleopatra – all of whom killed themselves rather than face capture by the Romans. But we are also introduced to comparatively less widely-known figures, such as Viriathus the guerrilla leader, and Mithridates the connoisseur of poisons. Clearly, while some enemies were noble, others were murdering villains.
To paraphrase Hegel, the dominant force will always be hated and ultimately overthrown. Little wonder that mighty Rome had its enemies, for so too did the previously mighty civilisations against whom Rome fought. However, the utter wrath of the Roman Empire described by Matyszak, tends to be downplayed, or even sanctioned, with only its splendours emphasised. Consequently, this alternative approach represents a refreshing balance to accounts focusing on the glory of Rome.