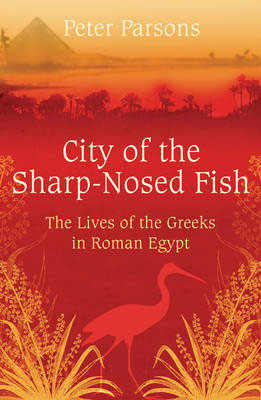 City of the Sharp-Nosed Fish
Peter Parsons
Weidenfeld and Nicholson, £20.00

While wandering through the gloomy, overstuffed galleries of Cairo’s Egyptian Museum in a bit of a daze, like so many before me, I was startled to come upon a single cabinet of mummy portraits of ancient Egyptians who lived in the four centuries of Roman rule that followed Rome’s defeat of Antony and Cleopatra in 31 BC. The visual contrast with the alien iconography of pharaonic Egypt (however fascinating that may be) could hardly have been starker. These paintings of largely unknown men and women in Greek or Roman dress who died some two thousand years ago gazed so frankly and individually that the subjects seemed almost to speak – as is also true of their images in The Mysterious Fayum Portraits: Faces from Ancient Egypt, the wonderful collection by Euphrosyne Doxiadis published in 1995, which began to make the portraits known to the general public.

In City of the Sharp-Nosed Fish, these Graeco-Roman Egyptians really do speak, and tell us vividly, often in amazing detail, of their everyday lives, their jobs and careers, their families, their frustrations and their hopes – through their own words written in the vast numbers of Greek papyri that have accidentally survived in the dry conditions of Egypt.

Peter Parsons, who was Regius professor of Greek at Oxford University, has distilled a lifetime’s work on papyri into a concise, delightfully readable and richly illuminating book, complemented by some well-chosen illustrations, though occasionally interrupted by unnecessary repetition. His book is a splendid example of the virtues of popularising deep and recondite scholarship – his own and that of the many other papyrologists whom he credits, including his first teacher at Oxford, the Revd Dr John Barns, ‘a genial and eccentric figure, who straightened papyri by sitting on them’.

The archaeological story began about a century ago when two Oxford graduates, Bernard Grenfell and Arthur Hunt, funded by the Egypt Exploration Fund, excavated mounds of ancient rubbish at el-Behnesa. This forlorn place was more or less ignored by the savants with Napoleon’s Egypt expedition of 1798 in their great Description de l’Egypte because so little remained there, bar the top of a Roman column. But el-Behnesa was once the site of Oxyrhynchos, a flourishing Graeco- Roman city named after the sharp-nosed oxyrhynchos fish, on the western edge of the Nile valley some 50 miles south of the Fayum region. Grenfell and Hunt had discovered ‘a wealth of garbage’, writes Parsons, ‘a unique dustbin of vanished lives’.

Over six seasons, from 1897-1907, they dug up an estimated 500,000 pieces and scraps of papyrus filling 700 boxes, that were subsequently added to by other excavators.Publication of The Oxyrhynchus Papyri continues today, with volume LXXII due out in 2007 and at least 40 more volumes planned.

‘Pompeii preserves a snapshot of Roman life, as it was on one catastrophic day, the buildings and the bodies of those who lived there. Oxyrhynchos offers the converse: not bodies or buildings, but the paper-trail (a trail of paper thrown away by its owners) of a whole culture,’ says Parsons. He gives a few striking examples. ‘The theatre has vanished, but we still have some of the prompt-copies that its actors used. The baths have vanished, but we can reconstruct their dynasty of cloakroom attendants.

The market has vanished, but we know its porridge-stall and its imported cow-pats and the harassed officials who collected the tax on brothels. Long-dead citizens, of whom we have no portrait or tombstone, communicate from their documents. For some we have enough for a soap-opera… For others, there is a single glimpse’.

The papyri were found all jumbled up, since they were regarded as rubbish. Thus each box has contained surprises. Lines from Homer on one scrap lie next to a scrap from a long-forgotten Greek author, or a shopping list, a tax receipt or the remains of a private letter. A new papyrus may offer some unknown Greek poetry, or instead ‘unique evidence for the inflation of donkey prices at the height of the Roman empire.’ One document (illustrated with an amusing photo) has a standard report to the local governor from a tax collector on one side, dated November/December AD 229, and on the other, apparently dated 8 March 243, a primitively written Greek maxim – ‘It is our habit to think the rich fortunate’ – above a doodle of a face with large and long ears. The second writer may have been a schoolboy or a half-literate adult, thinks Parsons, ‘but it seems that his irony was more developed than his script: the rich (the taxpayers on the front) are thought fortunate – yet consider wealthy King Midas, whom the god Apollo endowed with ass’s ears.’ There are fascinating chapters on Egypt’s relationship with Greece and Rome, on letter writing and on surviving life’s vicissitudes: disease, accidents, crime and bad luck. But perhaps the most engrossing chapter concerns the Nile. The river’s annual inundation of its valley in July – October (now of course controlled by the High Dam at Aswan) was a matter of life and death for Oxyrhynchites, along with every other Egyptian.

Too little water, and some land would go unirrigated; too much, and there would be damage to farmland and an outbreak of the plague. The optimum flood was considered to be 16 cubits (some 27 feet) above low water. Maintaining dikes to control the flooding was vital but unpopular work, which some tried to avoid by bribing the dike supervisors, causing public unrest. But on the evidence of one Oxyrhynchos papyrus, a formal complaint about a corrupt dike supervisor sent to the local governor by some village elders fizzled out because the elders proved unwilling, on oath, to produce the names of the bribers. Presumably they too were implicated in the bribery.

Another papyrus deals with transport of goods by boat on the Nile and the system of checking the cargo using samples. Much grain was sent by water from Egypt to Rome, which depended on Egyptian corn for four months of each year. The samples were taken to prevent adulteration, such as earth mixed with the grain, en route. They were sent separately downriver to Alexandria in earthenware jars in the charge of special officers.

One such jar, dated at Oxyrhynchos in 2 BC, survives. The details are inked around its sides. They refer to two captains, Ammonios and Hermias, of two government boats. ‘This is a sample of what we embarked from the produce of the 28th year of Caesar… and we have jointly sealed it with both our seals, the seal of Ammonios which has an image of Ammon and the seal of Hermias which has an image of Harpocrates…’ In many ways, human behaviour emerges from the Oxyrhynchos archive as unchanged by two millennia. As witness, the formal specimen letters providing models for how to offer condolences, recommendations, advice, thanks and congratulations.

However the last category includes the congratulation of a slave on receiving his freedom. This – and the numerous references to slavery throughout the book – pulls the reader up sharply. Like all fine historians sympathetic to their period, Parsons brings the past alive, but at the same time reminds us that it really is another country.

Review by Andrew Robinson. Robinson has written books that include The Man Who Deciphered Linear B, The Story of Writing and Lost Languages. He was the literary editor of The Times Higher Education Supplement and is now a visiting fellow of Wolfson College, Cambridge.