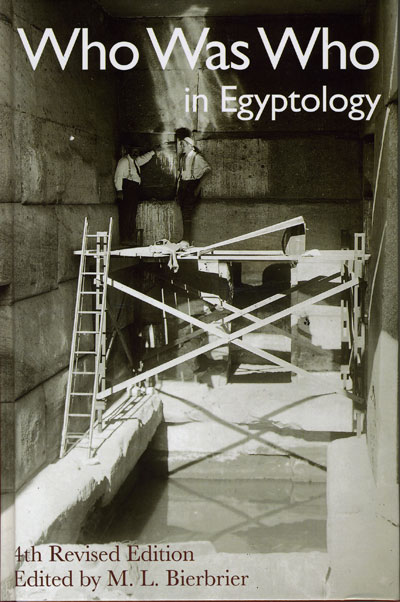 The Egypt Exploration Society has updated their compendium of Egyptologists after a gap of nearly 20 years. Andrew Robinson puts this long-awaited edition to the test.

More so than any other ancient civilisation, that of Egypt has been explored, collected, and studied by an amazing variety of individuals. They range from rulers such as Napoleon Bonaparte and aristocrats, consuls, and fabulously wealthy businessmen, to scientists, scholars as different as the linguists Jean-François Champollion and Richard Lepsius, travellers, and excavators such as Giovanni Belzoni, Sir Flinders Petrie, and Howard Carter. Then, of course, there are the hundreds of professional Egyptologists in our own time, most known only to specialists.

Virtually without exception, they are covered in Who Was Who in Egyptology, a book first published by the Egypt Exploration Society in 1951 at the (unacknowledged) expense of Sir Alan Gardiner, and now in its fourth revised edition – this latest one appearing after a gap of almost two decades. The only deliberate exclusions are Egyptologists who are still alive, and those born before 1500: so there are no entries for Alexander the Great or Herodotus, but there are entries for Egyptologists who died as recently as 2011. For any reader with more than a passing interest in the history of Egyptology, this biographical dictionary is indispensable as a reference tool.

How to test such an established reference work? Having recently published the first English-language biography of Champollion – who is acknowledged by Who Was Who to be the founder of Egyptology as a science, with his portrait forming the book’s frontispiece – I decided to look up each of the members of the Franco-Tuscan expedition to Egypt led by Champollion and his Italian student Ippolito Rosellini in 1828-1829. This crucial visit, lasting well over a year, was the first occasion since the days of Classical Rome when anyone could read the hieroglyphic inscriptions on the monuments beside the Nile.

Roll-call of experts
The book passed my test with flying colours. There were seven French and seven Italian members of the Franco-Tuscan team, only a few of whom have a substantial name in Egyptology. Yet, out of these 14, 11 have entries in the book, and they include the obscure French painter François Lehoux and the Italian botanist Giuseppe Raddi, who took ill in the Nile Delta, left the expedition before it had properly begun, and died on the way back to Italy.

The emphasis of all entries is on facts and figures, not opinions. ‘It has been decided to avoid any personal comments on the merits of any individual and to present a concise biographical summary,’ comments editor Morris Bierbrier, a former assistant keeper at the British Museum.

By and large, the book maintains this stance throughout, and is probably the better for it. Who Was Who is the book for those wanting a brief, accurate, and readable survey of a career, plus a list of key publications. It is not the place to read about the inside story of Carter’s discovery of the tomb of Tutankhamun, for example, or the longstanding rivalry between Thomas Young and Champollion to decipher the hieroglyphs, although there are references in many entries to the strongly polarising effect that Champollion exerted on other Egyptologists, especially his colleagues in France: this reaction encompassed staunch friendship with the Duke of Blacas (the French king’s right-hand courtier) and unrelenting hostility from Edmé Jomard (the lead editor of the French government’s publication, Description de l’Égypte).

In practice, however, the longer entries inevitably have to offer some judgements as well as facts. I could not resist turning to the one for the prolific and controversial figure, Sir Wallis Budge, who was keeper of Egyptian antiquities at the British Museum for three decades from 1894-1924, and whose long-outdated works are still doing the rounds among both serious students and enthusiasts for ancient Egypt, despite the scorn for them of professional Egyptologists. No breath of scandal is allowed to sully Budge’s entry, even though Budge’s predecessor as keeper, Sir Peter le Page Renouf, thought Budge a ‘despicable scoundrel’, a charlatan, and a plagiarist! Instead, the Budge entry comments, fairly enough, that ‘in his text editions, Budge was too prolific for careful work, and many of them are inaccurate by modern standards; he persisted in the use of an old system of transcription, and did not utilize many of the grammatical discoveries of the Berlin School; nevertheless without his phenomenal energy and devotion, many hieratic, Coptic, and other texts of fundamental importance would not have become known and been made available until a very much later date’.

The entry on Petrie is also critical in parts. Due respect is naturally paid to his achievements: he ‘made more major archaeological discoveries than any other archaeologist’, and he ‘advanced the whole approach to archaeology, his methods and techniques being revolutionary in the Near East at the time’. Yet the entry also remarks that Petrie ‘attended no schools or college and this lack of formal education was both his strength and his weakness in later life, for while he pursued his aims directly and was not given to accepting out-of-date methods or theories, he also ignored the views of many who were making valuable contributions to Egyptology and archaeology.’ Again, fair enough, I think.

Even in the more neutral entry for James Henry Breasted, the first professional Egyptologist to emerge from the United States, who founded the Oriental Institute at the University of Chicago, the book comments that Breasted’s A History of Egypt, published as long ago as 1905, is ‘probably the best general history of Pharaonic Egypt ever published’. While there may have been wide support for this opinion in the recent and not-so-recent past, it is certainly not universally shared: for instance, the Egyptologist John Romer, in his attempt at an all-encompassing history of Egypt, published by Penguin in 2012, dismisses Breasted’s famous work in a single sentence. Here, Who Was Who may have become a little out of date.

Final verdict
Judgements also have to be made about which entries deserve a portrait image, and which do not. The book’s relatively infrequent photographs and paintings, which were not included in the first and second editions, undoubtedly add immeasurably to the value and pleasure of the later editions. In a sense, they leaven the neutral tone of most of the entries and provide at least a hint of personality behind the facts. But it is not easy to see a principle at work in the selection of images, particularly among the recently deceased Egyptologists. If Champollion gets a portrait, which of course he should, then why no portrait for Rosellini, a scholar of foundational significance? And if Joseph Fourier has a portrait, which again he should, so really should his contemporary Jomard.

Nonetheless, this book is a superb achievement by the Egypt Exploration Society, for which we should be grateful. It is fascinating to see the interconnections between individuals, all of them driven by one alluring subject. Champollion dreamed of visiting Egypt as an impecunious youth in Grenoble, but required royal patronage to afford the trip just before his death. Young, who had plenty of money to afford a visit, never had the least desire to go to Egypt. But neither man could help himself from becoming entangled in the challenge of hieroglyphic decipherment. Who Was Who reminds us, more than any other book on ancient Egypt, of the dramatic diversity of Egyptologists.
Andrew Robinson is the author of Cracking the Egyptian Code: The Revolutionary Life of Jean-François Champollion.