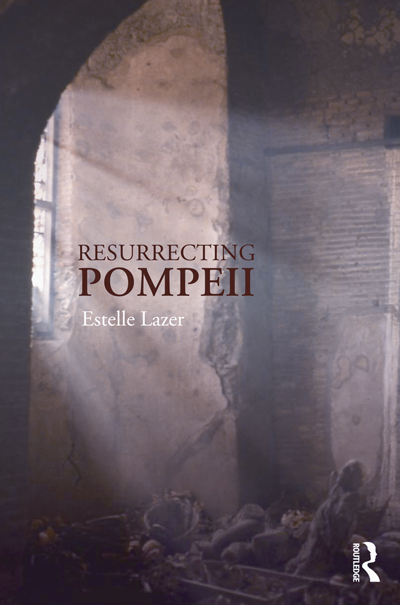 Since it was first excavated in 1748, the drama of Pompeii has excited the imaginations of archaeologists and tourists alike. Our impression of the site is informed primarily by a storytelling approach based largely on circumstantial evidence, and promoted by 18th- and 19th-century archaeologists who were not averse to holding ‘excavations’ to impress celebrity visitors: the House of the Surgeon was ‘discovered’ at least three times, each time in the presence of a different dignatory.

Even as late as the excavations in 1926-1934, Amedeo Maiuri colourfully described the three individuals he found in the Casa del Menandro as looters, based purely on where and with what they were found. The remains were removed en bloc and later put on display, apparently as they had been discovered. Yet, one has two left legs and another has a heel bone where the knee cap should be. So, what is real, and what is staged?

Estelle Lazer, in this highly accessible and compelling book, re-examines the data, both skeletal and historical, to reveal that all is not quite as it seems. Human remains, believed by archaeologists in the past to be of little intrinsic value, were frequently overlooked in favour of prestige artefacts. Too often they were used as props for vignettes depicting the tragic last moments of the dead – with colourful but subjective interpretations attributed to them.

The author discusses two different but related issues: why, despite its popularity, was so little research done on the site and its finds until the second half of the 20th century? And, given the complexity of dealing with material that has been compromised through handling, what can we still learn from the remains?

To answer this second point, Lazer forensically re-examines the skeletal evidence and the casts of the human forms created from hollows in the volcanic fallout. She provides fascinating insights into the diet, diseases, lifestyles, and final moments of the volcano’s victims – every bit as absorbing and as vivid as those told by an 18th- or 19th-century storyteller.