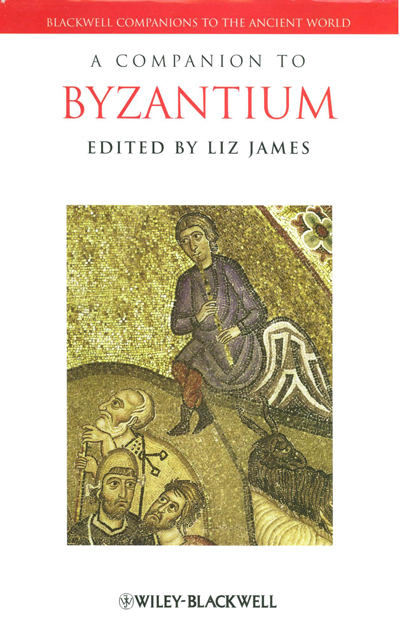 Spanning Emperor Constantine’s inauguration of Constantinople in AD 330 to the city’s fall to the Ottomans in AD 1453, Byzantium is one of history’s most complex, fascinating, and misunderstood Empires.

A Companion to Byzantium aims not to provide a blow-by-blow narrative history describing every nuance of Byzantium, but to explore issues and themes that are currently driving new approaches to understanding this empire. In this work, Liz James, Professor of Art History at Sussex University and a leading figure in Byzantine studies, has compiled 27 chapters authored by an eminent group of scholars.

The book is divided into four parts: ‘Being Byzantine’, ‘God and the World’, ‘Reading Byzantine Texts’, and ‘Some Questions on Material Culture’. The chapters are carefully-chosen, short and specific; as such they make for satisfying individual essays that combine to produce a well-judged and complimentary whole.

The book begins with ‘Byzantium: A Very Very Short Introduction’ by Liz James, which provides a brief overview of the volume and concisely underlines the book’s aims. This introductory chapter, along with an extremely useful crib sheet of Byzantine rulers, a timeline of important dates, the volume’s extensive bibliography, and assorted other front matter can be consulted free of charge on the Wiley Online Library website (http://onlinelibrary.wiley.com/).

For this reviewer the first section discussing what it means to be Byzantine was the most thought-provoking. This arresting topic is addressed with a stimulating medley of chapters covering a wide range of issues, including Byzantine attitudes to identity and appearance, urban centres and provinces, and entertainment. Of particular note are two original and engaging chapters, ‘The Memory Culture of Byzantium’ and ‘Emotions in Byzantium’, which highlight new paths for future research. Byzantine authors seem to have had a fully developed emotional range, revelling in feelings that defy modern equivalents, such as katanuxis (which can be interpreted as a torpor of the mind or spiritual stupor) and akedia (a kind of spiritual fatigue).

Byzantine emotions were deeply entwined with religion. The church was at the heart of life, and it is therefore apt that Part Two concentrates on Byzantium as an Empire of God, by examining the role of Christianity in shaping Byzantine thoughts and actions.

Part Three capitalises on the rich surviving corpus of Byzantine literature, which ranges from poetry and fiction to rhetoric and hagiography. Exploring what such a breadth of work can tell us about perceptions of the world, lays the foundations for a compelling discussion of how we, and the Byzantines before us, interpreted this writing. Byzantium was, like any society, an endlessly evolving web of interconnecting stories that shaped the actions and perceptions of its people.

The final part of the book takes material culture as its theme and is particularly valuable for archaeologists – both armchair and professional. It opens with James Crow’s chapter ‘Archaeology’, a piece that belies its all-encompassing title by offering a concise and informative introduction to the discipline’s essential contribution to our understanding of Byzantium.

The subsequent chapters skilfully evaluate how objects, focusing mainly on artwork, have been used to construct Byzantine histories. There is tactility implicit in Byzantine artefacts, a belief that objects could share in the emotional lives of those that venerated them.

Overall, the scope of Companion is impressive. The great majority of chapters are well informed and packed with the latest research, providing insights into a variety of intriguing topics all too often overlooked in previous studies. Considering the price of the book, however, the lack of colour images is disappointing. A topic as rich and vibrant as Byzantium deserves colour illustration.

In the final analysis, this perceptive and compelling compendium is neither an introduction to Byzantium, nor a complete guide to the Byzantine Empire. Instead, it succeeds in its stated aim of being a companion to Byzantium, and should be read as such. This is not the first stop for a Byzantine history novice, but makes an excellent companion for those wishing to expand their knowledge. While the frugally minded might understandably baulk at the cover price, I suggest keeping an eye out for the paperback edition. In the meantime, this companion is a must for serious scholars of Byzantium, and a significant contribution to the discipline.

Review by Katie Green, researching for a doctorate in Byzantine studies at the University of Newcastle