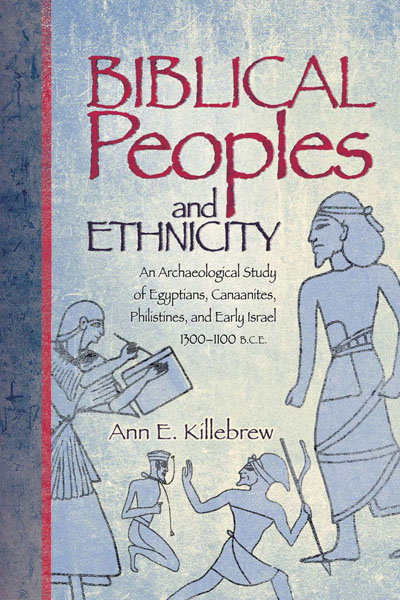 The Late Bronze Age of the Near East, roughly spanning 1400-1200 BCE (Before Christian Era), has often been characterized as an ‘age of internationalism.’ The major political powers, Egypt, Mycenae, Hittite Hatti, and Assyria participated in global economy, well developed commercial and political contacts including exchange of technology, ideologies, culture, and knowledge. By the late 13th and early 12th centuries BC, the Aegean and eastern Mediterranean regions were undergoing rapid change. The Hittite Empire was destroyed, the Mycenaean palace system was disintegrating and Egypt was going through a period of economic and political deterioration. Scholars have tried but failed to explain convincingly the causes of the collapse.

In her first solo book, Ann E Killebrew, an associate professor of Ancient Mediterranean Studies at Pennsylvania State University, compiles a wealth of information about the peoples of the ancient eastern Mediterranean during the Late Bronze to the Early Iron Ages. She summarizes previous research done by many scholars regarding the political structure of the world powers, their spheres of influence and ultimately their collapse in the Late Bronze Age. This breakdown of the empires produced regionally defined peoples. The purpose of this book is to show how different the peoples of the Bible were and how they influenced each other.

The Bible, with its obvious slant, depicts four groups in conflict, the Yahweh-worshipping Israelites, the idol worshipping Canaanites, the imperialistic Egyptians, and the boorish and uncouth Philistines. In the biblical narrative, Israel emerges from slavery in Egypt, conquers the land of Canaan and culminates with settlement in the land as promised by Yahweh to Abraham and his descendants. Much of the narrative can be substantiated through extra biblical material.

Scholars have examined the biblical text, extra biblical texts from Egypt, Ugarit and Mesopotamia, and archaeological finds in order to paint a picture of the diverse cultures of the peoples who inhabited what is today’s Egypt, Israel, Lebanon, Eastern Syria and Transjordan. Killebrew’s original work in this book consists of her analysis of pottery, which can answer a variety of questions about the social and political organisation of a society, in addition to serving as a means for communicating information regarding a pot’s producer, owner or user. She presents detailed typology, gives technological analysis of the various pots, divides them into categories and dates them. The numerous illustrations help the reader understand the gradual changes in a particular society at a given location. For example, Killebrew summarizes her finds regarding the Canaanites as follows: ‘In my view, the relative homogeneity of the thirteenth century B.C.E. ceramic assemblages was a result of the long-term cultural and political interrelations in the region that characterized Canaan through the Middle and Late Bronze Ages’ (p.137). Clearly, she is an expert in the field. However, the lay reader might find the detailed analysis lengthy and tedious.

Often, after summarizing previous research on a topic, she forms her own conclusion. Most impressive and original is her take on one of the most contentious issues facing biblical scholars and archaeologists – the question regarding the origins and emergence of biblical Israel; some wonder whether ancient Israel even existed. To try to solve the controversy, Killebrew adopts a more nuanced approach. She proposes ‘that the emergence of ancient Israel should be interpreted as a process of ethnogenesis, or a gradual emergence of a group identity from a ‘mixed multitude’ of peoples whose origins are likely indigenous and can only be understood in the wider eastern Mediterranean context’ (p.149). Several scholars have suggested that the ancient Israelites were indigenous to the land but no one used her approach. Ethnogenesis is based on three characteristic features: stories of primordial deeds or miracles, change in cult as a result of these primordial deeds, and the existence of an ancestral enemy that cements the group’s cohesion. These basic elements form the key themes in the biblical narrative about the emergence of early Israel. She gives textual evidence from the Hebrew Bible, and Egyptian sources, archaeological evidence from many excavations in Israel and Transjordan that show changes in material culture including architecture, diet, burial customs, and pottery. All these prove the process of ethnogenesis in the case of early Israel. Yet, Israel is not unique in this process. Similar processes of breakdown, fragmentation and transformation were occurring simultaneously throughout much of the region (p.185). Killebrew succeeds in adding another dimension to proving the emergence of early Israel.

This book is very well organised and the language is clear and precise. It contains many maps, illustrations, photographs and tables. Most notable are the extensive endnotes and bibliography (81 pages!).

Lay people will understand the concepts, the many, sometimes conflicting, theories and conclusions of the data presented. Scholars will appreciate the summary of material culture found at various digs, the detailed explanation of the pottery styles and diverse theories of many scholars from the early 20th century to the present. This book is a worthwhile addition to anyone interested in the ancient eastern Mediterranean.