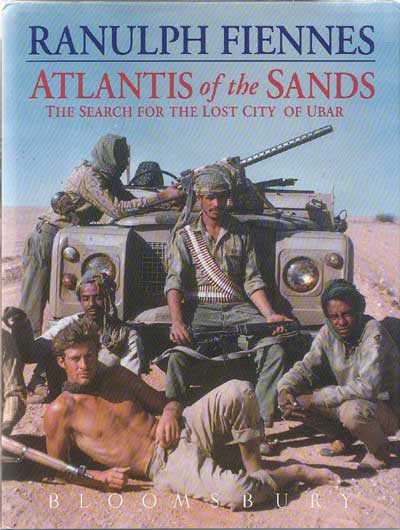 The cover says it all – or seems to. A gung-ho romp through the sandy wastes of the Arabian Empty Quarter in search of a lost civililization.

The quest for the fabled city of Ubar, or Wabar as H. StJ Philby and Lawrence had it, is set against the stirring background of Ranulph Fiennes’s world travels in difficult places and his special forces action in Oman during the Dhofar campaign.

We are told T.E. Lawrence called it ‘Atlantis of the Sands‘, although the book elsewhere credits Bertram Thomas with the same quotation. During WW1 Lawrence tried to persuade the British government to fly an airship across the region to get a closer look.

Wendell Phillips used aerial survey photos to plot his 1950s expedition to find Ubar. Fiennes went to the top, asking NASA’s 1984 Challenger mission to peer down on the Empty Quarter.
They did and saw tracks under the sand. Much of the work however was hard slog and desert driving.

This is the attraction of the book. Racing backwards and forwards across both Oman and time we are served with a series of anecdotes, events and characters ranging from Ptolemy to Prince Charles. Walk-on parts are given to Armand Hammer and even Margaret Thatcher.

Archaeologists, such as Juris Zarins, Dr Abdullah Masry and Dr Abdulrahman Al-Ansary are featured, some as major participants and others as sniffy critics. There are some who feel that Fiennes has hyped and oversimplified his story or even acquired their ideas.

I read this book again after 15 years because I am currently making a film about the Empty Quarter. Having in the 1980s spent two months filming the archaeological excavations at Qaryat Al-Fau, itself a major lost city site from the Hellenistic period on the edge of the Saudi Empty Quarter, I am convinced that Ubar is one of several such settlements in the region, abandoned in the face of advancing desiccation during the last two millennia.

Fiennes admits that ‘this book is no treatise for the specialist’. One has got to be impressed, however, with all that research, lobbying and action. How many archaeologists can strip down a machine gun?