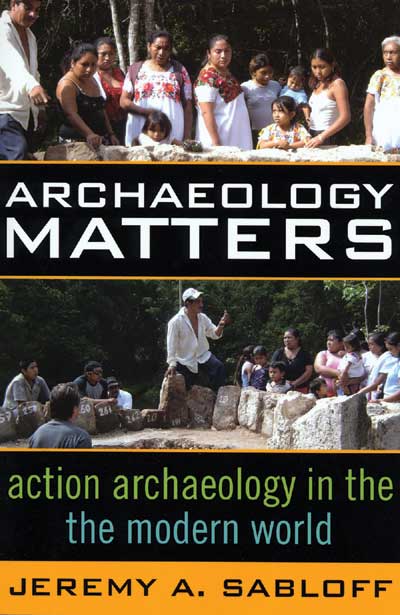 Jeremy Sabloff, the former Director of Penn Museum, wants to make archaeology more relevant to the contemporary world. ‘Action archaeology’ turns out to mean the many different ways in which archaeology can make a difference now. Take the famous Tucson Garbage Project, which began in the 1970s and has since gone national and international. It involves applying an archaeological approach to modern rubbish disposal. Students in white coats and rubber gloves shift the stuff in backyard bins, waste depots, and landfill sites. (Whole hot dogs have been found stratified at levels that imply they are several decades old!) The new insights gained can inform public policy. The fact that dry-cell batteries – an especially hazardous form of household waste – are discarded disproportionately by middle class teenagers and Latino households can be used to direct educational effort.
Other examples abound. Action archaeology can be small-scale and local, like experiments in ‘raised field agriculture’ in Bolivia based on evidence from Pre-Columbian sites; or it can address top global issues, like research that investigates climate change resulting from Bronze Age land clearance and farming.
It is also about breaking down prejudices and barriers, and giving a voice to the oppressed and excluded. The African Burial Ground is a case in point. Over 400 18th century African-American burials were uncovered in Lower Manhattan in the 1990s. These people had been slaves, and osteological analysis of their remains has revealed the harshness of their lives. Here, in the lost history of the black slaves of New York, was a tool for raising questions about racism and exploitation in the modern world.
In similar vein, the Ludlow Collective, in collaboration with the United Mine Workers union, have been studying the Colorado Coalfield Strike of 1913-1914 – one of the bloodiest class struggles in American history. In this case, it is the history of the American working class that is being revealed; and again, as with the African Burial Ground, it is a history that raises questions about the making of the United States that are highly relevant today.

By contrast, Sabloff is at pains to denounce the ideological misuse of archaeology – citing, for example, the distortion of archaeological data in the service of modern nationalism and its ‘invented traditions’.

The intention is worthy, and the book is concise, well-written, and replete with interesting examples drawn from the rich corpus of American public archaeology. But I detect two weaknesses.

First, I worry that ‘action archaeology’ is too much of a portmanteau term. Sabloff seems to define it in such a way that, potentially, it embraces all archaeology. After all, whatever material remains of the past we investigate, we seek to learn, to derive lessons, to contribute to better understanding of the human condition. Is it really useful to group the contemporary ideological uses of knowledge about the past with occasional practical applications of such knowledge in relation to farming, rubbish disposal, or climate change?

Woolliness is also characteristic of the second problem. Sabloff is rightly critical of simplistic uses of archaeological data. But he commits the offence himself rather often. He argues, for instance, that because much modern warfare is not between states but between groups within states, we can draw usefully on the archaeology of prehistoric chiefdoms to help understand it. Or, talking of urbanism, he suggests that monumental architecture in modern cities is little different from ‘the sacredness of place’ represented by the ziggurats of an ancient Sumerian city.

This really will not do. It is sloppy and ahistorical. It breaks a basic rule of archaeology – that ‘context is all’ – by extracting phenomena like warfare and urbanism from the social totality of which they are part in order to set up anachronistic comparisons. The result is either banal (like a ziggurat, London’s Millennium Dome is a prestige monument), or it is false (like a ziggurat, the Millennium Dome is a ‘sacred place’).

This is a useful book in arguing that archaeology should be relevant, engaged, and active (even activist). However, vigorous rather than rigorous, it is more polemical essay than academic discourse.