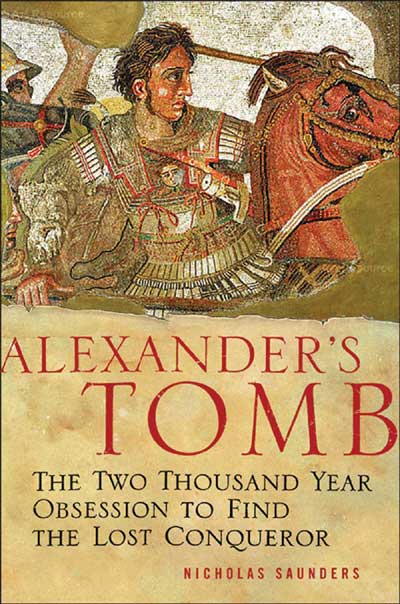 The final resting place of Alexander the Great is one of the famous unsolved mysteries of the ancient world. After he died in Babylon in 323 BC his body was apparently hijacked by Ptolemy and taken to Egypt to be the propaganda centrepiece of his new kingdom. There it stayed for generations until being lost sometime after the Roman Empire converted to Christianity in the 4th century AD.
Nicholas Saunders’ entertaining book examines this beguiling mystery and tries to shine a light on what has become more of a magical idea than a lost archaeological site. Over 2,800 years after Alexander died, his name and legacy are as important and influential as ever.

Through diligent detective work, Saunders pieces together the likely journey of Alexander’s body between Babylon and various sites around Egypt. In what amounts to a potted history of the Hellenistic period, he skilfully describes the changing political landscape and the role played in it by the celebrity corpse.
As the Greek period became Roman many emperors came to pay court to the body of the king, some quiet and respectful, others, like Caligula, grave-robbing for their own pieces of history. As the Roman Empire became Christian, the sources dry up and the site was lost.

The second half of the book looks at the various archaeologists and enthusiasts who have attempted to locate the tomb since its disappearance. We are introduced to characters such as Mahmoud Bey, court astronomer to the Ottoman viceroy of Egypt, who began the search for the tomb on the orders of Napoleon III.

Throughout, Saunders writes in a persuasive style producing a page-turning narrative from a story that has an obviously inconclusive end. He wears his learning lightly and has an eye for an interesting character or situation that will illuminate his tale. He sketches characters very well and one quickly gets a sense of the many personalities involved throughout the centuries long search.

For all of that, this is not really a book for those interested in in-depth analysis of the archaeology. As befitting the search for a lost site the research is text, rather than field, based. In any case, Saunders is more interested in ideas than digs and spends time discussing the politicising of the lost tomb by the Former Yugoslav Republic of Macedonia among other debates.

Having meticulously examined the evidence, Saunders concludes with the thought-provoking question: do we really want to discover the mortal remains of such an inspirational and mythical figure? I went away unsure and suspect that many readers of this diverting and intriguing book will share my indecision.

Review by Stephen Batchelor author of The Ancient Greeks for Dummies,