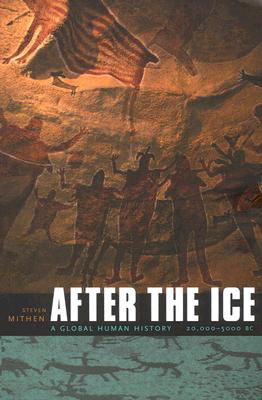 What is the biggest leap forward ever to have taken place in the history of humanity? Steven Mithen, Professor of Early Prehistory at Reading University, believes that it was the explosion of human creativity that took place somewhere in the middle of the last Ice Age – after the Neanderthals had died out, and the only people around were anatomically modern humans. He made the case in his earlier book, The Prehistory of the Mind, which was extremely successful. Now he has set out to tell us what actually happened and in After the Ice he provides what he calls ‘A Global Human History’ from 20,000 to 5,000 BC.
This is a truly mammoth book, over 600 pages, which covers the whole world area by area, starting from Western Asia and Europe then going via the Americas and Australia, through South Asia and finally ending up in Africa.
I particularly enjoyed the chapters on America. Humans arrived late in America: colonised – right at the end of the last Ice Age. In 1933 mammoth bones were discovered in Clovis, Arizona, with very distinctive arrow heads stuck in them.
Since then, Clovis points have been discovered widely in America, often associated with mammoth bones and with radiocarbon dates ranging from around 11,500-9,000 BC. But was there any pre-Clovis occupation? The search for pre-Clovis man has dominated American archaeology for the last generation, and he gives a masterful account of the search.
Virtually all the challenges can be discounted, save that at Monte Verde in southern Chile where there does seem to be clear evidence for human activity at 12,500 BC and possibly even earlier.
Clovis points also seem to be associated with one of the big mysteries of this period: the extinction in America of almost all the big fauna – such as the mammoths, beavers the size of black bears, and camels – that roved America in the Ice Age. Were the Clovis people responsible for the mass extinction of the big game? He assesses the evidence and brings in a verdict of not proven either way. Of course the problem is not just in America. Everywhere except in Africa, the megafauna were extinguished: were humans responsible?
This review has concentrated on America, but other parts of the world are similarly covered, describing the sites, the people, and the problems. The book is very well written in an extremely easy style. The one controversial aspect is that the author invents a sort of ‘Everyman’ to accompany him on his travels around the world. He calls him John Lubbock, after the great Victorian archaeologist and author of Prehistoric Times. The Everyman Lubbock carries with him a copy of Prehistoric Times as he travels through time, visiting the sites and places mentioned in the Victorian tome. Mithen thereby comments on how archaeological thought has moved forward since Victorian ideas of immoral Stone Age savages and suchlike, while also imaging how his modern Lubbock reacts to what he sees.
This blurring of history and fiction is a very fashionable literary device at present, and I must not be an old fashioned grump and say that it does not work. What I would say is that it makes the book too long. When John Lubbock goes plashing through the undergrowth, listening to the birds twittering, I tended to turn off. However, I found that when Steven Mithen was speaking, describing sites and people, and weighing the evidence for and against, I found it fascinating. Steven Mithen has written a magnificent account of archaeology worldwide, and in this first edition of Current World Archaeology I am happy to hail the success of a great World Archaeologist.