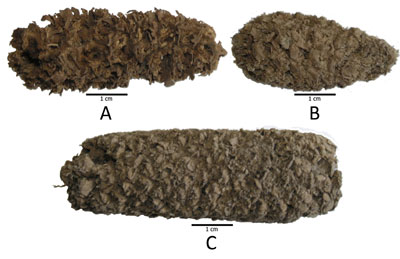 The oldest corncobs unearthed in South America have been found in Peru. Dating to 6,700 years ago – at least 2,000 years older than previous finds of cobs – they were eaten by people who were yet to enjoy the convenience of ceramic pottery.

According to a report in The Proceedings of the National Academy of Sciences, co-authored by Dolores Piperno, the corncobs, husks, stalks, and tassels were found at Paredones and Huaca Prieta, two mound-sites on the arid coastline of northern Peru.

‘Corn was first domesticated in Mexico nearly 9,000 years ago from a wild grass called teosinte,’ Piperno says. ‘Our results show that only a few thousand years later corn arrived in South America where its evolution into different varieties that are now common in the Andean region began. This evidence further indicates that in many areas corn arrived before pots did, and that early experimentation with corn as a food was not dependent on the presence of pottery.’

Along with associated microfossil finds of starch grains and phytoliths, the cobs show that the corn was consumed in a variety of ways, including being ground for flour, though it was yet to become a dietary staple.

‘Because there is so little data available from other places for this time period, the wealth of morphological information about the cobs and other corn remains at this early date is very important for understanding how corn became the crop we know today,’ explains Piperno.