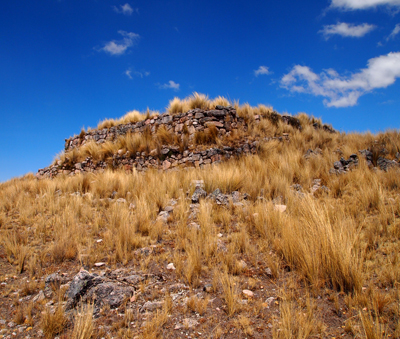 A team of archaeologists, working Peruvian Andes, has hailed as ‘sensational’ the discovery of three ‘ancestor stones’ on an isolated Andean mountainside. For the Inca, such ancestor stones were more precious than gold, and imbued with supreme symbolic significance as representing deities, ancestors, and the sun.

No examples of the stones were believed to have survived until now, and they are mainly known from references in 16th-century Spanish documents, describing them in somewhat contemptuous terms as conical stones, shaped like bowling pins, sugar loaves or pineapples. The 16th-century Inca ruler Atahualpa is on record as responding with equal incomprehension when shown a copy of the Bible by the Conquistadors, which he is said to have thrown onto the ground.

The three conical stones of red and white Andesite, a hard, granite-like rock, were excavated some 2.5m beneath an Inca stone platform known as an ushnu, at Incapirca Waminan. This is one of 20 hitherto undocumented Inca ceremonial sites found by archaeologists as part of a survey of ushnu platforms.

These sacred sites were built high in and brings together experts from the British Museum, Reading University and Royal Holloway University of London, and the University of Ayacucho (Universidad Nacional de San Cristobal de Huamanga).

The sites for such stepped platforms were chosen because of their vistas of snow-capped peaks, which were worshipped as mountain deities. They also had a vertical opening into the body of the earth into which maize beer libations and other offerings were made. At times – when drought, earthquake, or disease threatened, or to mark key events such as the death of an emperor or a victory in battle – such offerings could even consist of a child, selected for physical perfection and sacrificed after ritual inebration.