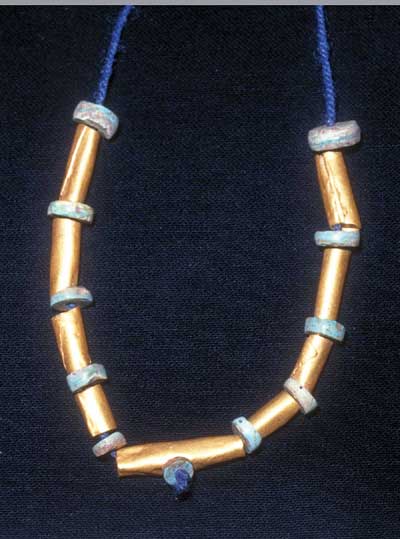 A necklace of long, cylindrical gold beads alternating with small circular beads made of a turquoise-coloured mineral has been found in a grave that dates to between 2155 and 1936 BC at Jiskairumoko, near Peru’s Lake Titicaca. The find, reported in the 31 March issue of the Proceedings of the National Academy of Sciences, is described as the ‘oldest crafted gold artefact known in the Americas’.

Mark Aldenderfer, of the University of Arizona, the leader of the team that found the necklace, said that jewellery and metalworking were associated with sedentary societies and ideas of wealth and prestige. Finding jewellery at a hunter-gatherer burial site ‘suggests that these people were in transition to a more structured, agrarian society’ Aldenderfer said, adding that ‘the find signals an interesting social process that is part of a dramatic transformation towards some kind of inequality’. Evidence of that transition from nomadic or mobile hunter-gatherer to settled farmers comes from finds of domesticated grains and tubers at Jiskairumoko.

The gold’s exact origin is uncertain, but gold deposits are known about 125 miles (200km) from the burial site. The beads were made by pounding nuggets of 95 per-cent pure gold to create a flat rectangle that could be wrapped around a stick to create a tube. ‘This is not hard to do, but it did take some thinking and care and foresight in order to make it properly’, Aldenderfer said. •