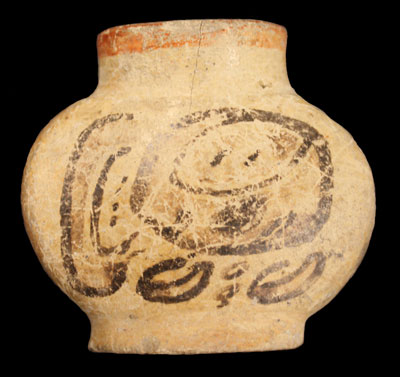 We know, from hieroglyphic references and illustrations, that the ancient Maya and their gods enjoyed a smoke. But physical evidence is rare. Now residue from a 1,300-year-old pot has provided the first traces of tobacco to be found in a Mayan container.

The small clay vessel comes from the Mirador Basin in Southern Campeche, Mexico, and dates to c.AD 700, during the Classic Mayan period. Hieroglyphs on the side of the pot that read y-otoot ’u-may (‘the home of his/her tobacco’) gave the first clues as to its original purpose.

Dmitri Zagorevski, of Rensselaer Polytechnic Institute, NY, and Jennifer Loughmiller-Newman, of University of Albany, NY, used chromatography mass spectrometry and liquid chromatography mass spectrometry methods to analyse residues found inside. They discovered traces of nicotine, a key component of tobacco. As there were none of the chemical by-products associated with smoked tobacco, it appears that the vessel was used for storing it, either in leaf or powdered form, rather than as an ashtray.

The research has been published in the journal Rapid Communications in Mass Spectrometry. ‘Results such as this are extraordinarily useful in the study of ancient traditions and consumption practices, as well as understanding and interpreting Mayan hieroglyphs,’ explained Zagorevski.