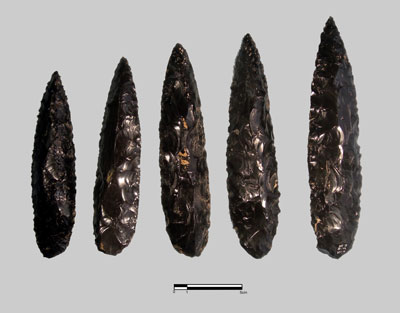 Archaeologists studying 31 obsidian knives from Cantona, a pre-Hispanic site in Mexico, have discovered minute traces of 2,000-year-old human blood, skin, and hair on the blades – the first direct evidence of such tools being used for human sacrifice.

Previously researchers had relied on cut marks on the bones of presumed victims to reconstruct how sacrificial rituals might have been carried out. Now, a newly completed 20-year research project by Mexico’s National Institute for Anthropology and History (INAH) and the National Coordinator of Conservation of Cultural Heritage (CNCPC) has provided new evidence.

Traces of human blood were first identified on the blades in 1993, but recent chemical analysis and examination of tiny samples under an electron microscope has also revealed the presence of muscle tissue, collagen, and fibrin, a clotting protein.

‘These findings confirm that the knives were used for sacrifice,’ INAH conservator Luisa Mainou said. ‘They could have been used in religious ceremonies involving beheading, ritual mutilation, and dismemberment. Different blades appear to have had different purposes: some had more red-blood cells on them, some more skin, and others more fragments of muscle tissue, collagen or fibrin fibres.’